Only a day after the launch of Apple’s new mobile operating system, iOS 9, a number of new applications aimed at blocking ads shot up to the top of the App Store’s charts. One ad blocker called Peace, from Instapaper founder Marco Arment, soon became the No. 1 most popular paid application across the iTunes App Store immediately after its debut.

But in a move that demonstrates the controversy brewing around the use of ad blockers, Arment has decided to pull Peace from the App Store, saying it “just doesn’t feel good.”

The decision is a startling one.

Peace was already one of the better ad blockers on the market, thanks to its use of Ghostery’s more robust blocklist. In fact, Arment even forged a special revenue-sharing deal in order to have access to this list, he explained in his introductory post. Most other ad blockers use public host files, he said at the time, which means they aren’t as well-maintained and are also more heavily focused on visible ads versus invisible trackers.

Given the integration of Ghostery’s database, as well as the simple and well-designed nature of the app itself, not to mention the caliber of the developer behind it, the $2.99 Peace app quickly became a top seller. 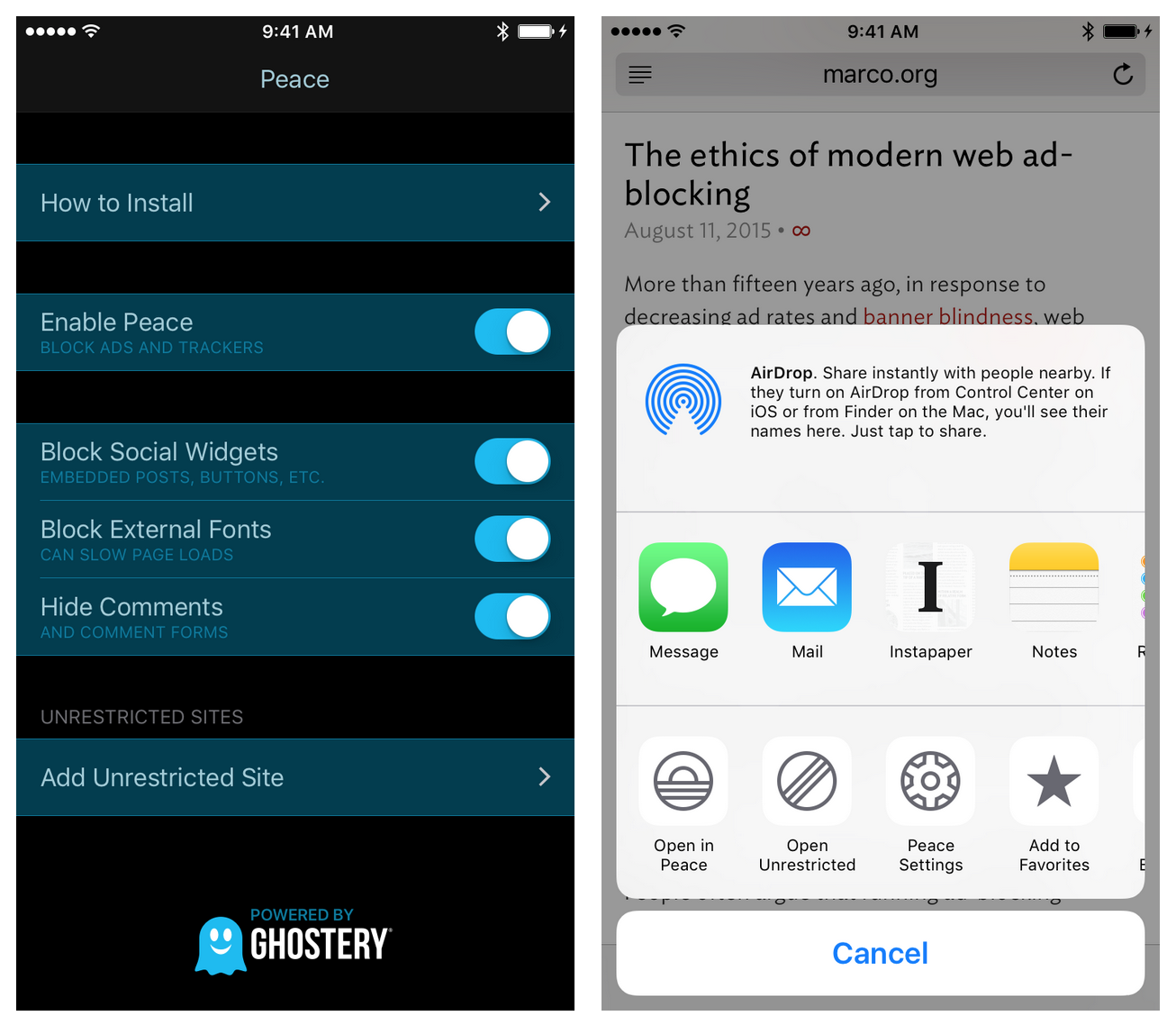 But shortly after its launch, Arment admitted to facing a conflict. The Peace app was blocking ads from his own site’s ad publisher, The Deck. That network includes a number of sites that reach creative and design professionals around the web – like  Arment’s Marco.org blog and his iPhone app Instapaper (which he sold to Betaworks in 2013), for example, as well as other popular fare like Apple pundit John Gruber’s Daring Fireball blog, A List Apart, Dribbble, ffffound, Kottke.org, The Loop, McSweeney’s, MetaFilter, Six Colors, Subtraction, Waxy.org and many more.

In fact, Arment noted that Gruber had tweeted his displeasure with ad blockers that block The Deck by default, given that The Deck’s ads are small, unintrusive, and non-animated, Arment said in a blog post explaining the difficult decision to leave The Deck’s blocking on by default in Peace.

The problem, essentially, is that Arment would have either had to make an exception in his app to not block ads on his site and those belonging to friends, or he would have to leave it on and anger his own site’s advertiser (and his friends.)

He opted to leave it on, but called the decision “uncomfortable.”

Apparently, it was too uncomfortable. The next day, the Peace app is gone.

Arment says he still believes ad blockers are necessary, but the current all-or-nothing approach hurt some who don’t deserve it.

“Ad-blocking is a kind of war — a first-world, low-stakes, both-sides-are-fortunate-to-have-this-kind-of-problem war, but a war nonetheless, with damage hitting both sides,” he writes. “Even though I’m ‘winning,’ I’ve enjoyed none of it. That’s why I’m withdrawing from the market.”

If you already downloaded the app, you can continue to use it. Arment tells us the app will work indefinitely, although it will stop getting updates to its tracker database at some point.

Those who bought Peace can now ask for refund, he also notes. Not everyone will go through the trouble of asking for a refund, of course, which means that Arment will still likely pocket some decent income from his efforts, given that it takes a surge of downloads –  thousands, in fact – to reach the No. 1 position.

According to market intelligence firm Apptopia, in the last 36 hours, Peace’s ad blocker made around $113,521 worldwide. That equates to nearly 38,000 downloads, says Apptopia founder Jonathan Kay.

Arment disputes these figures, however, saying that while he doesn’t have today’s sales report yet, that estimate is “almost certainly far too high.” Plus, he points out, he still needs to pay “substantial portions of the revenue to other people,” including Apple, Ghostery, to taxes, a designer, lawyer, and accountant.

In other words, whatever the payday might have been, it’s not as good as it initially sounds.

With Peace out of the running, other popular ad blockers have moved up the charts instead. Today, the $0.99 simple blocker Crystal is the top paid app, followed by No. 4 Purify, and No. 20 Blockr.