Uber would not be a reliable service if it didn’t implement surge pricing. Well, at least that’s what Uber is suggesting in its recent case study on surge pricing. Surge pricing is an increase of fare that kicks in when there’s a high demand of Uber ride requests, but not a lot of drivers on the road.

“We found that, without surge pricing, Uber is not really Uber — you can’t push a button and get a ride in minutes,” Uber researchers Jonathan Hall and Cory Kendrick wrote on the Uber blog.

To figure this out, Hall and Kendrick, along with University of Chicago Booth School of Business Assistant Professor of Marketing Chris Nosko, took a look at what happened when a glitch in Uber’s system caused surge pricing to go down for 26 minutes in New York on New Year’s Eve last year, and compared that to a similar scenario in terms of demand (after an Ariana Grande concert ended) when surge pricing was working.

When Uber experienced a surge outage on NYE, estimated times of arrival drastically increased and the number of rides completed fulfilled decreased. In fact, less than 25% of people who requested a ride were able to get one. 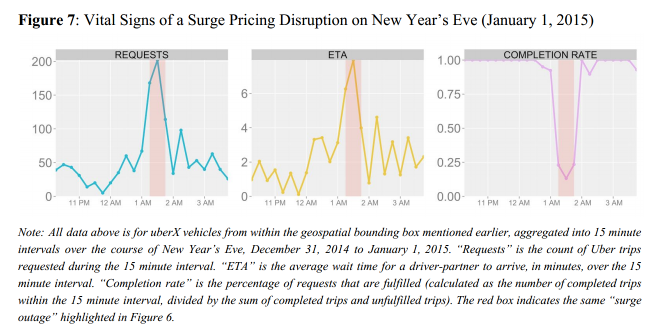 “Drivers were likely less attracted to the platform while, at the same time, riders requested rides in increasing numbers because the price mechanism was not forcing them to make the proper economic tradeoff between the true availability of driver ­partners and an alternative transportation option,” Hall and Kendrick wrote. “Because of these problems, completion rates fell dramatically and wait times increased, causing a failure of the system from an economic efficiency perspective.”

Compare that to the vitality of Uber’s system when surge pricing works. 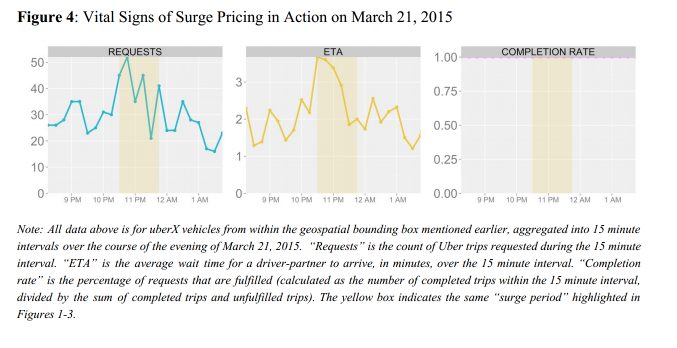 So, Uber’s surge pricing seems to be good for customers. That being said, a different study suggests that surge pricing doesn’t actually increase the supply of drivers on the road. Instead, it just relocates the drivers who already on the road. If that’s the case, that means people in other neighborhoods could get screwed over with longer wait times. In Uber’s Ariana Grande example, it only looked at usage in a “restricted geospatial bounding box” containing Madison Square Garden, which is 5 avenues long and 15 streets wide. So, who knows what the ETAs and rides completed looked like in the rest of New York City’s boroughs.