Now that we can see that the custom emojis on Twitter are an ad unit, there are a few more interesting things to point out about the campaign with Coke.

It appears that the company has leveraged stars of its acquired video platform, Vine, with a lot of them tweeting/vining to their vast number of followers about it. The campaign, while a bit murky, seems to be an attempt to break a goofy (probably non-existent) world record:

Ready for some fun? Tweet #ShareaCoke to help set a new @RecordSetter record for the world's largest cheers. *clink!* pic.twitter.com/9UmY5WrVKE

Here are some Viners:

.@Cody and I are going to get #ShareaCoke trending today, trying to break the record for largest cheers! I'll be fav'ing all tweets! #sp

DM'ing as many people as I can who tweet #ShareACoke to set a new record. There's also a dope little emoji that comes with the tweet 😁😁 #sp

These folks are in on it, too:

my friends at @cocacola are aiming to set a new world record but need ur help! Tweet using #ShareaCoke today and see what happens… #AD

Check it out @cocacola is about to set a new record for largest cheers! Just tweet using #ShareaCoke. I will be retweeting you guys! #sp

Coke is just trying to get the hashtag and emoji combo for #ShareACoke as much reach as possible. Like any ad. Or any other campaign. The custom emojis are just native content…albeit cooler than other native content we get thrown in our faces. Plus, I don’t think there’s going to be an Emoji Ad blocker anytime soon.

This particular campaign is also something driven by Niche, the company Twitter acquired earlier this year. The team is now a part of the brand strategy group at Twitter. That company’s focus was to put advertisers in touch with social media celebrities. Lots of moving parts here, all in-house though for Twitter. Which is huge. All we need now is some Periscope action and this one will go down as a “run of network” campaign. I mean, they just launched web profiles, so I’m sure they’re collecting who their big stars will and could be. 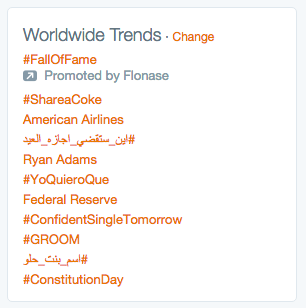 Is it working? I suppose. The #ShareACoke hashtag has been a worldwide trending topic for the past few hours. It’s actually nice to see that Coke didn’t also buy the top trending ad position, they let this one bubble up “organically.” I mean, as organically as it can be with paid celebs tweeting about it.

In other words, the ad group is firing on all cylinders with this one.