CEO Zain Jaffer said that the company has already addressed a number of the issues facing brand advertisers on mobile, but it hasn’t tackled “the fact that app charts change on a daily basis, which is a huge problem if you have to make buying decisions in advance.”

That’s changing with Vungle Premium, which Jaffer said will “allow brands to buy apps like they buy TV.”

The company scores each app’s desirability for advertisers, based on factors like reach and conversion rates. (To evaluate the apps, Vungle uses its own performance data as well as Nielsen Digital Ad Ratings.) The score is incorporated into a billboard listing the top apps of the moment, with new hits added and others removed as their popularity fades. The list can also be filtered based on audience age and gender. 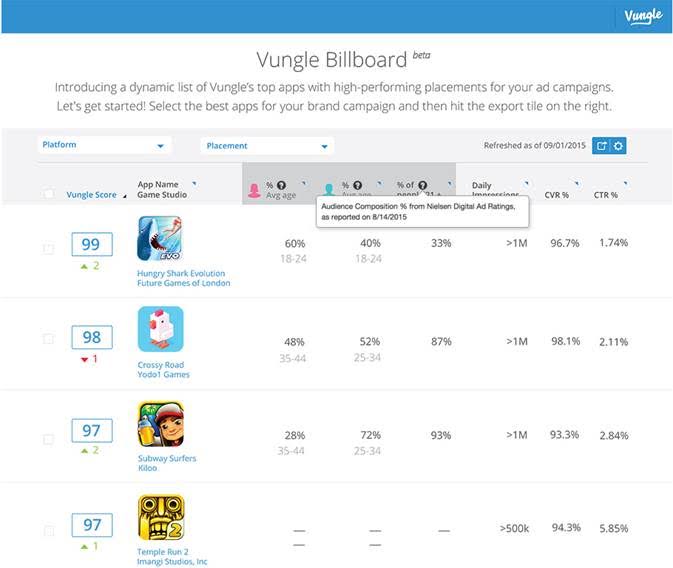 Vungle says the marketplace will give advertisers access to around 100 apps at any one time. Initially those apps include Family Guy – The Quest for Stuff, Crossy Road, Trivia Crack and Temple Run 2.

Digital agency Essence is the first advertiser to use Vungle Premium. In the launch release, Essence’s mobile planning director Jolie Giuffre says that by hand-picking apps from the billboard, Essence can “move with our audience in real-time and stay relevant as new apps enter the marketplace.”