Some big moves ahead for Hyperloop Technologies, the LA-based futuristic tubular transportation startup with high ambitions to rethink high-speed transportation services to “work anywhere and live anywhere and be anywhere”. The company has appointed a new CEO — Rob Lloyd, who had been president at Cisco — and also added another familiar name to its list of advisors. Emily While, formerly COO of Snapchat and an ex-Facebook executive, is joining as a board observer.

Lloyd will replace co-founder Brogan BamBrogan as CEO, who will move to the role of CTO.

The additions come at a time of big growth for Hyperloop Technologies: the company says it is on target to build its first test track by late 2016 / early 2017 in its hometown of LA. And to that end, it says it is currently raising $80 million in a Series B round of funding.

At Cisco, Lloyd — pictured below on Hyperloop Technologies’s site with TJ Ronacher, Shervin Pishevar and Brogan BamBrogan (L to R) — was in charge of the company’s worldwide business, while now he will be digging deep into one vertical, transportation, and forging global relationships and partnerships to build out Hyperloop infrastructure and services — a continuity that Lloyd, in a blog post, likens to the early days of building out the Internet.

When he left, he exchanged some texts with Pishevar, who replied, “Come and change the world with me.”

“This is probably the largest most disruptive compelling vision that I could imagine,” Lloyd said. “Wouldn’t it be amazing to focus building a system and network for the movement of people and things?”

To date, Hyperloop Technologies has raised $11.1 million — modest, considering the company’s bigger capex-intensive ambitions — from investors including Formation 8, new fund Caspian VC Partners, Sherpa, and ZhenFund. Caspian — formed by the Russian businessman Ziyavudin Magomedov who also leads building company Summa — is a new $300 million fund. It is also an investor in Uber and Uber China, among others

Others that are also working on Hyperloop technology include Hyperloop Transportation Technologies and Elon Musk’s SpaceX, which is also contributing research to the concept in the form of a prototype (not connected to either company). You can see more about the next phase of Hyperloop Technologies’ development in the video below.

Lloyd, you may recall, was a long-time employee at Cisco and one of Cisco’s two co-presidents who resigned in June of this year ahead of Chuck Robbins taking on the role of CEO in July. 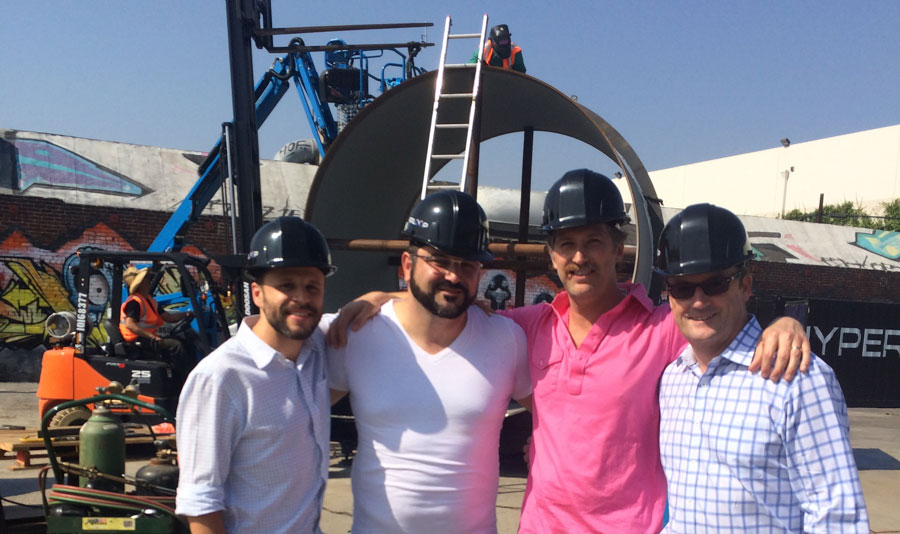 BamBrogan, in his new role as CTO, will be leading a very engineering-heavy team (with 50 employees in all currently) as it goes from “will it work” to “let’s build.”

“2015 was the year Hyperloop went from concept to certainty, and Rob paving the way with the necessary partnerships, capital, and resources ensures that Hyperloop becomes reality. We look forward to 2016 being our Kitty Hawk moment.”

If the test track goes smoothly, the next step will be to partner with governments around the world to build real, functioning Hyperloops. Even though the company is based in Los Angeles, California, it’s not likely that the first project will be in the company’s home state. It has taken 20 years so far to move on the separate, $68 billion high-speed rail project, and wealthier communities, even in Silicon Valley, are radically opposed to project.

“There’s a high probability it will be in a different country, although there are some opportunities in the United States,” Lloyd said. “Naturally, we’re going to move as quickly as possible where the right-of-way and regulatory support are with us.”

With a test-track planned for next year, the company is already running dozens of experiments internally from a levitation test rig that simulates heat and movement of air at 700 miles per hour to miniature tubes with 100 Pascals of air pressure.

Shervin Pishevar — co-founder of Hyperloop, an investor in the company via Sherpa, and co-chair of the board — says that putting a new person at the helm is a natural step for the company has it moves ahead on its global ambitions.

“When I founded this company with Brogan BamBrogan in 2014, we knew that when the time was right we would need a world-class operator to lead it,” said Shervin Pishevar, co-founder, Hyperloop Technologies Inc. in a statement.

“Rob Lloyd is perfectly suited to lead this company given his incredible 20+ year track record of innovating and disrupting. Rob helped build the network that moved bits in the digital era, and now he will help change the world again by building the network that will move people and things faster than ever before possible – we are extremely lucky to have him.”

Others on the board include David O. Sacks, Peter Diamandis, Joe Lonsdale and Jim Messina.