In case you haven’t heard, iOS 9 has hit the streets and is ready for you to download. While it’s downloading, read this thorough review or check out these hidden tricks.

Yep, Apple has made it super simple (and secure) to seamlessly switch from Android to iOS by dropping an app in the Google Play Store. It’s the first app on Google Play from Apple (other than the acquired Beats). The app’s existence was first announced along with the rest of iOS 9’s announcements.

Apple’s going to have to take a bite out of that Android market share lead somehow. This is a pretty damn good start. And a perfect day for it, right?

Note, you won’t be able to move all of your apps over, but hot damn that would have been cool. You can, however, move over your contacts, message history, photos and videos, bookmarks, mail accounts and calendars. That’s more than enough to get you going if you’re making the big switch.

Here’s Apple’s cheery copy from the Google Play Store that I bet at least a few Googlers grunted at:

Everything about iOS is designed to be easy. That includes switching to it. With just a few steps, you can migrate your content automatically and securely from your Android device with the Move to iOS app. No need to save your stuff elsewhere before switching from Android. The Move to iOS app securely transfers all kinds of content for you.

And my favorite part…

And my second favorite part, the comments… 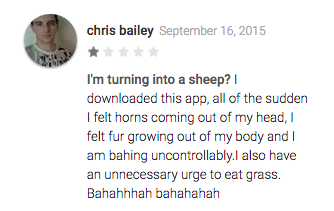 When you are ready to move from Android to iOS, the app creates a private Wi-Fi network that lets you find your Android device from your new shiny iOS one. Drop in the security code and stuff will start transferring. It’s magic!