Jet.com, the e-commerce newcomer that’s taking on Amazon with the promise of lower prices (fueled for now by hundreds of millions in venture funding), is off to a strong start, according to a new report out this morning. Following Jet’s launch in late July, the site has already moved up to become the number four marketplace in terms of sales, which means that, after just over a month, it’s already larger than marketplaces like Sears, Best Buy, Newegg, Tesco, and Rakuten.

This data is being reported today by ChannelAdvisor, a company that helps merchants sell their products on online marketplaces like eBay, Amazon, and others. By tracking the transactions from its customer base of third-party sellers using its platform, ChannelAdvisor is able to gain insights into a given marketplace’s gross merchandise volume.

Based on this analysis, ChannelAdvisor found that the average Jet.com seller’s sales are twice that of those on Sears or Newegg – marketplaces that have been operating for years.

“It’s not out of the realm of possibility that in 2016 it will be our number 3 marketplace, after Amazon and eBay,” says ChannelAdvisor CEO David Spitz. “That would be remarkable.”

ChannelAdvisor notes that its sellers have already seen tens of thousands of unique customers buying on Jet since its public launch, and are seeing a 23 percent repeat buyer rate. That speaks well to Jet’s ability to retain its early shoppers.

After all, it’s likely that a number of customers would visit Jet.com right after its launch and give it a try in order to see how the site worked and if it was living up to its promises, but the repeat buyer rate indicates that a good percentage of customers are finding the values on Jet compelling enough to return, Spitz explains.

Of course, the sample size related to Jet.com’s user base is small, given how the marketplace’s age, Spitz points out, but the numbers are still telling. 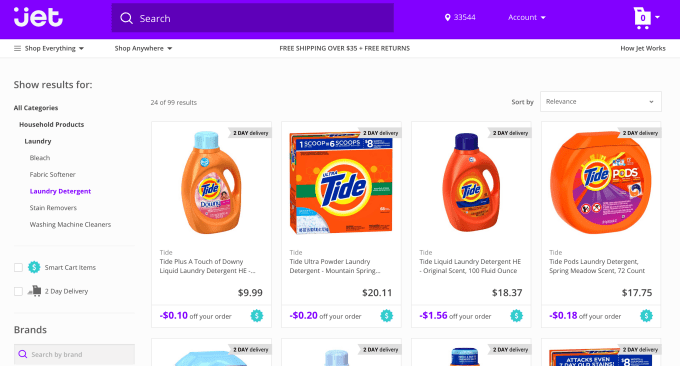 However, if Jet’s strategy is to lure customers away from Amazon, that, so far, has not happened. Spitz also says that they’re not yet seeing any cannibalization of Amazon or eBay sales at this time. In other words, people are buying on Jet, but their purchase rate remains consistent on Amazon and eBay. That could mean that Jet is succeeding instead in gaining customers who would have otherwise bought products via other discount marketplaces, like Costco or Sam’s Club, for instance.

All this being said, ChannelAdvisor’s data is only one window into Jet’s performance, but not one that paints a full picture of the e-commerce company and its overall progress. That’s because only some of Jet’s products come from third-party sellers, like those who use ChannelAdvisor’s platform.

While in some cases, products sold on Jet come from its own inventory or those from partner retailers, there are also times when Jet will buy products from other websites it’s not working with and then ship those products to its customers. That’s expensive to do – and the retailers aren’t even always aware it’s happening (or happy about it) – but the idea is that this is part of Jet’s plan to build scale.

At launch, Jet was filling only a third of customer orders itself, another third from partners, and the rest through this “concierge” service where it would buy from other sites.

Customers, meanwhile, are being wooed by Jet’s “smart cart” feature which helps them find additional savings when filling their online cart with more items. (Under the hood, Jet is calculating whether or not products can be shipped together from warehouses closer a customer’s address, which allows it to discount items, it says.)

Founded by Quidsi (Soap.com, Diapers.com) founder and chief exec Marc Lore, Jet’s model means the company is operating at a loss until it reaches scale. Lore has said before that when Jet reaches $20 billion in products per year – which he expects it to do by 2020 – it would have 15 million paying customers, who would pay its membership fees of $50 per year. And only then would the e-commerce company become successful.

But what’s still unclear in these early days if whether or not Jet’s current customers will stick around for the long term. While the sales figures and repeat buyer rates are promising, most Jet shoppers today are using the site on a free trial basis – either 3 or 6 months, depending on when they signed up. When it comes time to pay the annual fee, not all will convert to paying members.