The concept of incentivized traffic for app–install campaigns is far from new, but there is still much debate in the industry regarding the advantages comparing rewarded versus non-rewarded campaigns.

As an app developer or marketer, you must be baffled asking yourself what is the golden rule? When is sponsored advertising better than non-sponsored? Could I (or should I) use both? Is there a way to get all the advantages and none of the disadvantages?

The incentivized ad model (or sponsored, rewarded or value exchange) rewards a user in exchange for completing an action — such as installing an app, completing a video ad view, engaging with an app, registering for a website, etc. The reward is typically virtual currency or a game item, an upgrade or a discount on a product/service.

The non–incentivized ad model promotes the app without the exchange of a reward, meaning that engagements generated with the app were solely out of initial interest in the app, yet there is no guarantee the user will complete any further action.

Incentivized installs: The main advantage of sponsored installs lies within the masses of installs you can quickly generate. Implementing rather simple targeting methods, you are able to address a fairy relevant user base and boost the number of installs very quickly.

Another crucial advantage is that they are extremely cost-effective, as Cost-Per-Install (CPI) for rewarded installs is significantly lower than that of non-rewarded CPI.

Non-incentivized installs: The main advantage associated with non-sponsored installs is the average user LTV (life-time value). As the installs are generated by users who get no external benefit for their install, they are considered somewhat an “organic” traffic, and, therefore, have a genuine interest in the app, and are more likely to keep and use it.

However, as mentioned above, non-rewarded installs are significantly more expensive than rewarded campaigns, and ROI is not as immediate. So which is best?

Whether to go with rewarded or non-rewarded advertising depends on the objectives, time frame and resources allocated to your campaign. It is not necessarily an either/or situation, and there are several options to enjoy the best of ALL worlds:

When is sponsored advertising better than non-sponsored?

Many app developers and marketers find that reward-based campaigns are a great way to exponentially increase the number of downloads in a short time frame and in a cost-effective manner. They then follow that using a lower-volume, non-rewarded campaign aimed at user retention, maintaining an active and engaged user base and ongoing gradual “organic” growth.

Such campaigns also can be used to re-engage and retain app users that may have lost interest and decreased usage of your application.

As described above, the main advantages of incentivized campaigns are their cost-effectiveness and the ability to generate massive quantities of installs in a relatively short period of time. The shortcomings lie in that users may install your app only for the reward, and uninstall it a few days later.

Non-incentivized traffic, on the other hand, is much more costly and does not deliver as immediate results.

So is there a way to win it all? Can you generate massive installs and ensure your new users actually engage with your app? The answer is rewarded CPE (Cost Per Engagement).

When you launch a sponsored CPE campaign, you obtain all the advantages of a non-sponsored CPI campaign in terms of quality user engagement (the user is rewarded only when having completed some pre-defined usage of your app) and the benefits of cost efficiency and high conversion rates of a sponsored campaign. 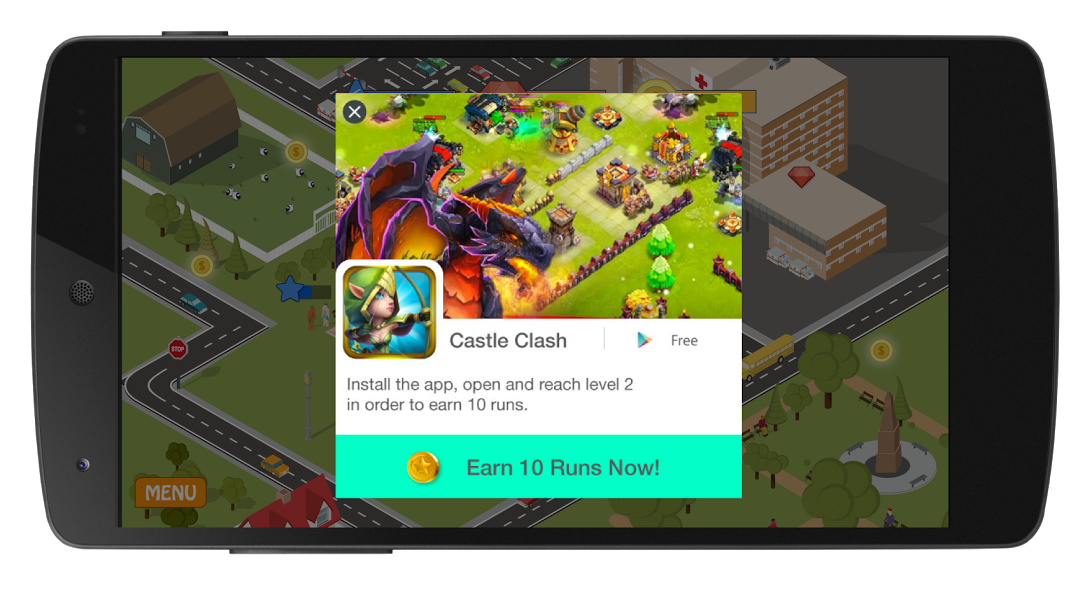 If your app is good, intriguing and will generate the users’ interest — you instantly get an engaged user base who actually tried and liked your app, while enjoying all the benefits of an incentivized campaign!