Yesterday afternoon I attended London-based Entrepreneur First‘s fourth Demo Day. EF isn’t an accelerator, co-founder Matt Clifford was at pains to out. Instead, the self-described “talent first” investor sources the best technical talent from across Europe — typically straight out of university but also working at existing tech companies — before they have a team or a fully developed idea.

It is this “pre-team, pre-idea” model and an emphasis on turning raw technical talent into entrepreneurs that arguably sets EF apart from traditional accelerators. Investors seem to be warming to the model too. In July EF announced it had raised an £8.5 million fund, investment that will enable it to scale up its programme, including backing and mentoring 200 or so people per year over the next three years.

The choice of venue for EF’s latest Demo Day also provided an interesting backdrop. The event, aimed mostly at investors, was held at the ‘Silicon Roundabout’ offices of satellite company Inmarsat, a British technology success story that harks back to 1979.

Meanwhile, on stage we were pitched a tiny slice of the future in the form of robots, 3D modelling to help with cancer surgery, and Augmented Reality-powered books for children. And they’re just my own futuristic picks. There were also startups tackling problems related to cyber security, customer feedback, compliance, translation, and the thorny issue of video content monetisation.

But before I provide a brief run-down of the 9 teams that presented, here’s a quick reminder of what EF offers. The 6 month long programme provides successful applicants a monthly stipend for living costs while they find their co-founders and decide on an idea. This is then followed by £17,000 in pre-seed funding, in addition to office space, legal and administrative support, and mentoring and advice from the EF team and external entrepreneurs from the wider U.K. startup scene.

One EF investor and mentor I bumped into — a successful and seasoned U.K. tech entrepreneur — was excited by what she had just seen pitched on stage and seemed bullish about EF as a whole. In fact, everyone I talked to about EF and its founders Clifford and Alice Bentinck appear to unreservedly like what they are doing, at least in an altruistic sense. The question remains, however, whether or not in the long run EF will make much money for investors. Less than four years in, just like any early-stage fund, it is too early to tell.

To that end, I’m told that 37 alumni companies have raised over $40 million with a total valuation of $170 million. Alumni include the founders of AdBrain, which raised $9 million from investors including Octopus Investments and Notion Capital, along with Pi-Top, Tractable, Code Kingdoms, and Magic Pony Technology, to name a few. 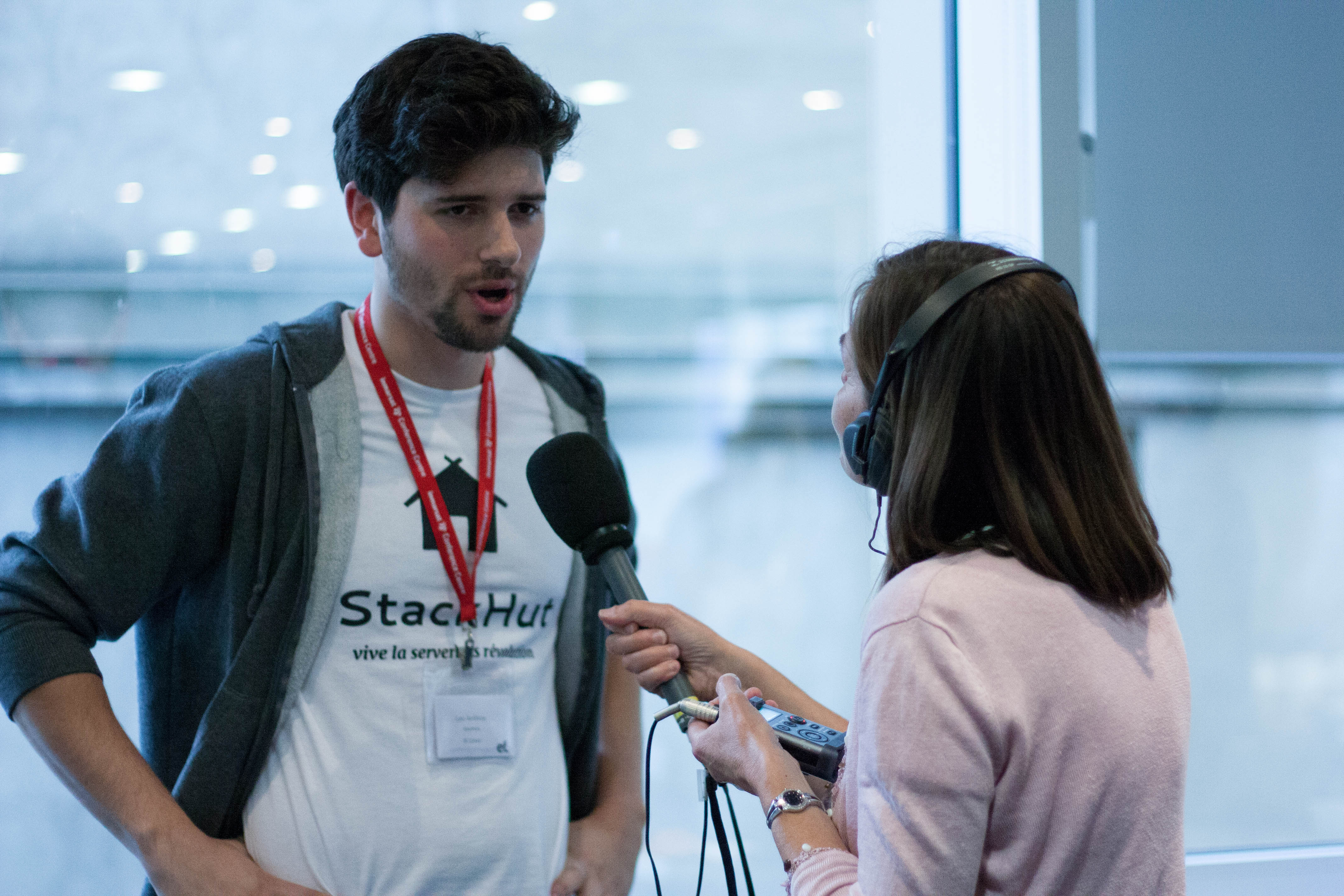 In their own words: “StackHut lets anyone deploy code in any programming language without worrying about spinning up new servers or scaling their system.”

Despite a slightly shouty presentation, the value proposition was clear. Taking advantage of new developments in cloud computing, StackHut promises to save developers time by letting them “focus on the business logic, instead of spending time with server/API logic”. And whilst I’m not a developer and can’t say for sure how unique or defensible StackHut’s technology is, selling picks ‘n’ shovels during a developer gold rush is rarely a bad business idea.

In their own words: “Fluently helps people find the perfect translator for content, without the hassle of dealing with an agency.”

Startups tackling translation as a service isn’t exactly a new idea, although Fluently were confident they have the team and technical chops to offer something better. Citing expensive and slow translation agencies as their main competitors, what is beyond doubt is that translation / localisation of apps and online services is a growing industry that shows no signs of slowing as the world gets smaller.

In their own words: “Chattermill makes customer experience easy to digest data for businesses. No more trawling through spreadsheets you can now get customer feedback instantly and understand how your customers feel.”

I’ve been pitched a few startups playing in the ‘how to track customer feedback and sentiment’ space lately. What is clear is that customer feedback data, like content on the web as a whole, is growing exponentially and is difficult to track in a scalable and useful way. Chattermill’s approach is survey driven but with questions purposely more open-ended. The company reckons this leads to more actionable and nuanced feedback, while its tech promises to help companies efficiently make sense of the data garnered.

In their own words: “Status Today helps companies detect abnormal behaviour and prevent leaks of sensitive or proprietary information.”

A very confident pitch from this cyber security startup with notable academics on its board of advisors. Citing recent breaches at Sony, Ashley Madison, and even the U.S. government, Status Today says that most security issues start with people, including insider jobs. Its tech provides security officers at companies with a way to monitor what people are doing on their networks and, crucially, alert them of unusual activity so that a breech can be stopped in its tracks.

In their own words: “Soapbox aims to be the way that beauty vloggers can monetise their content effectively. It connects viewers with the products that they see in the vlogs so that they can buy them instantly.”

The pitch was that beauty video bloggers leave a lot of money on the table as millions of views on YouTube doesn’t always equate to hard cash for those that produce the content. Soapbox’s solution appears to be to create a video destination app/site where video bloggers can make it easy to buy the products they feature and take an affiliate cut along the way. The difficulty the startup will face, however, is that content isn’t king, distribution is. And YouTube is an 800-pound gorilla in that regard.

In their own words: “PassFort makes Know Your Customer compliance a 30 second process, reducing the amount of information that needs to be collected.”

“Stripe for compliance” was the pitch. And it was a compelling one. Adhering to compliance legislation, such as anti-money laundering and KYC, is a massive drain on resources for startups and companies offering financial services and other products where there are legally required checks that have to take place. Sexy this isn’t, but a large business perhaps.

In their own words: “Dara Technologies is creating an interactive storytelling experience which kids can shape to their own liking.”

Parents and others continue to spend a lot of money on children’s books, but children spend less and less time reading them, at least compared to “screen time”. Or so says Dara Technologies. The solution? Combine both with the use of Augmented Reality to bring books alive.

The demo I saw was impressive, but the startup’s plans to become a consumer-facing brand/book publisher in their own right, rather than licensing the technology or building a platform, is ambitious to say the least.

With that said, Dara Technologies have neighbouring Lost My Name for inspiration. The personalised book publisher recently raised a $9 million Series A round led by Google Ventures.

In their own words: “Innersight has developed a machine aided technique for surgeons to visualise cancer and improve surgery outcomes.”

I really liked what these guys are doing and spent quite a lot of time afterwards drilling into Innersight’s technology. Essentially the startup has developed software that extrapolates a 2D scan, such as a kidney scan, into a 3D model that can run on a surgeon’s laptop. The idea is that the surgeon can get a much better visualisation of where a patient’s tumour is and make better decisions on how best to remove it.

This extra data should also lead to more keyhole surgery, which in turn will save money (as well as lives). The biggest challenge, says the startup, is persuading surgeons to change their workflow and embrace Innersight’s software over the 2D scans they are accustomed to. 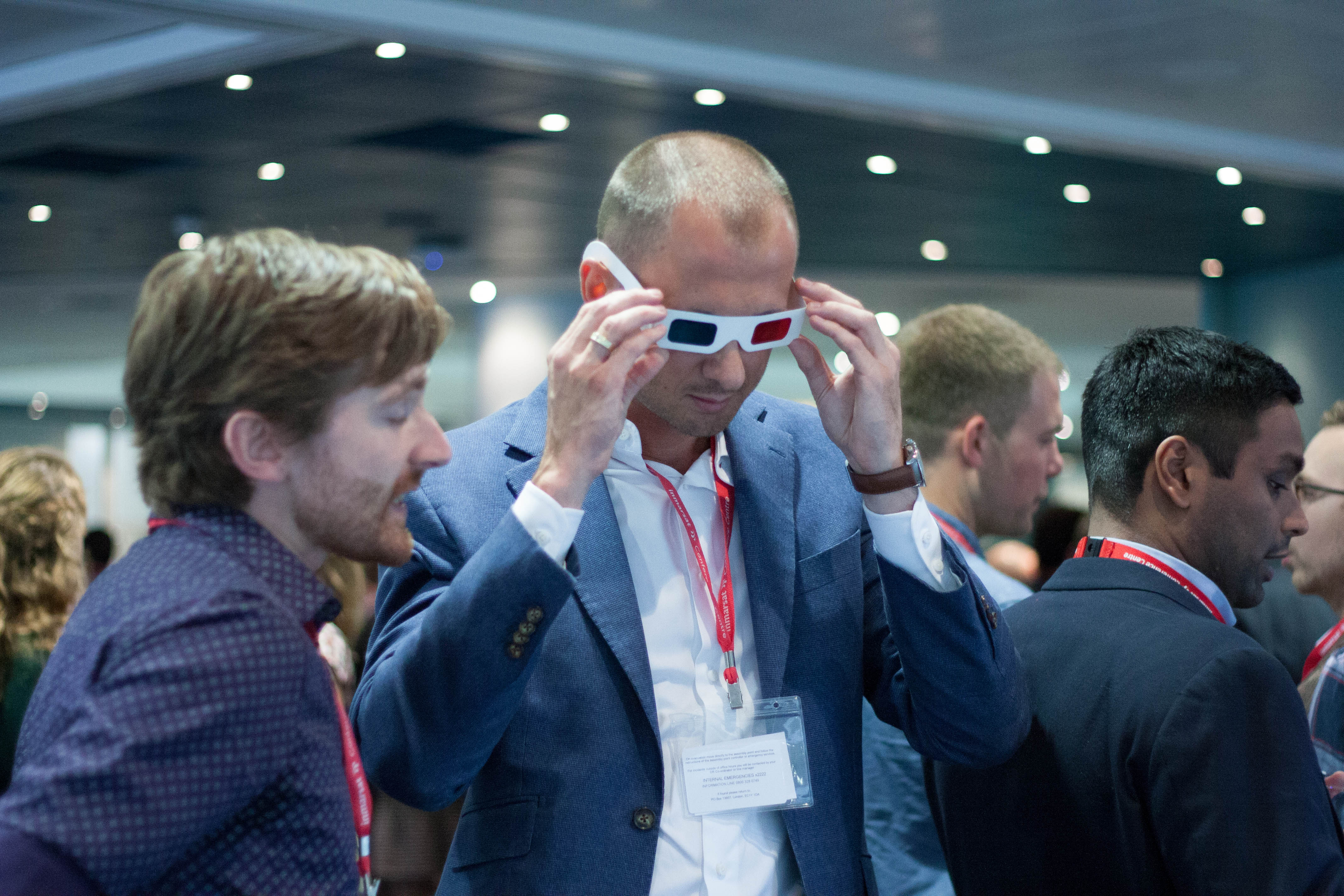 In their own words: “Automata is giving robotics its iPhone moment. They have created a robotic arm called Eva after 10 years working at Zaha Hadid’s architecture studios.”

The “iPhone moment” is perhaps a bit of a stretch, but refers to the way Automata wants to enable companies to create a robotic app for anything. What the startup offers in reality is a robotic arm that can be programmed almost as easily as moving its joints to carry out the required task, after which those motion points of reference are stored and used to automate the task going forward.

In one example, Automata showed a woman working in a t-shirt printers whose sole job was to move t-shirts from one adjacent factory machine to another. A job for a robot, surely? If it wasn’t for the prohibitive up front cost. By 3D printing its own robotic arm, dubbed Eva, coupled with easy to program software, Automata aims to “democratize robotics for the SME & consumer markets’.