Apple put on a big event today in San Francisco to show off its new lineup of products and updates — from Apple Watch bands to the iPad Pro to the new Apple TV. Apple released a bunch of new Watch bands, showing off a wide range of diverse colors. Unfortunately, the same cannot be said for the people, mostly from Apple’s executive team, who took the stage to announce them. In short, there was a lot of diversity missing from Apple’s event today.

white guy #4 is talking about designing for pregnant women

By the end of the keynote, there were a total of a gazillion white men (13, according to my count), one Cuban American guy (Eddy Cue), one Asian man, who didn’t actually say anything, and three white women. The first woman who took the stage was Irene Walsh of 3D4Medical, who gave a demo of the company’s Essential Anatomy app using the Apple Pencil. The second woman on stage was Jen Folse from the Apple TV team, who gave a demo of the new Apple TV. The third was Gilt CEO Michelle Peluso, who demoed how the app works with the new Apple TV.

Unfortunately, there were a grand total of ZERO black people on stage. And the event was problematic in other ways. At one point, Adobe Director of Design Eric Snowden forced a woman to smile via Photoshop, thus “fixing” her face with its new tool Adobe Fix.

Though, this white dude from Adobe, VP of Products and Community Scott Belsky, seemed to find it funny. 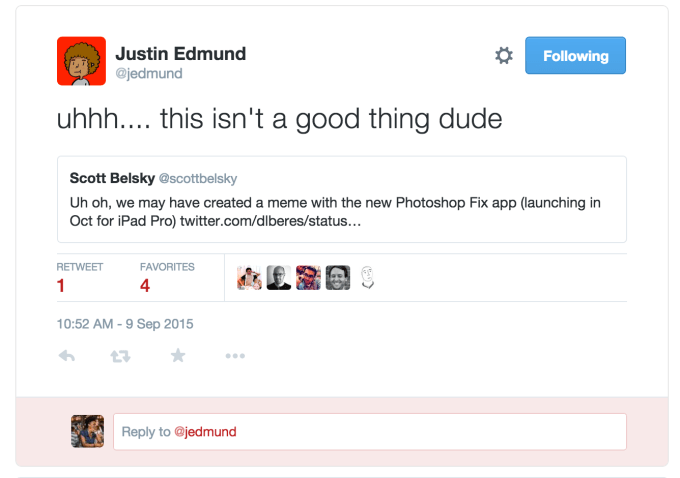 Last month, Apple announced its most recent diversity numbers, which showed slight progress in terms of hiring people other than white men. In the last year, 11 percent of Apple’s hires have been black, 13 percent have been Hispanic and 19 percent have been Asian. At the time, Apple CEO Tim Cook recognized that there’s still “a lot more work to be done.”

Dear Apple, you can and should do better next time. Kthx. I’ve reached out to Apple for comment and will update this story if I hear back.