Zomato, the India-based restaurant discovery site, has closed $60 million in new funding as it looks to further its push into new verticals including food delivery, payments, table reservations and more.

This latest round is lead by new investor Temasek and includes participation from existing backer Vy Capital. Zomato raised $50 million back in April (at a billion dollar-plus valuation, no less), and this latest infusion of money takes it to over $220 million from venture capital firms. (Sequoia India and Info Edge are its other shareholders.)

The company’s core service is a restaurant discovery site that covers 1.4 million restaurants across 22 countries, including the U.S., where it acquired Urbanspoon from IAC and closed it down. Zomato said that staple business attracts over 90 million visits each month, but it has begun to move beyond that and into related areas. It introduced food delivery services in India this summer and Dubai last week, having announced a move into that vertical back in February, and has trialled in-restaurant payments in the Middle East. Earlier today it rolled out a service that lets restaurants use its platform to create white-labelled apps and services in a further indication of its plans to offer delivery services. 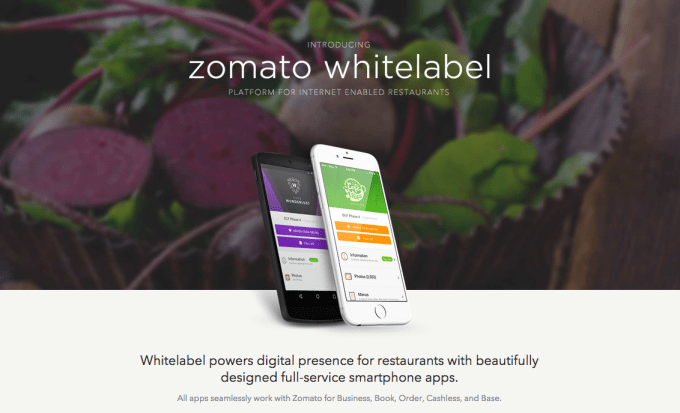 These areas are exactly where it will be strengthening with this new funding, according to a statement from CEO and co-founder Deepinder Goyal:

We will use this round to make investments in our new businesses such as online ordering, table reservations, point of sales, and our newly launched Whitelabel platform. With this round, and with some of our markets turning profitable recently, Zomato is well capitalised for at least two years. We are also stoked to have Temasek partner with us, and are looking forward to building one of the largest food-tech companies in the world.

As regards international expansions of these new services, Zomato said online ordering will roll out in Australia and South Africa later this month, while it “will soon be taking [its payment service] to a lot of other countries” — minus India, where two-factor authentication is required for digital payments. Finally, its table ordering feature is slated to arrive in Australia and the UK ahead of a broader global rollout.

It isn’t just new services on Zomato’s plate, the company has already begun investing in logistics and delivery, too. Aside from today’s new whitelabel platform, it announced undisclosed investments in two complementary startups in India last week — hyperdelivery services Pickingo (in Gurgaon) and Grab (Mumbai) — and sealed a partnership with up-and-coming e-commerce enabler Delhivery.

Zomato’s primary competitors in India are TastyKhana, which Rocket Internet-backed FoodPanda snapped up earlier this year, and Tiny Owl, another Sequoia-backed company which raised $16 million in February. Elsewhere, it battles Yelp in many global markets.

The original version of this article has been updated to correct the size of the round. Apologies for any confusion caused.