Gaurav Jain Contributor
Gaurav Jain is one of the founders of Afore Capital, a $124 million fund focused on pre-seed. He was also an early product manager for Android.
More posts by this contributor

Facebook, Google and Twitter have to deal with outrageous amounts of spam and abuse. They hire teams of engineers to stop trolls, outwit bad actors and otherwise keep their walled gardens free of misanthropes. It’s a costly business.

Pete Hunt, Josh Yudaken and Julian Tempelsman worked on anti-fraud technologies at Facebook, Instagram and Google; they dealt with phishing, hacking and other challenges on a daily basis. Huge teams of Full-Time Employees, or FTEs, are charged with stopping these attacks at other companies, and it’s easy to imagine millions of dollars per year being spent on the problem. When Hunt, Yudaken and Tempelsman realized that most startups couldn’t afford to have anti-abuse teams of that scale, they quit to start a company called Smyte.

Now, the knowledge of the world’s leading experts is available as an API for a fraction of their former salaries. We thought it was a great team and a great idea, and eagerly invested. But more importantly, it helped us crystallize an idea about how the startup landscape is changing.

In The New World, FTEs Will Become APIs

The team at Smyte isn’t alone. Much has been made about how the dropping cost of website infrastructure has spurred a boom in startup formation, with Amazon Web Services held up as the prime example. The capital cost of servers has been eliminated, but even more important is the plummeting human cost.

A decade ago, a VP of engineering at a startup might have evaluated the resumes of five solid front-end engineers. Five years ago that VP would have looked at GitHub profiles. Today, they are just as likely to evaluate a front-end framework like Ionic, Meteor or Aurelia and build it themselves.

It’s not just front-end options. We’ve seen a massive proliferation in frameworks, libraries and other tools that allow a single talented engineer to do the work of a team.

Companies and products like Heroku, Celery, RabbitMQ, Mandrill, Fastly, Chartio, Chargebee, Shipwire, Docker, Codeship, Rainforest QA, Replicated and Chartbeat have changed the nature of tech development. These are just a small subset of services that replace the work of individuals or entire teams. You could probably find most of them represented as laptop stickers in a single San Francisco coffee shop!

APIs For All KPIs

This trend applies as much to marketing and front-office activities. Sawhorse Media spends $55,930.08 on SaaS services every year. That may seem like a fortune for many startups, but imagine trying to find a single employee that could cover all those bases for that sum? 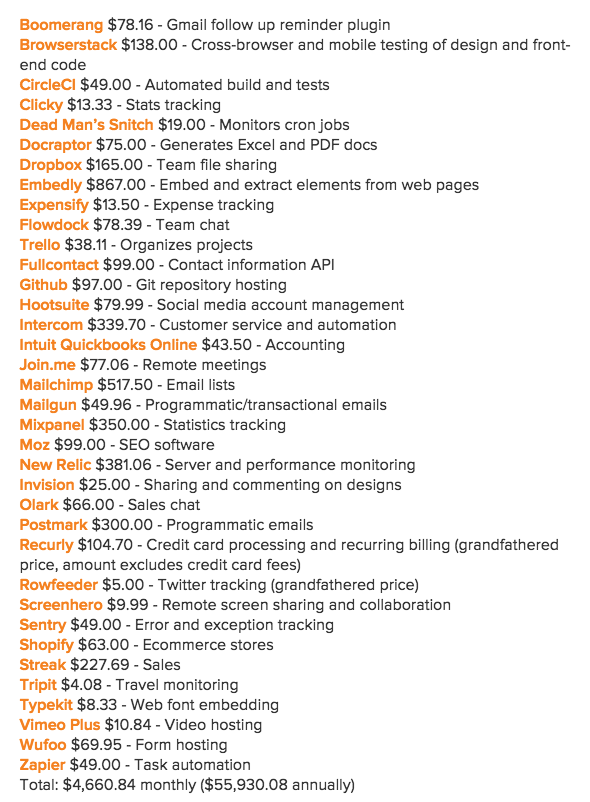 In the absence of these service, startups would have to hire one or more employees to fill the role. Instead of bringing on new employees, they can empower a small team of engineers and designers to multiply their efforts using the company credit card.

This trend has pros and cons. It will make life harder for those with only mid-tier technical knowledge. Look at what WordPress has done to “webmasters.” The blogging platform turned CMS has colonized the web, and accounts for ~23 percent of Internet traffic.

A decade ago, a simple marketing task like setting up a website required tech chops. You’d have to write specs, commission a designer and hire a web developer to build it, largely by hand. Today, for ~$10 you get essentially the same basic benefits. You can register a domain and install WordPress with a single push of a button.

Anyone can browse thousands of pre-built themes, many of which are free, with high-end options topping out at ~$100. Plug-ins expand the functionality of a site, and talented developers can be had for almost no money. Nary a line of code needs be written. A massive mid-tier of website creators has essentially been replaced by open source, themes and plug-ins.

But I Can’t Build a Startup This Way…Or Can I?

These tools have made it possible to make almost anything, fairly easily. Sure, building something as complex as Uber is going to be a challenge no matter what, but it’s unprecedented how far these tools can stretch the creator’s power.

A decade ago, building “real-time” services would have necessitated hiring one or more back-end specialists. Today, you can insert a few lines of code from Google’s Firebase and get the same effect. Front-end designers leverage JQuery in much the same way. Tasks that would have made for full-time job descriptions just a few years ago are now bullet points on a job posting.

Anyone with a great idea anywhere in the world can build a billion-dollar tech company.

Imagine the power of tools such as Bubble. While their tagline, “build your startup by pointing and clicking,” might not be applicable to everyone today, I strongly believe that within 10 years we will see at least one unicorn built without writing a single line of code.

APIs are truly democratizing startup creation. Not only will you practically need no money to get started, you won’t need any tech skills either. All you will need is a keen understanding of the user and how to take your product to market. Of course, this has major implications in terms of pace of product development, and the consequent noise in the market, but net-net it’s great for consumers. Anyone with a great idea anywhere in the world can build a billion-dollar tech company. That’s exciting!

There’s been a constant stream of chatter about the lack of STEM (science, technology, engineering and mathematics) training in the U.S., but it seems like the software industry has just decided to design around the constraint. Sure, there is a shortage of talent today, but developers are rapidly finding ways to put future developers out of jobs.

Where The Tech Challenge Is Going

Software development is going to be a lucrative career choice for decades to come. New platforms will ensure that those with deep technical skills will have new challenges.

The promise here is that soon anyone will be able to start a business that can scale wildly. The peril is that the ones that win will only monetarily enrich a tiny number of people.

Disclosure: Founder Collective is an investor in Firebase, Ionic, Replicated, Smyte and Uber.