The mobile revolution may be booming, but not everyone has the same level of access. That’s why major tech companies like Facebook and Google are building out systems involving drones or high-flying balloons to make sure those in developing regions still have the opportunity to get connected. Hoping to capitalize on that trend is LotusFlare, a startup founded by former Facebookers which is working to make the mobile internet more accessible to everyone.

The company today is also announcing $6 million in Series A funding led by Social + Capital. Also participating in the round were seed investors Google Ventures and Metamorphic Ventures. The company previously raised $4 million in seed funding, bringing its total raise to date to $10 million. Now a team of 15 in Palo Alto, LotusFlare will use the funding to continue to scale its business and roll out to new markets.

As a part of the new round, Chamath Palihapitiya will join LotusFlare’s board.

Founded in June 2014 by Sam Gadodia, Terry Guo, and Shao Xia, whose backgrounds collectively include time spent at both Facebook and Microsoft and elsewhere, the idea with LotusFlare is to address the two main challenges that face those in emerging markets when it comes to getting connected to the mobile internet.

For starters, the cost of mobile data tends to be very expensive, which is why users will often buy packs of data in pre-paid chunks which they can use as needed. In addition, there’s also the challenge of simply getting access in the first place – not all areas have cell tower coverage, or, when coverage is present, they may not be getting 3G or 4G signals.

LotusFlare’s solution is in developing a platform that works to improve upon both of those issues.

In terms of the accessibility problems, the company will partner with companies that are developing access technologies – like Facebook and Google – in order to function as a layer that sits in between the technology itself and the local operator’s network. The company plans to get started with this piece of its platform next year in Sri Lanka, not coincidentally the same country where Google Loon is kicking off. 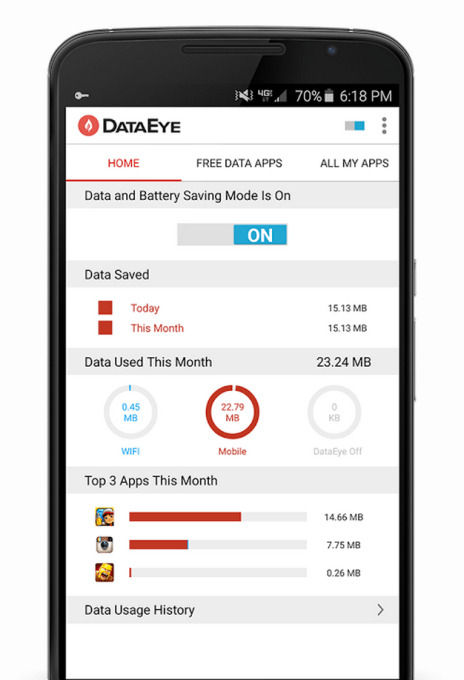 But LotusFlare isn’t just about playing middleman between access tech and operators in the developing world, it’s also rolling out tools directly to consumers that allow them to take better charge of their mobile data usage.

One such tool, an app called DataEye, is already available on the Google Play Store where it has seen around a half a million downloads. This app lets consumers see which apps are using their data so they can control that usage on an app-by-app basis, while also connecting users with popular apps free of charge.

This latter piece involving “Data Free” apps is available when the company has a formalized relationship with a mobile operator.

Gadodia explains that in emerging markets, what some users care about is access to specific apps, not just mobile internet access in general. Plus, he notes, even when a user is not actively using any apps, they still end up losing data because of how apps use data in the background. “And there’s really no intuitive way for me to control how the apps on my device use my data plan,” he says. “What we are doing is creating a platform that addresses those issues for the users.”

The platform sits in the cloud and involves some lightweight integration with the mobile carrier. This enables LotusFlare to offer a host of features that wouldn’t have been available previously.

For example, the company will offer the ability for mobile data customers to share and transfer their data packs to others, while also giving them controls that allow them to consume data per app on a time basis, instead of measuring everything in megabytes, as is common today.

“The unique thing here is the ability for carriers to offer these app-based data packs,” adds Gadodia. That means consumers could buy data packs that give them access to a personalized selection of apps, like WhatsApp, Facebook, YouTube, and Skype, for example.

The company is initially targeting Asian markets as it begins to roll out its platform, but will also focus on some Latin American and African markets. In some cases, the markets will be more in need of apps to control their data usage, while in others, accessibility itself will be the larger issue.

The consumer-facing app will be always be free, while the company itself plans to generate revenue via the software license-based model with operators.

“Internet access is quickly becoming a basic human right,” adds investor and board member,  Chamath Palihapitiya. “The question isn’t why but how. LotusFlare represents the next generation of wireless products and services who can bring this to massive populations around the world at increased capability and lower cost.”