Since Apple finally opened up the system-wide keyboard to third-party developers, back in iOS 8, there has been a flood of alternative keyboard apps — from established Android keyboard brands like Swype and SwiftKey, to newcomers hoping their glitzy GIF/emoji keyboards will make an impact. And plenty others besides.

Well, here’s another one: ReBoard is a just launched iOS keyboard app from an indie dev team in India that’s targeting productivity-focused folk, by adding the ability to reach out to other apps right from the keyboard. So instead of having to double tap out of whatever messaging app you’re using to go hunt for that YouTube link, for instance, you can do a look up right from the keyboard. Ditto image search. And Wikipedia. There’s also a translation function, plus conversion and calculator, and more.

The keyboard can also integrate with other apps such as Slack (if you grant permission), so you could Slack your colleagues without actually having to open up the Slack mobile app. Other supported app integrations include Dropbox and Wunderlist, so you can view your files and reminders from the keyboard. Calendar appointments can also be scheduled right from within the keyboard. So it’s basically turning the keyboard into more of a platform, in and of itself.

“The problem is switching between apps to do some task, e.g. just to schedule an appointment, one has to leave whatever he/she is doing, open the Calendar app and navigate a different UI. Switching between apps not only wastes time but also destroys the current context and puts more cognitive load on the mind,” argues ReBoard co-founder Jeet Singh.

“With ReBoard, tasks like these can easily be completed from within the keyboard window itself without switching apps. Thus staying in the context, getting more peace of mind and being more productive.” 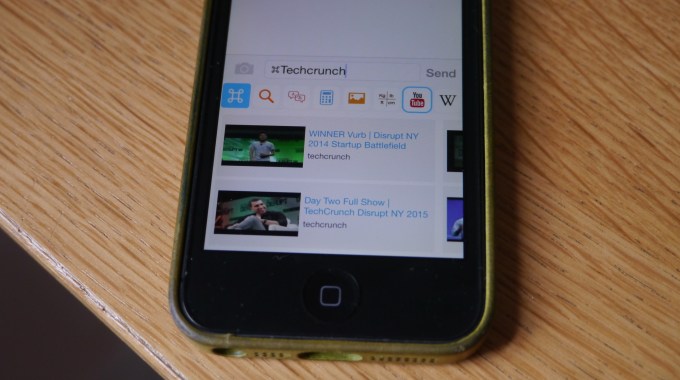 Singh says the third-party services it’s chosen to implement as actions within the keyboard were selected by “studying what tasks a normal user performs on his/her device.”

“Our goal is to integrate all those tasks into ReBoard that a person performs on a daily basis,” he adds. “We’ll be continuously adding more actions by integrating more third-party services by using their APIs. We’ll also consider partnering up with others where it creates value for our users.”

ReBoard’s premise is that putting more functions into the keyboard will save the user time on switching between apps. And it’s a good theory, although it does require users to invest a bit of time to get their head around a new workflow. And be happy to perform actions in a small space. But there’s certainly a use case for quick look ups, or grabbing a link without having to dive out to another app or the browser.

So how does ReBoard actually work? Users of the keyboard type relatively normally for the most part, with the Qwerty offering a few additional gesture-focused tricks to speed things up like word deleting (swipe up on the backspace key to delete a whole word), or alternative characters (swipe up on a key to quick-access its alt char). There’s also a cursor shortcut feature if you press and hold on the space bar to save having to move your finger up the screen to tap where you want the cursor to be.

The biggest difference is the function key that sits above the Qwerty keys. Tapping this brings up the various additional app functions. But it’s a three-stage process to utilize these properly. So, for instance, if you want to look up TechCrunch videos on YouTube you hit the function key, type TechCrunch, then hit the YouTube key. That then brings up a stack of TC YouTube videos which you can scroll through right within the keyboard. Tapping on a video then brings up another menu — with options such as ‘insert link’ and ‘copy link’, or the ability to open the video in the YouTube app or browser. The workflow is the same for other look ups, such as doing an eBay search, or checking something on Wikipedia.

The order of the available actions within ReBoard can be configured via its shell app, which also lets you set the language preferences for the translation action (which defaults as English into Arabic).

In truth, I found the app a bit fiddly to use. The up gesture to delete whole words often doesn’t register, so you end up having to repeat tap it anyway. And the workflow for performing app functions can feel like it’s slowing you down, rather than turbo-charging your efficiency. For instance, if you hit the function key and then an action key, forgetting to type something in between, it will use whatever text is in your clipboard — so can land you inside some random look ups.

That said, once you’ve got the hang of the workflow it’s pretty straightforward, and favored shortcuts would likely feel familiar pretty quickly. And if you’re the sort of person who religiously memorized desktop software keyboard shortcuts, then ReBoard’s workflow is going to feel like child’s play in comparison.

The app is a paid download, costing $1.99. The team is also monetizing via additional in-app purchases (such as offering keyboard themes). Plus, says Singh, they may look at providing custom actions and workflows to enterprise users as a third revenue stream.