Portal, a recently launched Android app that lets you move large files between your computer and your smartphone via your Wi-Fi connection, has today made its way to iOS. The new version offers a better alternative to something like Apple’s AirDrop, for example, as it lets you transfer as many files as you’d like, with no file size limits, while also not counting against your data plan due to its use of Wi-Fi to make the file transfer.

The app is the latest to launch from a company called Pushbullet, which also makes a handy utility that includes a similar feature set. This earlier app moves notifications, links and files between devices, but doesn’t require devices to be on the same Wi-Fi network. That’s useful in some cases, but it also limits what the older Pushbullet app could do – that is, the app couldn’t move very large files or as many files as well as the newer Portal app can today.

The first version of Portal was released this June on Android, and Pushbullet co-founder and CEO Ryan Oldenburg says that it has since seen over 100,000 downloads and is transferring around 30,000 files per day for its users.

Like the Android version, Portal for iOS also works to initiate the file transfers using QR codes. After downloading and installing the iOS app from the App Store, you visit portal.pushbullet.com and scan the code on the screen using the app. Afterward, you can then drag a file from your computer to your web browser in order to transfer it to your phone.

The company says it has tested it with apps as large as 1 GB+ as well as with smaller files ahead of today’s launch. (Note to iOS 9 beta users: you may experience some issues, we should note. Oldenburg says an update will be submitted today to correct this problem.) 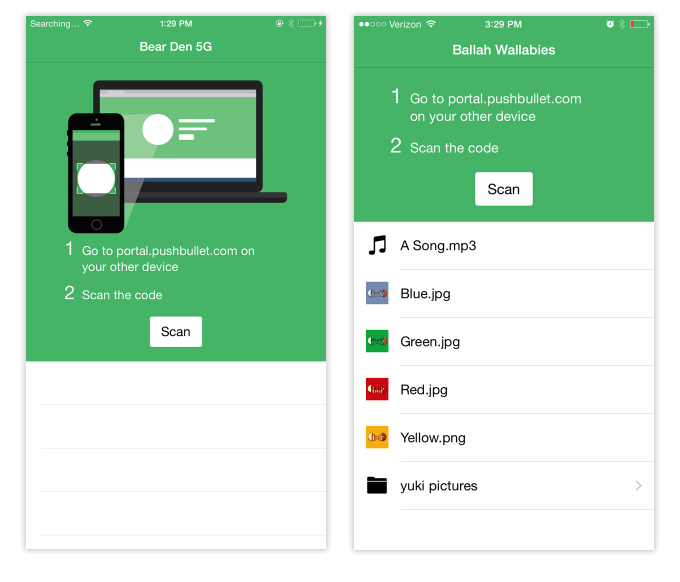 The app allows you to browse, open and share the files after the transfer is complete. The files are also organized the same way you originally transferred them, including maintaining their folder structure. Portal also moves photos into iOS’s Photo Gallery automatically. You can also open the apps saved using iOS’s Share extension, “Open in…” dialog boxes, or by accessing them from other apps that support file pickers, like Pages, for instance.

Oldenburg believes the iOS version is even more helpful to users than the Android release. That’s not just because Android users have a host of alternatives for PC-to-phone file transfers (though several of these require a desktop application or browser extension to first be installed). Instead, notes Oldenburg, “AirDrop doesn’t let you get at your files later and emailing yourself doesn’t make anyone happy,” he says. “Portal lets you use your iPhone as a wireless thumbdrive from any computer.”

The app also offers a low-cost – actually, free – alternative to using a cloud storage service like Google Drive or Dropbox, for example. Though these apps are arguably a bit simpler as they don’t involve scanning QR codes to link devices or require devices to be on the same Wi-Fi network, users also have to pay to host their files on the company’s servers. Portal, meanwhile, is free for the time being. (The company may go the “freemium” route in the future in order to generate revenue by charging for a more advanced feature set.)

In addition, files moved with Portal aren’t being stored on Pushbullet’s servers, so there’s a privacy advantage as well.

Portal for iOS is live here on the iTunes App Store.