It’s been party time for mobile, with massive growth and disruption helping VCs to raise huge funds, entrepreneurs to raise massive rounds, and valuations to skyrocket. With 89 mobile Internet unicorns now worth almost $1 trillion, it’s no surprise that folks from Silicon Valley to Shanghai are asking what’s going on with return on investment (ROI).

While there are many ways to measure ROI, let’s look at the ratio of exits to investments, the total amount invested and ROI across all 27 mobile sectors for the last five years.

The Downward Road Is Crowded 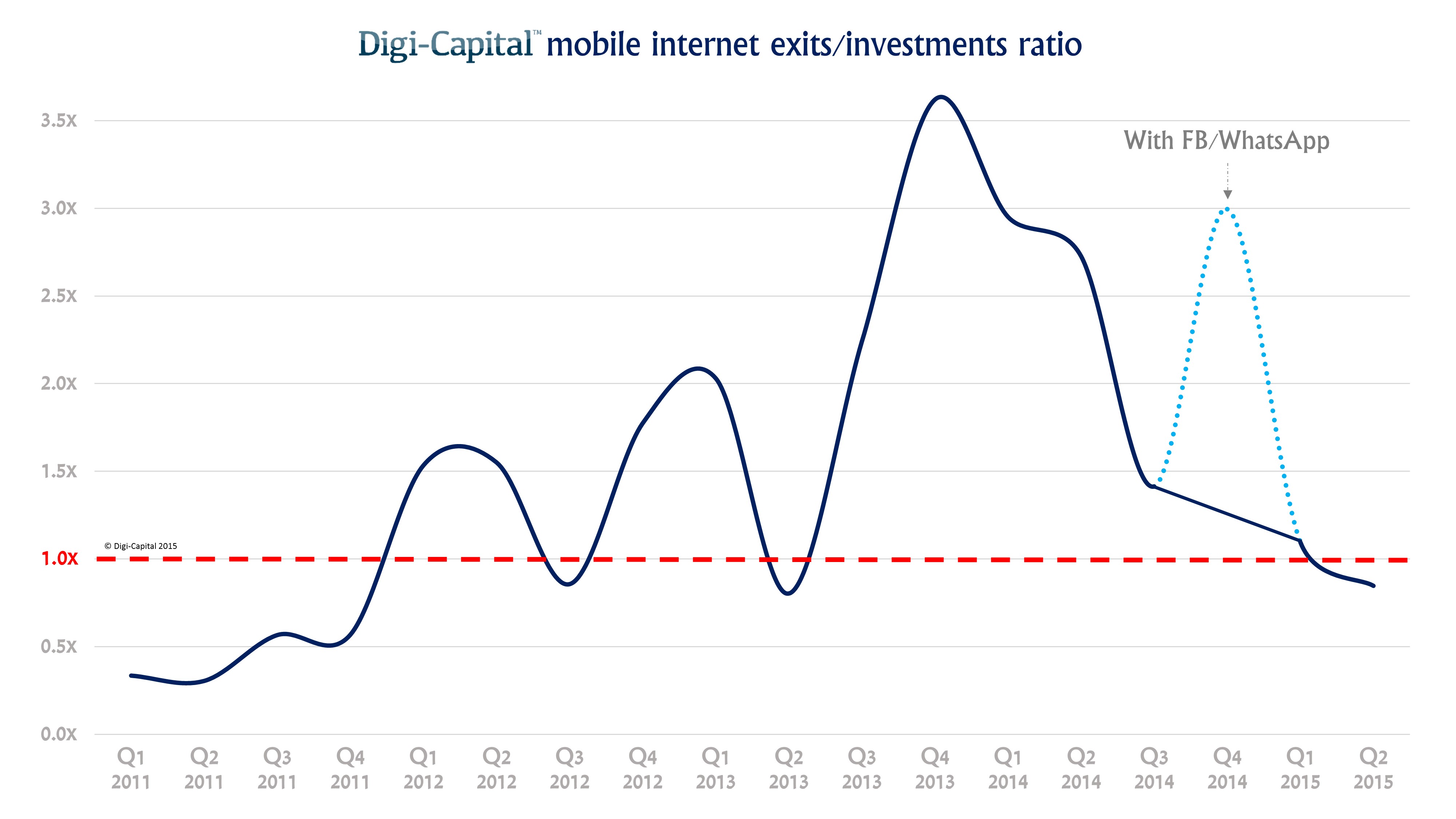 In early stage markets, more money is generally invested than comes back to investors. So, as expected, the ratio of exits (M&A + IPO) to investment for mobile Internet stayed below 1x through 2011. Exits began to heat up in 2012, with investors seeing more than 3.5x the money invested coming back by the end of 2013. The first half of 2014 also saw an almost 3x ratio.

The last four quarters saw the ratio of exits to investments plunge dramatically (note: this excludes the outlier Facebook/WhatsApp deal), falling below 1x in Q2 2015. In other words, less money came back to mobile investors than went in the last quarter. What’s going on? 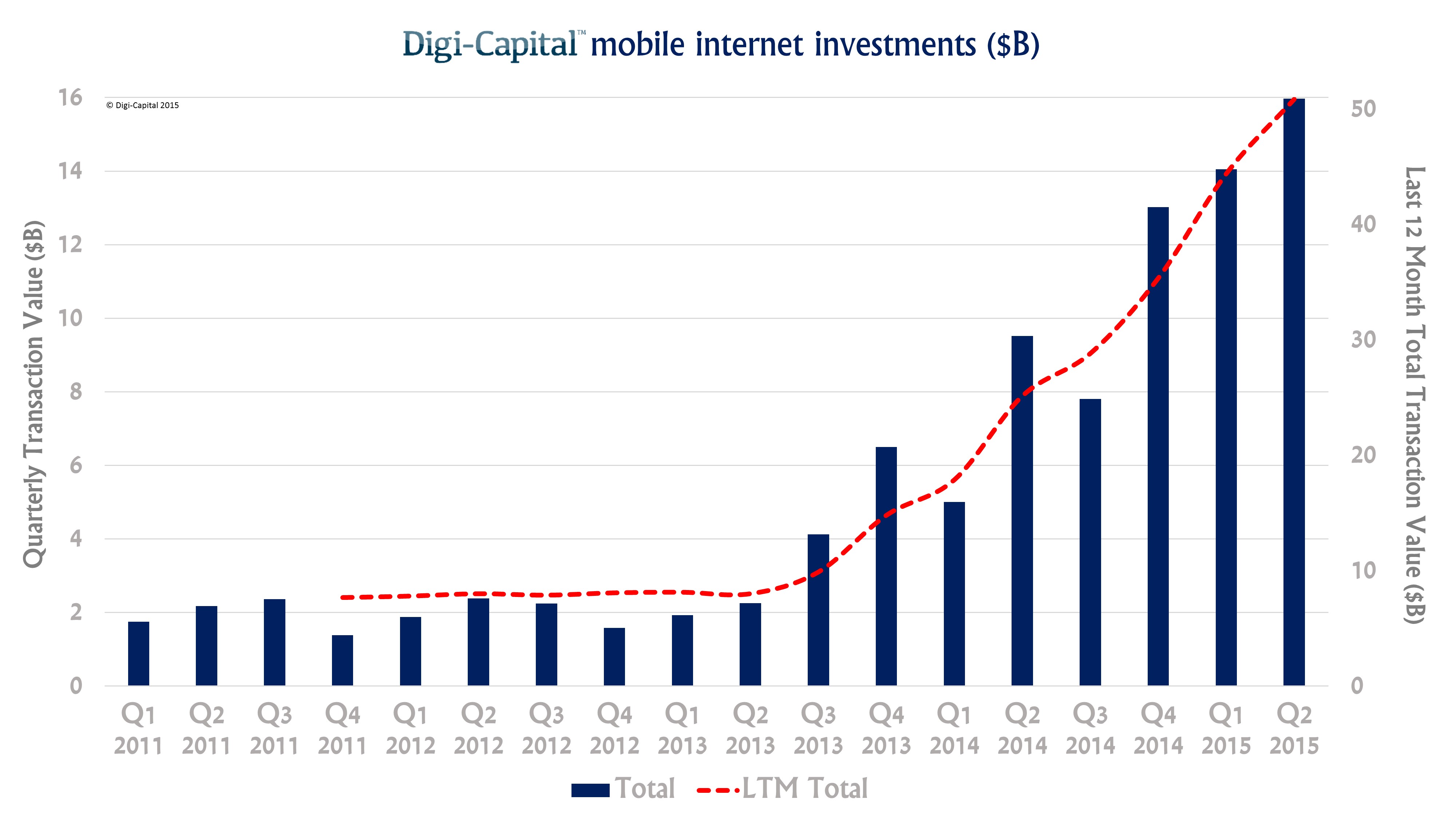 The global financial crisis took its toll, and despite iPhone-led exuberance, it took years before the investment community as a whole really understood mobile. Up to the first half of 2013, mobile Internet investment never got much above $2 billion a quarter, with the smartest risk-loving investors getting in on the ground floor.

Then everything changed, with mobile investments skyrocketing to a record $50 billion invested in the last 12 months. FOMO (Fear of Missing Out) has been a powerful motivator, with deal sizes and valuations going through the roof for the last two years. 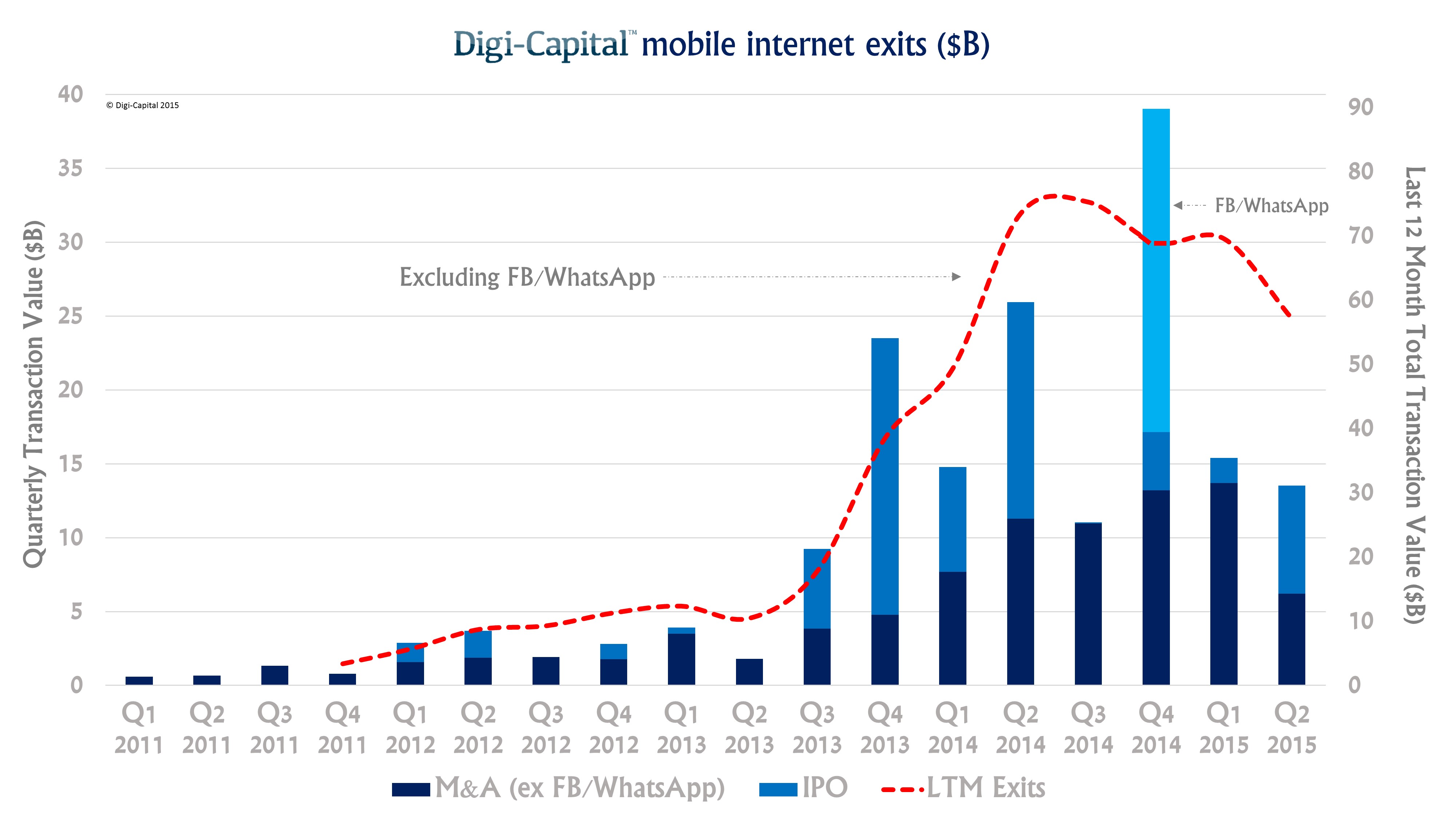 The mobile Internet exit (M&A + IPO) market stayed in the low single-digit billions of dollars per quarter from 2011 to mid-2013. It took off in the second half of 2013, cresting at just over $25 billion by the middle of last year.

But then the market began to turn. Mobile IPOs started to dry up. While mobile M&A continued to grow until Q1 2015, it dropped dramatically in Q2, toward 2013 levels. Combined exits have now fallen steadily (excluding Facebook/WhatsApp) for two straight quarters, and are half what they were at their peak.

“No one remembers who climbed Mount Everest the second time.” — Na Nook 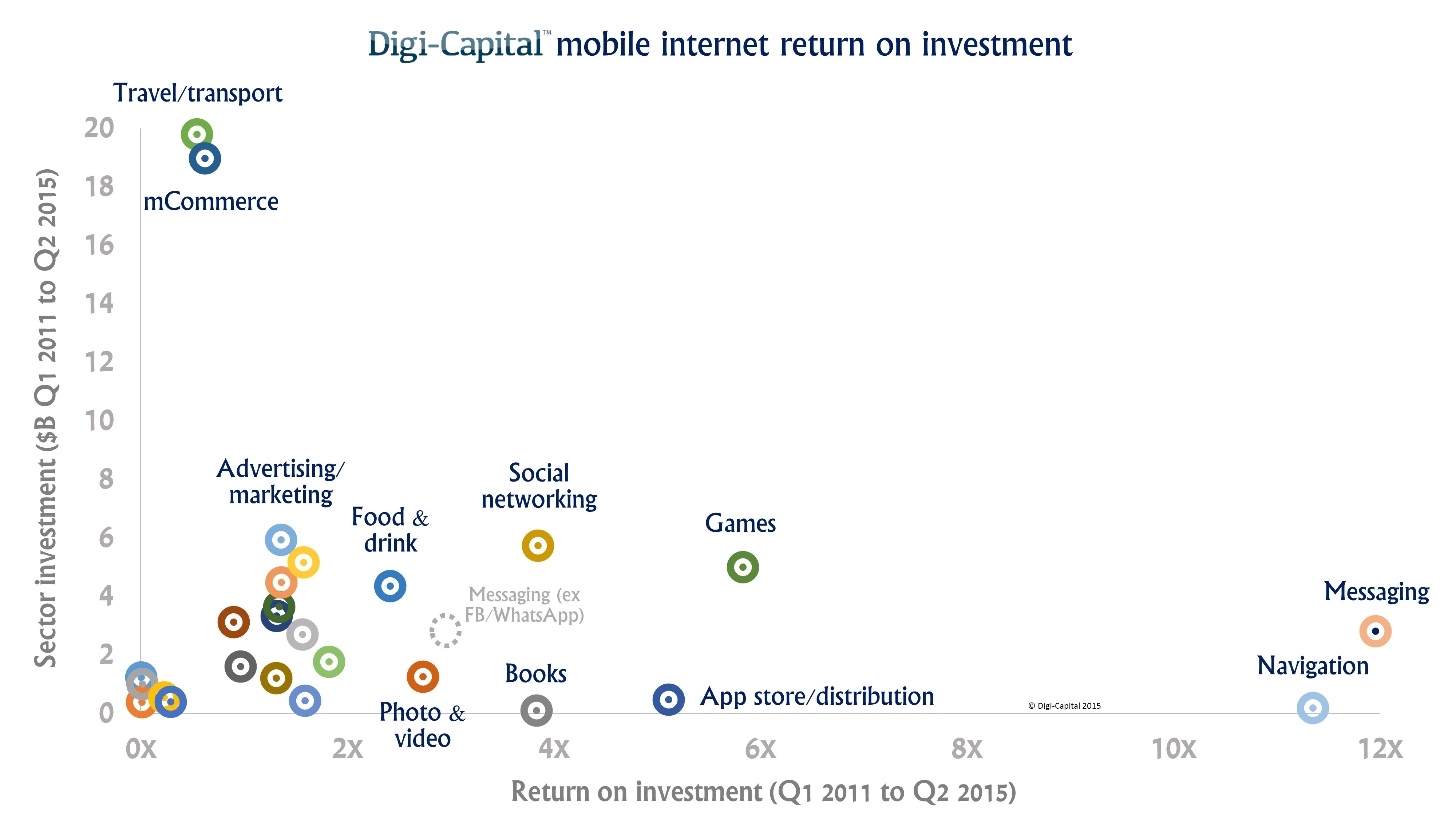 “If you can return 3x on your portfolio before management fees and carry, you can deliver 2.25-2.5x net to your investors and over a ten year period (with an average investment duration of 5 years), that is an acceptable return to the LPs (18-20% IRR).” — Fred Wilson

As well as the 3x ROI Fred describes, let’s consider where the money has been invested and how much of it is locked up. Understanding investment scale (i.e., what’s important) and returns (i.e., what has been valuable) in the 27 sectors that make up mobile Internet shows where investors are happy and where they might be nervous.

Mobile food and drink is in the 2x to 3x ROI range, with $4 billion invested. Then there are 10 sectors whose $40 billion invested returned in the 1x to 2x range since 2011. The largest is mobile advertising/marketing at $6 billion, plus education, entertainment, enterprise/B2B, tech, utilities, wearables, lifestyle, health and fitness and music.

Finally, eight sectors delivered less than 1x ROI, so less money returned to investors than they invested in the last five years. The largest pools of locked up cash are $20 billion in mobile travel/transport and $19 billion in mCommerce, as well as mobile weather, medical, sports, business, productivity and news.

What happens next depends on whether investment continues to accelerate and whether or not the exit market rebounds. While the underlying growth of mobile Internet remains strong (almost 3x revenue growth forecast to $850 billion by 2018), the rest of the year will determine whether investor and consolidator sentiment changes the current direction of the market.

More details are available from Digi-Capital.