As a cloud identity management service, Okta collects tons of data about how its customers use other cloud products. Today it released its first Okta Business @ Work Report. Among the many compelling findings was that Microsoft’s Office 365 was the favorite cloud service overall so far this year.

Okta is not alone in using the data it collects to generate reports. ZenDesk puts out a quarterly report based on customer service data running through its systems. Data is an artifact of simply doing business and these companies are acknowledging and formalizing that notion by sharing the data with customers.

The company found that it was using this type of data to decide where to concentrate its resources, CEO Todd McKinnon told TechCrunch. “We used data to see what apps people were using and the frequency of usage and then made integrations to those [most popular] things the best,” he said.

With 2,500 customers using over 4,000 cloud applications, he said the amount of data was such that it made sense to generate a report and share it. He acknowledges that this is a snapshot of his customer base and may not always correlate with the world at large, but it does present an intriguing picture of how Okta customers are using the cloud.

Okta has been tracking app usage since 2012 and for most of that time, Salesforce.com has held a firm lead in usage statistics, but over the last year Office 365 which has been climbing steadily finally surpassed it with Box coming in third, according to the report. 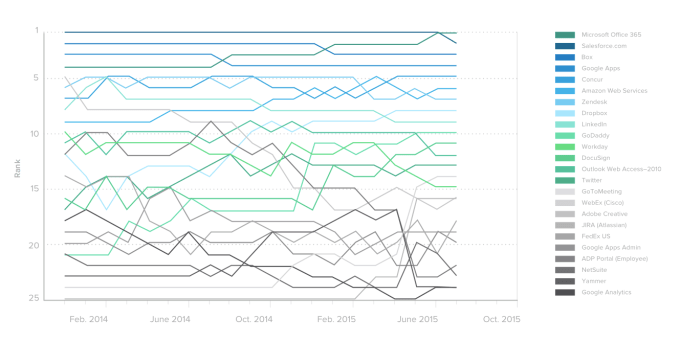 You’ve probably been hearing about Slack, the increasingly popular corporate messaging app. Not surprisingly, it leads app growth over the last quarter with a 50 percent increase. More unexpected, PagerDuty, a tool for managing IT incident information was second with 25.5 percent growth. SurveyMonkey, the online survey service was third at 23.5 percent. 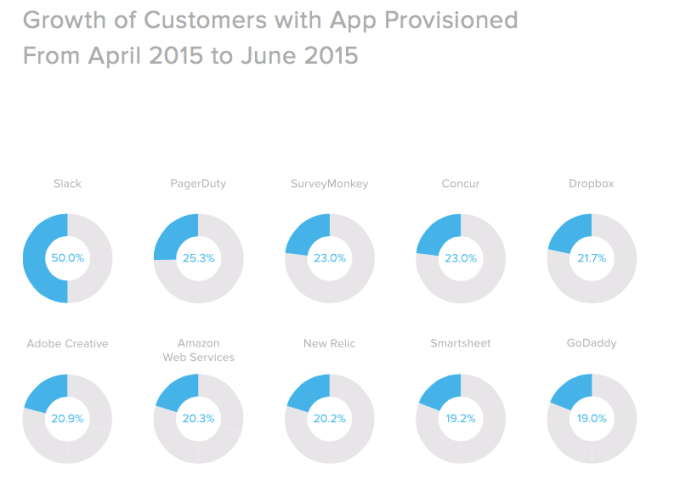 The average number of stand-alone cloud apps in place at Okta customers is between 11 and 16, and this is true across a range of company sizes, the report found. This was a number that ended up surprising McKinnon who expected it to be much lower, he said.

The report even looked at tablet usage and found the top three tablet users by industry were pharma, biotech and education. Meanwhile, education and retail were the top industries when it came percentage of users logging in using a mobile device.

Since Okta is an identity management company, a report from them wouldn’t be complete without some security details and the company found that multi-factor authentication (MFA) has been on the increase with Amazon Web Services, Salesforce.com and Office 365, the top three services when it comes to MFA implementation.

The report was based on anonymized data from 2,500 customers, running 4,000 applications (with thousands of additional custom integrations) with millions of daily authentications from 185 countries.

The report looked at many other details such as popularity of apps by industry, region and other pieces. McKinnon said that he could see a day when they look for a way to charge for this information, but for now, the report is free.