Mesosphere, the company that aims to build a container-centric “operating system for the data center” based on the Apache Mesos project, is giving the first public demo of Mesos running on the preview version of Windows Server 2016 at MesosCon today.

Microsoft only launched the first technical preview of Windows Server with support for Docker containers yesterday, so it’ll likely be a while before developers will be able to use this feature in production.

As Mesosphere co-founder Ben Hindman tells me, the team worked closely with Microsoft to get this to work through the open source Apache Mesos project. He also noted that many of Mesosphere’s enterprise customers have been asking for Windows Server support as they get ready to move from piloting containers to putting them into production.

The reality in many enterprises, after all, is that they run both Linux workloads and Windows Server workloads in their data centers. So with Mesos (and, by extension, Mesosphere), operators will be able to run tasks that need to run on Linux machines on those and Windows workloads on Windows servers using one and the same container management tool. 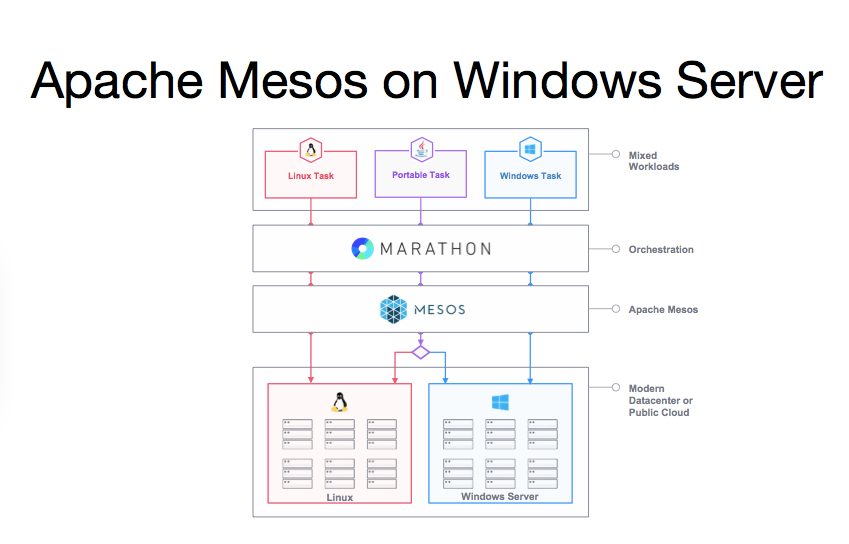 Microsoft Azure CTO Mark Russinovich told me Microsoft participated in this project because the company wants to give its customers access to another container orchestration technology for Windows — and it’s also something its customers have been asking for. The company already demonstrated Mesos running on its Azure cloud, but that was a Linux-based demo.

The Mesosphere team tells me the code that makes all of this possible will be on its GitHub repository in a week or two — though some parts are already up there.

It’s worth noting that there have been some reports lately that Microsoft is actually looking into acquiring Mesosphere. The two companies are definitely very friendly and Microsoft is clearly buying into the container concept, both on its cloud and server platforms.

Over the last few years, Microsoft has also shown that it wants to work with the open source community. The same could be said for Google, too, though, and if Mesosphere is in play, it surely won’t sell without a bidding war.