Google Photos wants to be home to all of your photos (and videos). Whether you have a thumb drive, CD, DVD or undeveloped film laying around, the team wants you to consider uploading them to the service. Why? Because that’s when they can make the “magic” happen.

Right now, Google Photos will wade through all of your treasured visuals and turn them into animations and stories or drop effects on them. You get alerted on the web or through the apps via the Assistant. It’s a nice little notification to get that something has been created with zero effort. 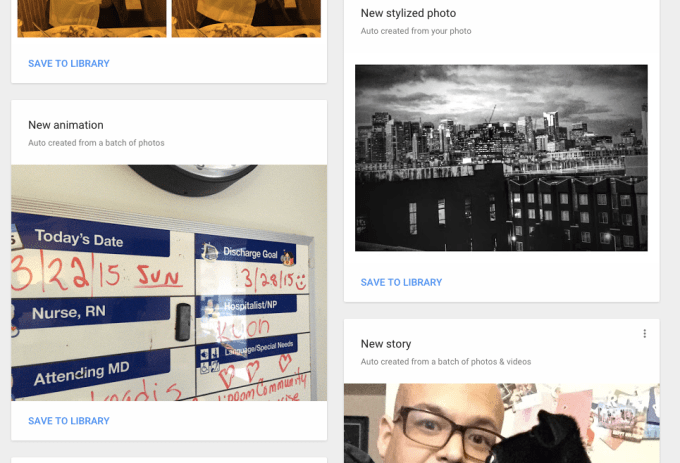 I chatted with the Product Lead for Google Photos Search, Chris Perry, about the latest automatic toy for Photos, “Rediscover This Day.” It does exactly what you think it’d do, brings up photos from say, three years ago, and lets you reminisce about the past (or piss you off…more on that later.) It’s available for the web and both Android and iOS apps.

It’s kind of like Timehop and Facebook’s memories — but not really. It won’t bother you daily unless you had a worthwhile group of photos to show you.

I asked Perry how they can make this interesting without it becoming annoying fast (which Timehop has for me), and he says:

Visual quality of photos are taken into account. No screenshots. We’ll look at photos taken over a longer timespan, something that was more of an “event.” Something that’s going to emotionally resonate. We look at the presence of landmarks. Those get promoted to collages. People is a strong signal that we’ll use to help remind you. 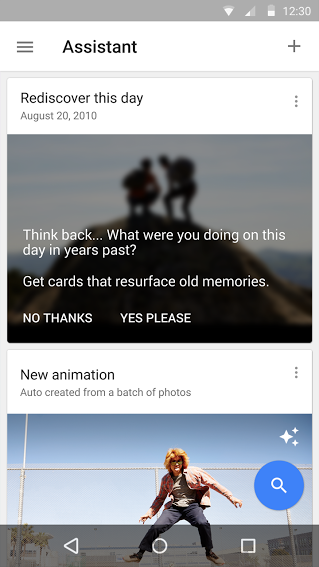 “The biggest reason why I’ve been championing this feature is the amount of joy that I’ve gotten from my groupings.” Chris Perry

So basically, just because a photo was taken a year ago today, Google Photos won’t necessarily bug me about it…as it’s more than likely signaling no previous interesting event. Makes sense. Perry says that this is just the first of this kind of feature, with more on the way. Additionally, you can now manually edit a timestamp on a photo you store on the service to make a feature like this work a little more accurately.

I’ve openly asked in the past, “what are we going to do with all of these photos?” and it’s a question that this product is aiming to answer. Perry explained that this particular feature saw the light of day because it was fun: “The biggest reason why I’ve been championing this feature is the amount of joy that I’ve gotten from my groupings.” 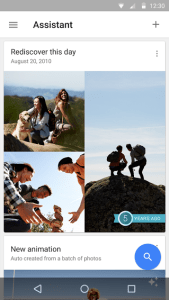 I have over 20K pictures stored on Google Photos and it’s a service I visit once every few weeks, at best. Most of the reason for that is because I forget it exists, and I have to imagine that most of the other people who use the service would say the same.

Dropping little hooks into the product to draw people back is pretty smart, especially when you’ve chose, as Google apparently has, to stop focusing on the social components of Google Photos. Sure, you can share a photo, animation or collection with someone, but it’s not the same as being tagged on Facebook or Instagram, which is retention candy.

Speaking of sharing, Google Photos will now let you push an animation out to Facebook as a GIF and to Instagram and WhatsApp as a video. Again…just social enough to get by.

The rediscover feature doesn’t come without its issues, though, mostly issues that follow Google Photos as it stands today. A cool part of Google Photos search is that you can search via people, places or things. It’s nifty to search for “dog” and then have every photo that has anything resemble a dog come back as a result.

However, sometimes there are certain things, or people, that you’d rather not have come up in search or Google Photos spend time on animating. Say, ex-girlfriends of boyfriends, etc. You get the idea.

Perry tells me that this is something on the team’s mind, but there are currently no features in place that let me exclude something that’s been grouped on Google Photos. That’s a problem with any “memory” feature or service, because you usually don’t know what’ll trigger you until it does. The feature is opt-out, but sadly not customizable.

Nothing’s perfect, right? Anyways, what else am I going to do with all of the photos that I have?