Finding love using online dating apps and services can be tough, and even dangerous for anyone who’s not straight and cisgender (those who don’t identify as transgender). Yes, there are apps for gay men, like Grindr and Scruff, and one for queer women called Her. But what about trans people?

Enter Thurst, a dating app for queer, trans and gender non-conforming people. “Thurst pretty much came out of a frustrated conversation with friends, joking about how horrible OKCupid was, for queer folks in general but especially for women and trans folks,” Thurst Co-Founder Morgen Bromell told me. “We were talking about our various experiences on Tinder and realizing there wasn’t actually a space to exist and feel completely comfortable, and safe to interact with people and try to date at all.”

“Everyone is welcome on Tinder,” a Tinder spokesperson told Business Insider in June. “​Each banned account is individually assessed. If we find that a user has been wrongfully banned, then we unban their account. This includes instances when transgender users are reported by others, but haven’t violated any of our community standards.”

Still, Tinder only offers two options for gender identification: male and female. I’m literally shaking my head as I write this. But Tinder isn’t the only mainstream dating app that’s guilty of excluding trans people. Hinge, another popular dating app, also only offers “woman” and “man” as gender options. I’ve reached out to both Tinder and Hinge about safeguards for trans people using their apps and why they don’t offer other ways for people to express their genders. I’ll update this story if I hear back from Tinder and Hinge.

Of the well-known dating apps, OKCupid is one of the few doing it right. Last year, OKCupid added expanded options for gender to include choices like transgender, gender queer and androgynous. For sexuality, OKCupid added options like queer, asexual and pansexual. But, offering those options was clearly an afterthought, considering that OKCupid has been around since 2004. With Thurst, inclusiveness is at the core of the product, and with that in mind, so is safety. This year, 16 trans women have been murdered, and most of them have been trans women of color. 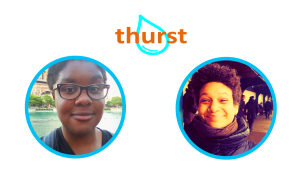 “Our main focus is pretty much security and safety,” said Bromell. “We’re really working on harassment policies to create features that protect users from being tracked or stalked, or being put in a dangerous situation when they meet in person. That goes for trans women of color who get unreal levels of harassment and violence on dating platforms and apps.”

Thurst, which is currently in beta, hopes to launch early next year. A couple of nights ago, Bromell pitched Thurst at TechCrunch’s NYC Meetup and Pitch-Off and ended up winning second place. Bromwell is currently trying to raise a seed round so that Thurst can hire a mobile designer.