Husband-and-wife team Will Sacks and Kati Bicknell launched Kindara in 2012 as a fertility-tracking app that would prompt women to enter signs like basal temperature and cervical fluid measurements to determine when they’re ovulating.

Earlier this year, the company began developing a Bluetooth-connected basal thermometer, Wink, to make the intake process more simple. Slated to ship in December of 2015, Wink is the first in a line of connected hardware products that Kindara plans to roll out.

“The healthcare system is ill-equipped to give women good results about how their bodies work, because it doesn’t really give them any data,” says Kindara founder Will Sacks.

Even when working with a gynecologist, birth control involves a surprising amount of guesswork and experimentation. If you’re looking to prevent pregnancy with the pill, it’s a trial-and-error method to figure out which concoction of hormones gives you the least negative side effects. 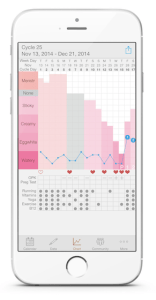 The fertility tracking method, a natural alternative both for prevention and trying to get pregnant, requires careful measurement and logging of temperature and hormone levels on a daily basis.

With Kindara, women are prompted to enter this information, along with diet, exercise, or anything else they suspect might be affecting their cycle through the app’s custom data feature. Over time, the app shows a correlation between these factors and fertility.

Eventually, Kindara will be able to use the data it’s collecting to create a prediction tool that suggests certain behaviors or supplements that affect a woman’s fertility.

Aside from a number of free period trackers that you can find in the App Store, a few venture-backed companies have sprung up lately to tackle fertility with data. Kindara will go up against Glow, the women’s health startup founded by Max Levchin that has raised $23 million to apply data science to fertility.

Sacks reports that of the 750,000 women who have downloaded Kindara to date, 60 percent are trying to get pregnant, while 30 percent are using it to avoid pregnancy.

“Our vision is that eventually, a woman will have a Kindara account from before she gets her first period, through avoiding getting pregnant, through having a baby, and all the way through menopause,” says Sacks. “It will be a lifetime record of her reproductive health.”