“Hey Robot, make me a sandwich,” I yelled over the ruckus of Y Combinator Demo Day’s break room.

Y Combinator is known for software success stories like Dropbox, Stripe and Zenefits. But now it’s evolving to make the “real world” a *better* place, too. Last season’s batch had just 11 hardware starupts. 2014’s classes had just 8 and 9. This season, 20 of the 102 startups build hardware — a far bigger percentage than ever before. The include a weight scale that generates a virtual reality avatar of you that shows where you’re getting fat, and a full-service cafe on a bike. [Check out our “Top Startups From Demo Day 1,” or writeups of all 50.] 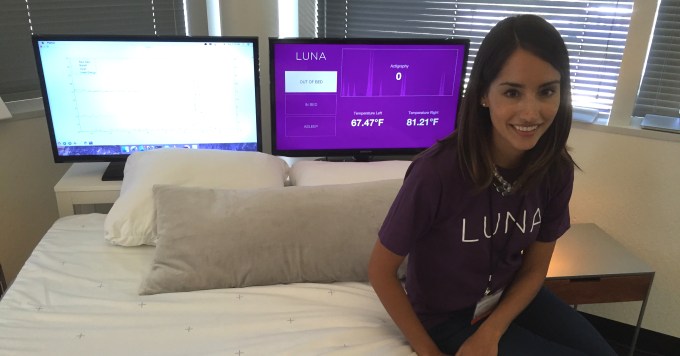 Instead, it’s the production process and market for hardware that has prompted a metamorphosis in the makeup of YC’s batches. “Costs are coming down, and cycle time is coming down,” Altman tells me, referring to how quickly startups can build, test and rebuild. “When that happens in a new area, you get more startups.” Altman gave hardware, enterprise software, and biotech as the current examples that have now “become addressable by startups.”

New opportunities to raise early prototyping capital through pre-orders have also catalyzed Y Combinator’s progression. “Largely, it goes back to crowdfunding,” YC partner Garry Tan tells me. The rise of Kickstarter and Indiegogo have allowed startups to prove demand and avoid taking too much expensive early stage capital.

“No one wanted to put money into hardware” Tan says. “But now these startups do crowdfunding and show investors, ‘Yeah, there’s a market.'” If these startups can dream up affordable gadgets everyone wants, or expensive equipment lots of businesses need, they could find the big exits that pay back YC’s investments.

Previously, purchasing a new product online without touching it, or at least seeing the final version first, seemed scary to most people. But now, “customers are getting more used to buying from startups,” says Luna co-founder Alexandra Zatarain. Her company has already sold over $1.4 million worth of its smart mattress covers that let you control temperature and track your sleep data. 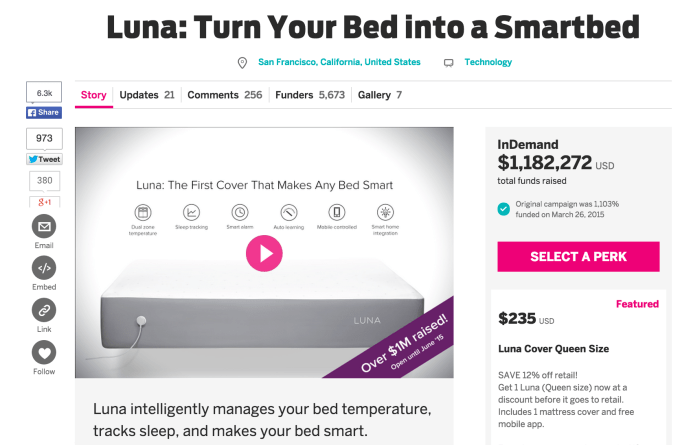 Luna sold $1.2 million-worth of its smart mattress covers on Indiegogo

But what can YC offer hardware startups? A few years ago, its batches were full of social apps, consumer marketplaces, and efficient enterprise software. YC built up its team of partners, mentors and advisers with those kinds of companies in mind.

To adapt, this month YC hired Luke Iseman, a veteran hardware entrepreneur and former CTO of Soil IQ/Edyn, which made an Internet-connected soil sensor for farmers. Iseman oversees the new wave of YC startups building physical products. He’s showing them how to turn a vision into a real business. 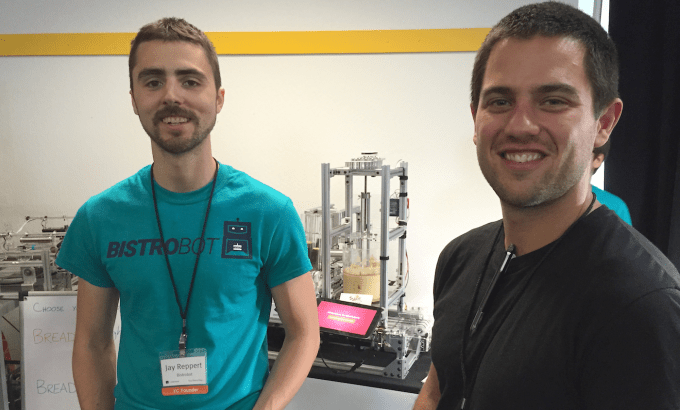 “YC teaches you to get out into the world and test it,” says Jay Reppert, co-founder of BistroBot, a customizable sandwich-making robot.

There are also more tangible resources. Altman explains that “Luke has arranged 100 or so partnerships. We get volume pricing on all the hardware stuff.” Iseman himself tells me “I know three different places for startups to get a circuit board populated in a week.”

Furnishing a machine shop necessary to prototype hardware products can be too expensive for startups. Luckily, Reppert tells me “The best thing about YC is they provide us access to Pier 9, a multi-million dollar machine shop in San Francisco. Things that would have cost a lot of money to have done, we can do ourselves.” 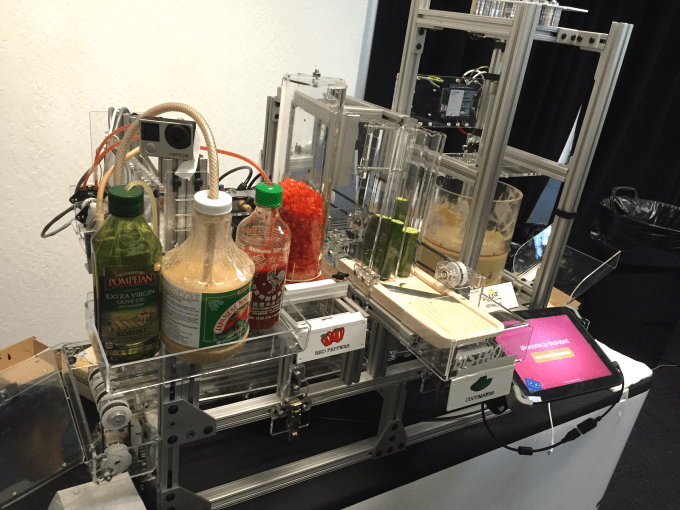 The BistroBot sandwich robot that made my lunch

Still, one of the biggest draws of Y Combinator is the same for software startups as it is for hardware tinkerers: the vast alumni network. Companies that get into YC can learn from the mistakes and insights of the companies from past batches.

For example, if a hardware startup needs to find a reliable Chinese manufacturer, they can rely on the research and trial-and-error of their predecessors. There are several hardware startups that have found success upon graduating from Y Combinator, including early smartwatch maker Pebble, and electric skateboard developer Boosted Boards.

Yet as the alumni count has grown, knowledge sharing has gotten more difficult. Tan says the problem was that “if you ask a very granular thing, it gets annoying” because that question is visible to all the alumni.

That’s why Tan is working on developing categorized sub-threads on the giant Y Combinator alumni forum. This way, a query only goes to experts in the appropriate field. 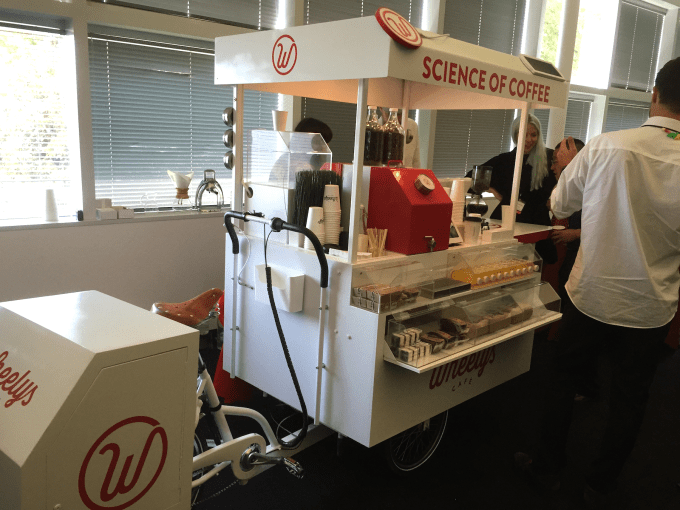 At least one of the new YC hardware startups (which I won’t name) believes the accelerator is still better for software companies. “YC isn’t as strong with the hardware advice and technical stuff,” the founders told me. YC has a partnership with hardware accelerator Bolt, but these founders said “it’s not strong enough,” because they only got to meet with Bolt’s advisers once a month.

The founders did note that YC’s alumni, including Coin and Thalmic, can help when its full-time and part-time partners can’t. “You can email their founders and expect a good response within a few hours.”

Whether YC had the chops to propel hardware startups “was honestly one of our largest questions coming in,” says Philip Winter, co-founder of hyped smart shower startup Nebia. But they were assured the accelerator was committed to jumping into hardware when Altman jumped into the Nebia shower five minutes into their admission interview. Winter laughs, telling me they only had a hand towel for the head of the world’s most prestigious startup school to dry himself. 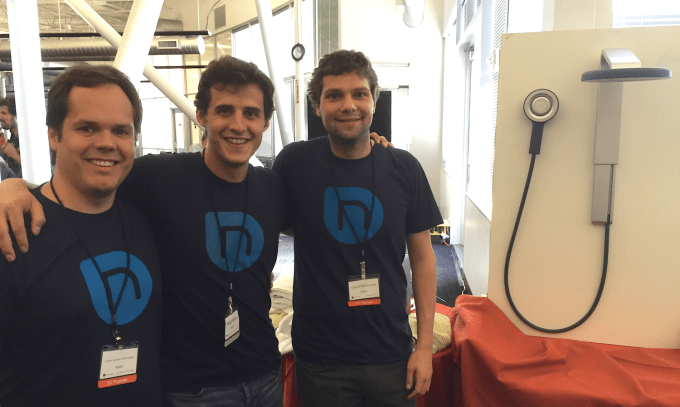 The founders of Nebia next to their next-generation shower head

Now the question is whether the investors who come to Demo Day are ready to make the shift towards hardware as well. One VC who asked not to be named told me his fund has to actively resist the temptation to invest in things they don’t understand so well, including hardware. 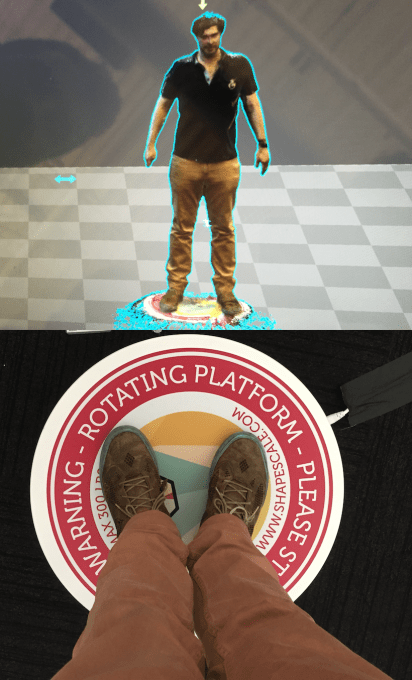 “We try as hard as we can to focus on our core, though we have made some exceptions to that rule.” For example, if the startup has won the trust of other smart people…by being admitted to Y Combinator. That’s a very good sign. Regarding YC’s ability to choose high potential hardware startups, not just silly toys, investor Semil Shah of Haystack says  “They’ve gotten very good at it.”

Altman admits the VCs like the hardware startups better when “there’s a software angle they can understand.” Yet Iseman bluntly told me “I don’t buy this idea that there are category investors. Investors are after returns. Hardware and software growth curves are indistinguishable.” The VCs just need to be convinced, and hardware might have an advantage there. “You can stick your hand in the Nebia shower. That’s compelling!” Iseman beams.

Software is where the last era of entrepreneurs focused because of how nimble it is. They can quickly scrap ideas and rebuild, experiment and iterate. But with crowdfunding, lean startup principles and the YC alumni network, the same can be done with atoms, not just bits.