AlienVault, a company that delivers a hybrid threat management solutions combined with a crowd-sourced threat intelligence platform, announced a $52 million investment round today.

The company boasts 24,000 registered users with 2,200 paying customers and has been adding 300-400 customers every quarter. Investors liked the growth trajectory and decided to pursue a round, company CEO Barmak Meftah told TechCrunch

What’s more, AlienVault is beginning to attain the size and scale that a company reaches just prior to an exit, Meftah said. He wouldn’t commit to an IPO or any specific date of course, but the money will help lay the groundwork for it down the road.

“We are scratching the surface of how big we can be. An IPO exit is something we aspire to,” he said.

The company actually hired an experienced Chief Financial Officer recently when it brought Brian Robins, former Verisign executive VP and chief financial officer on board. This type of move often precedes an IPO as a startup begins to shore up its financial systems.

The company actually wasn’t looking for the money — and still has money in the bank from previous funding rounds — but when investors came knocking with favorable terms, it was an offer Meftah couldn’t refuse.

The company has a couple of key products: Unified Security Management (USM) and The Open Threat Exchange threat sharing platform. The latter is free and doesn’t require you to be an AlienVault  customer, but  much like with open source, becoming a customer offers several key advantages including integration with the USM threat management dashboard. 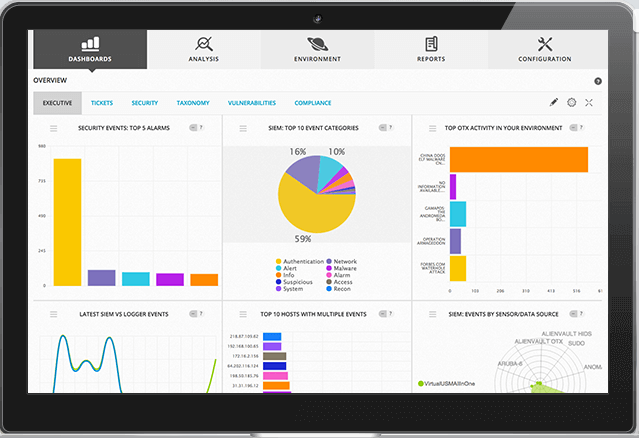 Meftah says even though it created The Threat Exchange with the idea of being good security citizens, the fact that it often acts as a business feeder is a nice benefit.

The USM has been designed to help small to medium sized business (SMBs) manage threat security. Large companies have the resources to protect themselves, but AlienVault is looking at the lower end of the market that traditionally has not invested heavily in this type of protection because it’s been too expensive.

As any company in expansion mode, AlienVault has been adding employees. It has 201 at present, and is hiring aggressively, particularly in sales. “We can’t hire enough sales reps,” Meftah said.

The company’s revenue streams are divided into two areas. First, it has the threat appliances, which it sells as hardware, virtual machines and as a cloud service. It can make additional revenue on support and subscriptions to threat intelligence information.

The other part comes from channel partnerships with managed security service providers, who wrap the AlienVault products into a service and sell it to their customers. So far Meftah says the arrangement has worked out quite well and now accounts for 20-25 percent of the company’s business.

Meftah doesn’t intend to go crazy with the new funds. “The trend in Silicon Valley is to burn through cash. We want to keep an eye on our burn so all of financial parameters look attractive,” he said.