Drones are the future of photo journalism, but the problem is you usually need a dedicated pilot. Unless you have a Fotokite. It’s a quadcopter on a retractible dog leash. Strap a GoPro to it, and it automatically records whatever you’re doing at the end of its tether while automatically hovering between 1 ft and 26 ft away.

Today, the first consumer Fotokite model called Phi starts pre-orders on Indiegogo for $349 (GoPro not included), and it will ship in early 2016. The Fotokite Pro model is already in use by newsrooms like the BBC.

The Fotokite Phi could unlock citizen drone journalism in crowded areas like protests where it’d be too dangerous or distracting to fly a free-roaming drone. Its low-torque soft plastic blades with guards reduce the chance of injury if it does hit someone, winning permission for Fotokites to be flown near crowds in Switzerland and France. Plus, the whole drone folds into a foot-long tube that can easily be carried in a backpack. 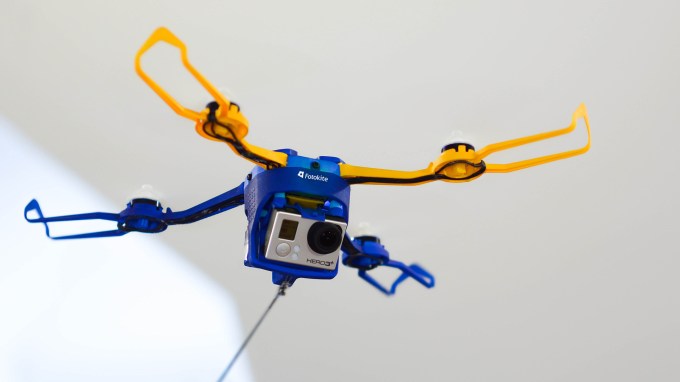 Lupashin was inspired to build the Fotokite after massive protests of 2011’s Russian Federal Election irregularities almost went unseen. Luckily, a couple of drone photographers that typically shot landmarks were there, and they captured the true magnitude of citizen unrest. He knew drone journalism would be important, but few reporters had the skills to fly a drone at all, let alone amongst the bustle surrounding world news events.

His solution was a leash. Using the same circular handled, retractable, self-coiling leash people use for dogs, Lupashin realized he could eliminate the need for a drone’s pilot. All the drone has to do is hover while maintaining tension on the leash. By tethering the unmanned aerial vehicle right under the slot where you can attach a GoPro, the camera stays pointed at the owner.

Here’s a video of the Fotokite Phi in action:

I’ve crashed most of the drones I’ve tried to fly, but the Fotokite Phi was easy to keep aloft. You just pull its folded body out of the tube, turn it on, and give your wrist a quick twist. That gesture starts the propellers, and you simply let it go. Once it’s flying nearby, you can give the leash more slack to get a wider field of vision for its camera. I ran around an indoor office dragging the Fotokite through the air without crashing.

If you do need to reposition the drone camera or point it at someone else, the leash handle includes button that nudge the Fotokite higher or lower, and spin it left or right. Those were a bit harder to handle, leading me to accidentally get it turned around. But flying was still nowhere near as difficult as with a traditional two-joystick drone controller.

Once your done, you just reel the Fotokite in by repeatedly reaching out to absorb slack, then locking the leash and pulling it towards you. Then you can swiftly fold the drone up and be on your way. It makes you a one-person video crew.

The main difference between the Fotokite Phi and Pro is that the consumer Phi model will only fly about 15 minutes on a charge, and its recording capabilities are only as good as the GoPro you plug in. The Pro’s leash is actually a power cable and an uncompressed HD video downlink, so it can fly and record indefinitely.

Fotokite’s most direct competitor might be selfie drone Lily, which is free-flying and relies on location and machine vision auto-avoidance to stay aloft and focused on its owner. The Lily would certainly work better for action sports and high-altitude photography, but might be too erratic and solid to fly anywhere near crowds…

…Not that you should necessarily be doing that even with the Fotokite. Crashing into people or property won’t win you any friends, and could lead to legal trouble. But if history is being made all around you, a tethered drone could help you tell that story.