The company is billing itself as a more private money-transfer service that’ll beat companies like Venmo to the market in Southeast Asia. Users can transfer money within private groups, as well as chat, but it’s not about making those transactions public, co-founder Moses Lo said. Since starting the beta a few months ago, the company has 13,000 people using the service.

Users load money onto Xendit and they can send and request money from friends in the service or through phone numbers. The company not only has to work with Indonesian banks, but also ATM networks, Lo said. The company is part of this year’s summer Y Combinator batch. The incubator is the only institutional investor in the company. 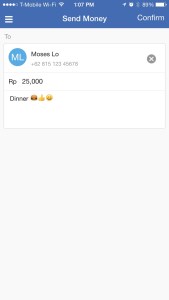 “In Southeast Asia, it’s the perfect storm,” Lo said. “One is a huge population with technology, two is nascent financial services, and third is it’s one of the most viral regions. In Indonesia, there’s [greater than 100 percent] penetration for phones. These people don’t have a bank account, penetration credit card is 3 percent, but there’s a huge population with technology.”

Given the similarities to a service like Venmo, There’s plenty of competition, to be sure. There’s a huge list of other money-transfer service startups. Services like WeChat could throw their resources behind a competing product. Telecom companies may get their act together and build a competitor that could easily overtake a company like Xendit. And new financial services startups are constantly popping up that could also beat out Xendit through a combination of moving faster or building a better service.

There’s the looming giant PayPal, though Venmo and PayPal do not offer peer-to-peer payments in Indonesia yet. With respect to Venmo, a PayPal representative said the company did not have anything to share around global expansion at this time. And then there’s the cash economy, one of the company’s largest competing forces, Lo said.

“We have to convince people in a cash culture that we’re more seamless,” he said. “Through the market share, cash is still the biggest, and we need to change that.”

Xendit holds money on behalf of the user, and then works with banks to wire money. “It’s a normal banking relationship,” Lo said, but in the future the company wants to have deeper integrations and core banking services. “For now we’re doing payments pretty normally; we’re just doing it in an automated, fast, seamless fashion.”

Many sales in Southeast Asia happen through services like WhatsApp. For example, a merchant may sell something by posting an image to Instagram, which will then turn into a WhatsApp conversation, which then turns into a transfer of money for the purchase, Lo said. Xendit, he said, is geared toward making that more seamless.

“Indonesia is so big, that’s where [we figured] we’d start and want to win.” Lo said. “The vision is Southeast Asia, the Philippines, Thailand, those with similar profiles among other Asiatic countries.”

For now, the service is free. And in terms of building a business, “it depends on what consumers want it to be,” Lo said. The hypothesis, he said, is starting off with payments and then moving into financing.