Thanks to Apple updating Boot Camp, that is. If you have had a hankering to try out Microsoft’s latest operating system — and I can recommend at least taking it for a spin — now’s the time.

Apple’s full directions here are worth your time, but the broad strokes are simple: If you have a Mac no older than ‘mid 2012,’ and are running the most recent build of OS X, you should be able to get Windows 10 running without too much bother.

Boot Camp will also let you upgrade from Windows 7 or Windows 8.1 if you have a prior build running on your machine at the moment. If you don’t have Windows installed already, you will probably have to buy yourself a copy of the code. Microsoft is providing a year of free upgrades, after all, not a free ride for everyone.

TechCrunch’s initial impressions of the first, “final” Windows 10 build remains: Lots of promise, more polish than Windows 8 or Windows 8.1, and a return to desktop preeminence. That and it’s still a bit buggy.

Here’s the full list of compatible Macs, via Apple: 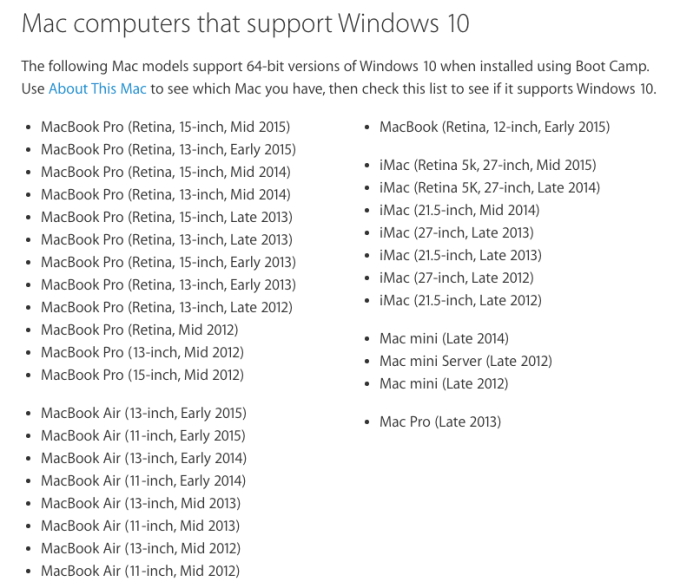 Microsoft likely doesn’t mind Apple making it easier for Mac users to run Windows 10 — after all, it has to reach that billion device threshold. I doubt the software firm cares much about what device is running Windows 10, provided that it is in fact running the code.

It’s Friday, so if you were going to play around at your desk and call it work, you now have a prime excuse. Good luck.