At the event, OneLogin Platform Engineer Isis Wenger (pictured above) received a certificate of honor from the San Francisco Board of Supervisors for battling sexism and racism through the #ILookLikeAnEngineer hashtag.

The panelists talked about being diverse individuals in the tech industry, the power of the #ILookLikeAnEngineer hashtag, and what needs to happen in order for tech to be a truly diverse industry. Here are some of the most powerful quotes from the night:

“This ecosystem can make you feel unwelcome,” Sutton said. “Like you’re not valued as a human being.”

“There are very few industries where you can change the world,” Miley said. “This is one of them.”

“Think of people as people first,” Baker said. They can be anything… have any interest. Break those preconceived notions.” 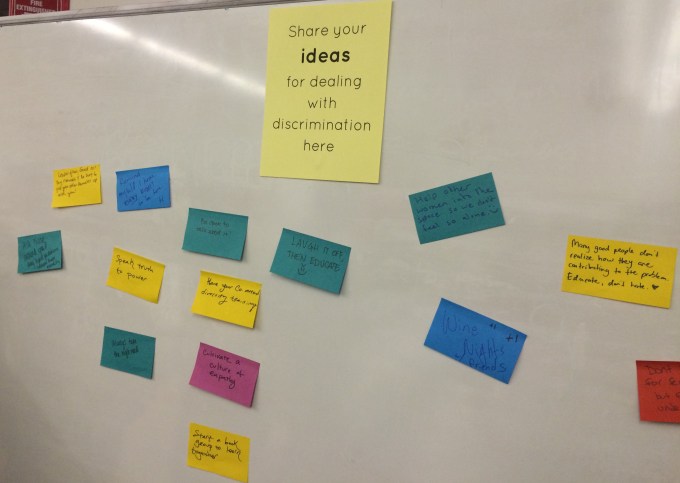 There was also a space for people to share their advice for dealing with discrimination, as well as space to talk about both positive and negative experiences in tech. Regarding discrimination, people wrote things like, “Have your co. attend diversity trainings,” “Help other women into the space so we don’t feel so alone” and, “Remind myself I have EVERY RIGHT to be here.”

Ultimately, the culture at existing startups needs to change, and big and small companies alike need to implement sensitivity and unconscious bias trainings for employees. At the same time, diverse people in tech need to support each other.

Other than connecting the #ILookLikeAnEngineer supporters in real life, the event aimed to raise more money for the billboard campaign. The #ILookLikeAnEngineer billboard campaign initially aimed to raise $3,500 on Indiegogo, but has since increased the amount to $35,000 because the organizers underestimated how much creating a billboard actually costs, the event organizer, Michelle Glauser of Zana, said at the event last night.

Moving forward, Wenger urged the audience last night to ask themselves three questions. In fact, they are questions every single one of us in tech should ask ourselves:

I left the event feeling energized and inspired. That being said, it’s disheartening to know that the people who really needed to hear those stories, like straight, white men, were very few and far between at the event.