A few points, dear reader, to get ourselves acclimated:

That’s how Windows 10 wins, and grows the Windows franchise for Microsoft.

Windows 10 loses in the precise opposite way: Low adoption leads to limited downloads for extant developers, scaring off new developers. A lack of apps cuts at the Windows 10 experience, leading to limited adoption; this discourages developers, creating a negative feedback loop.

We’ve known that for so long, actually stating it out loud seems like shouting the obvious. However, the primer is useful as it underscores the new question we have to ask: Not how well Windows 10 will do, but, instead, how well is it doing?

Let’s examine the data points that we have from consumer, and enterprise perspectives. Consumer first:

Microsoft has promised one billion Windows 10 devices in the market in the next two or three years. This is a deliberately vague promise that comes with wide latitude for Microsoft — it doesn’t have to sell one billion licenses. It just has to get a billion devices running the damn thing; I hope that underscores why Windows 10 is a free upgrade (for consumers).

Now, we have a few data points to examine. You’ll quickly note that we are working with partial data that isn’t entirely clear, and comes from either sources that are sometimes too official, and sometimes not official enough. Such is life. We must struggle on this developer coil.

How many ways can you interpret the number 14 million? A huge number of ways. Here’s Microsoft’s formal verbiage on the figure it announced at Windows 10 had been in the market for 24 hours:

As we’ve shared, our top priority has been ensuring that everyone has a great upgrade experience, so, we are carefully rolling out Windows 10 in phases, delivering Windows 10 first to our Windows Insiders. While we now have more than 14 million devices running Windows 10, we still have many more upgrades to go before we catch up to each of you that reserved your upgrade.

That number is very hard to pin down — how many of those devices came from the more than five million Windows 10 testers? I know that I put Windows 10 on several devices in the run-up to its release. So the 14 million number only gives us a data point with little trend data around it. Consider a first pin in the larger cork.

Following the Official Microsoft Number, Neowin’s Brad Sams wrote, citing internal sources, pegged the number of Windows 10 machines in the market at 18.5 million. That figure, Sams noted, was in contrast to a much higher figure that was bouncing around the Nets for a short shake.

Sams did it again, four days later, reporting that the number of Windows 10 machines had risen to 25 million, and, that, according to Sams, the tally on that day “may [have been] as high as 27 million.”

So, that takes us from 14 million to 18.5 million to 25 million, and maybe to 27 million, as of Friday. Add in the weekend, and the prior pace, it seems mostly safe to peg Windows 10 machines in the market at around 30 million. Microsoft could cross the 50 million mark this month, if I let myself get over my prediction skis just a bit.

There are two other places we can quickly look to get a grip on Windows 10 adoption: Search traffic, and gamer interest. To begin, here’s the Google Trends chart for Windows 10, compared to Windows 8, 8.1, and Windows 7: 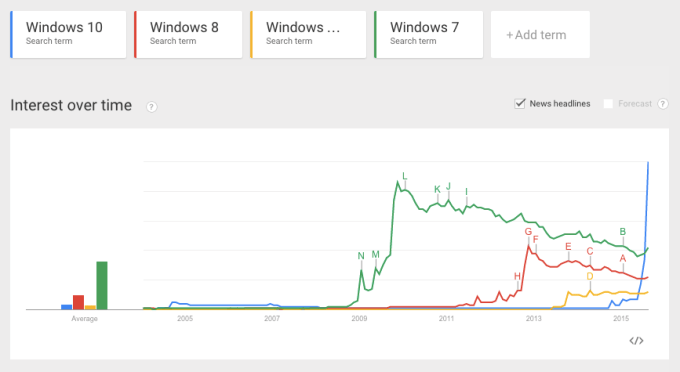 This may be the chart I find the most interesting at the moment. That Windows 10 is attracting more attention than the two versions of Windows 8 (red and yellow lines) doesn’t surprise. That it has managed to not only best Windows 7 in current interest, and historical search volume is more interesting. This is a bullish indicator for Windows 10.

Now, to the gamers. According to Steam’s excellent operating system statistics:

So, Windows 10 managed to pick up 1.2 percent across its two versions. However, that data is dated — Steam releases a new set of information every month. So, the above is July data. Windows 10 launched on July 29th, which, you will note, is quite close to the end of the month. So, given the timeframe, the boost in usage doesn’t feel weak. However, Steam data will be far, far more useful when the month turns over.

Sams’ reporting of a steadily increasing number of devices, coupled with interest from average consumers, and gamer buy-in imply that Windows 10 is at least not having too weak of a launch. That sounds like a cautious comment because it is; downloads could slow, and Windows could stall. For now, however, things seem, among the hoi polloi, to be skating along well so far. One would have to assume, however that Microsoft is merely converting the converted.

The bigger test will be how much this increases over time.

For the enterprise, the easy answer is that it’s too early to say. Microsoft reports that deployment won’t even start until the second half of the year, but a lot is riding on the enterprise side of the equation for Microsoft.

If the company is hoping that virtuous development cycle where companies buy Windows 10, develop for Windows 10 and then buy various Windows devices including Windows tablets and mobile phones works on the consumer side, the stakes are even higher in the enterprise.

That’s why it’s surprising that Microsoft isn’t carrying out its free approach inside the enterprise too. It’s going to sell its share of consumer PCs, but the enterprise tends to move more slowly where there are still organizations running Windows XP.

If it wanted to give business a big incentive to move to Windows 10 faster, certainly making it free would have been a good way to grease the skids. That they have chosen to forgo that approach, could mean that if historical precedent holds, it could be years before the vast majority of companies running Windows upgrade to this version.

But it doesn’t necessarily have to play out that way.

One point in Windows 10’s favor is the growing popularity of Office 365, suggests R Ray Wang, the founder at Constellation Research. He believes cloud adoption could drive increased usage of Windows 10. “Cloud adoption is moving faster than before and because of the shift every device [will be] adopting  [Windows 10] faster,” he said. If he’s right, that means the upgrade cycle could be much faster than we’ve seen in the past.

Which brings us to the whole issue of developers and how Microsoft will lure them to Windows 10 because this is the glue that will hold the whole strategy together. If this falls apart, it won’t bode well for the Windows franchise long term.

Al Hilwa, an analyst with IDC says it’s not a tools problem because he believes Microsoft has good tools in place. It’s just a matter of luring developers who have moved away from Microsoft’s development ecosystem to come back. Making some of those tools available as open source was a good place to start.

“Microsoft’s move here illustrates that the only serious way to engage developers today is with open source. The Visual Studio team is clearly one of the lead groups at Microsoft in transforming how the giant works with open source,” he said.

Microsoft recognizes it can no longer afford to charge developers tools they get for free or low cost from competitor vendors. It needs to get developers generating Windows 10 code and if they are able to do that, it will begin to make smartphones running Windows 10 more attractive to end users due to the single development approach. If that happens, it’s golden for Microsoft, but we are still too early to make any definitive predictions about how that will play out.

Here’s what we do know: Once upon a time, Microsoft released detailed information about the performance of its Windows app store to developers; I helped ruin that parade by publishing the numbers until Microsoft shut down the whole thing. Sorry.

But some data points can be useful: The Windows Store was doing 1.7 million daily downloads in October of 2013. By February of 2014, that number was 4 million per day. And, in late December of 2014, Microsoft said that it had grown downloads 110 percent on a year-over-year basis. That’s what we know from the past.

Presumably, the Windows Store has continued to grow its download pace as Windows 8.x expanded its footprint. From those above numbers, we’ll be able to gauge whatever the company puts out in terms of its historical figures.

To close, we now know the following: Consumer interest in Windows 10 appears high, a good sign Enterprise adoption is simply too nascent to gauge, but could be driven by cloud usage, and we have established a set of historical download figures to properly contextualize any forthcoming developer numbers from Microsoft.

Now we can just sit back, wait, and see what happens.