Tired of making (or watching) the same old PowerPoint presentations? An Australian startup called Zeetings gives you new tools to interact with your audience and track their engagement.

“Despite the fact that we’ve got completely new capabilities in our hands in terms of technology, presentations haven’t really changed,” said Zeetings co-founder and CEO Robert Kawalsky. “We’re stuck with this one-way paradigm, where someone stands in front of a room and talks at a group of people.”

Naturally, Kawalsky created a “zeeting” to show off his approach. To start things off, he ran through the usual set of slides outlining the vision, but then he mixed things up by asking me to participate in polls, and by starting group and one-on-one chats. There was also a section where I could take my own notes. Then, at the end of the presentation, I was asked to give the zeeting a rating between one and five stars.

This sounds fun, but does it really make a big difference? Kawalsky said the Zeetings team has been asking itself something similar: “Are [these features] a novelty, or do they fundamentally change the presentation?” 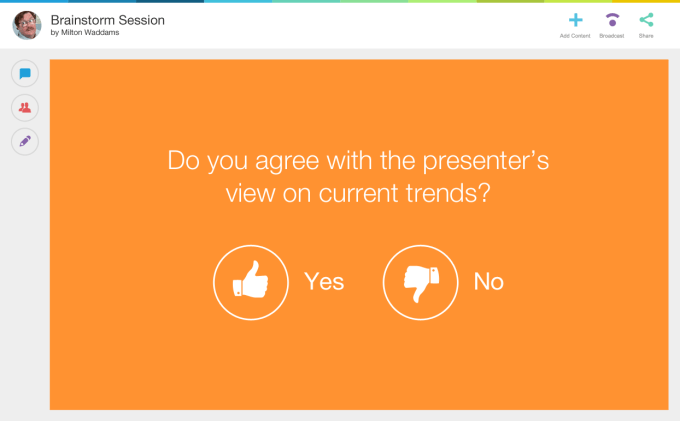 Not surprisingly, he argued that it’s a fundamental change — yes, you can use Zeetings “in the superficial way,” but the early beta customers have found more meaningful uses, like polling attendees at the beginning and end of a presentation to see if their minds have been changed, or using anonymous polling to get more honest answers around sensitive issues like mental health.

Kawalsky also said that interactivity is important because you’re usually fighting for an audience’s attention: “If you don’t engage people quickly, they’ll revert to checking their emails on their phones.”

Plus, by tracking engagement (the metrics include copies requested, meetings requested, votes cast and the aforementioned star rating), presenters can create a “virtuous cycle,” where the data gives them a better sense of how to engage their audience, allowing them to improve their presentations, which in turn helps them collect more data.

Zeetings can be conducted remotely or in-person, Kawalsky said. Beta users included Deloitte, eBay and HP. Here’s a sample zeeting created around a discussion with Irene Au from Khosla Ventures.

Kawalsky also emphasized that this isn’t meant to replace presentation tools like PowerPoint. Instead, it adds the interactivity to existing presentation formats; many users still build their presentations in PowerPoint, then upload and share them on Zeetings.