The Internetogencia was all in a tizzy this week as it commented on a cover photo from Time magazine extolling the simple joys of VR. The cover, if you haven’t seen it, features the disheveled founder of Oculus Rift, Palmer Luckey, who looked like a jolly baby as he bumbled around a virtual seashore. In short, it was WhiteGuysWearin’OculusRifts on the cover of a major news magazine that you probably thought had already gone out of business. Funny stuff, right?

But I’m afraid. I’m afraid that Luckey is a harbinger of something more. While Google Glass – an AR device, not a VR device – was rightly ridiculed for being annoying rather than immersive, VR devices like the one Luckey is wearing are far more pernicious. The image of a nerd in VR glasses is funny to us now, but just imagine what will happen when Valve releases Half-Life 3 in VR and we all end up sitting for hours, heads encased in black plastic, as we grunt and gesticulate in our desk chairs. VR devices aren’t meant to be taken to bars so no one will give their wearers a solid punch; instead they will pull our distracted psyches further down the rabbit hole of sub-social Internet behavior as we enclose ourselves in a virtual world.

VR will be important. Barring a direct brain connection it will be the closest representation to true reality that we will ever experience in the electronic age. Beaming photons into our eyes is a great way to connect directly to the brain and we, as visual creatures, will lap it up like cream. I have no doubt that Luckey is really enjoying himself in that photo. He’s probably living in some undersea world where fishes swim about his noggin or fighting over demon hordes in a Tolkein-esque wilderness. Once the experience of strapping something onto your head and wandering around the world becomes commonplace – and it will – we’re all going to look like Luckey.

VR is coming. It’s going to change the way we interact with the world. Parents will look back on the days when their kids just wanted to play Angry Birds on the iPad with wistful nostalgia as their kids cocoon themselves into VR-induced comas. The same guffawing Internet users will find that some things – primarily gaming – are better in VR. And the world will change, once again, as VR becomes easier to use and less goofy. We can laugh all we want but right now remember that we’re chortling from the seat of our horse-drawn buggy as the first Model T chuffs down our country lane.

By the way, Luckey isn’t the first disheveled geek Time put on their cover. Way back in the olden days they stuck a kid named Marc on there – barefoot, polo shirt untucked, mom-jeans acid-washed – and said he and his buddies were the harbinger of a new era. A lot of people were fixated on his feet – a scion of business barefoot! On a throne! Instead they should have been fixated on his ideas. 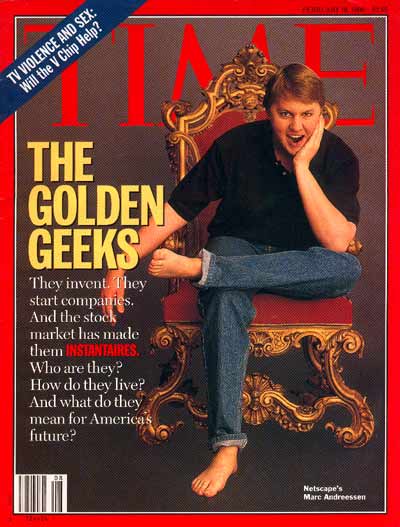