Chinese Internet giant Tencent is getting its tentacles into India’s healthcare space after it led a $90 million Series C round for medical search startup Practo. The startup raised $30 million in February, and it confirmed that Google Capital, Yuri Milner, Sofina, Altimeter and existing investors Sequoia and Matrix took part in the new raise.

Bangalore-based Practo has a two-sided business model which consists of a marketplace/search portal that connects patients with doctors and medical organizations, while it offers practice management software — Practo Ray — that helps it build relationships with the latter. The company claims to have 200,000 doctors, 8,000 hospitals and 5,000 diagnostic centers across 35 cities in India on its platform. It has expanded into Singapore and Manila, Philippines, where it said it has 80 percent of doctors from both cities on its search service.

Following its Series B earlier this year, Practo founder and CEO Shashank ND told TechCrunch that the company had aggressive plans to expand its presence both inside India and overseas into new regions. That remains the case, albeit this fresh injection of capital will expedite those growth plans further still.

Confirming that this new round originated from inbound interest from investors, Shashank said Practo is close to launching officially in six new countries. The company is aiming to be in 100 cities in India and 10 international markets across Southeast Asia, Latin America, the Middle East and Eastern Europe by March of next year.

“We have no CFO right now,” he said. “[Because] as a company we are only focused on the vision. We saw like-minded investors reach out proactively, and when our plans match their plans, we look at what is possible.

“We’re not involved in any asset heavy models, hence all the capital that we are raising will go into building more quality products and expanding geographical impact.”

On that note, Practo has plans to add wellness and fitness to its portal, which claims 10 million monthly searches, and introduce search options for users wanting to connect with pharmacies and diagnostic labs for reports. 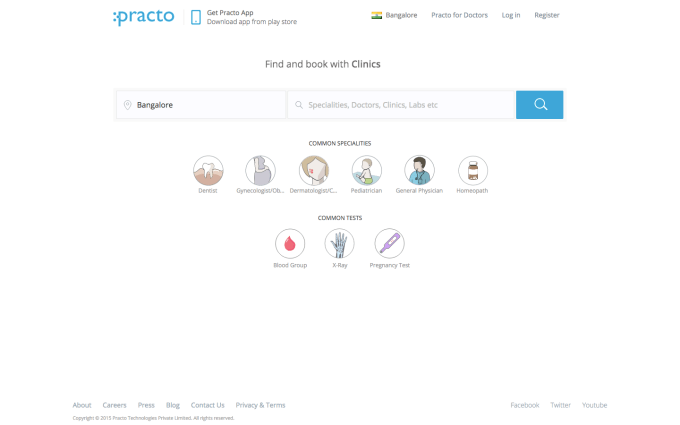 The strain of India’s billion-plus population and the issue of scant healthcare resources in rural areas are issues being tackled by startups that have latched on to the growth of smartphones and mobile Internet as distribution platforms (rival Lybrate landed $10.2 million led by Tiger Global in July). But Shashank told TechCrunch that he believes there is potential to go way beyond India.

“We’re very excited about Asia producing a great platform; health is one area where a platform is missing [worldwide],” he said. “I’m very proud that, with the work we have done, we can say that we will be able to scale this business to build that elusive global health platform. We’re very proud that it will come out of Asia.”

Despite international ambition, Practo has work to do in India. The company has been on an acquisition spree of late, picking up fitness app Fitho in April and e-commerce startup Genli in July. Shashank said the deals will continue to flow thick and fast in order to” bring on great people… and develop our product portfolio and consolidate our space.” The company expects to double its 1,500 team over the next year through acquisitions and hiring.

The addition of Tencent as an investor is interesting, since the company has made few moves in India to date. Beyond providing capital to grow the business, Practo could benefit from the alliance by tapping into WeChat, Tencent’s blockbuster messaging app that claims over half a billion active users worldwide each month.

Shashank wouldn’t be drawn on discussing future collaborations, but, with WeChat (known as Weixin in China, where it is the country’s most popular mobile app) pushing local services and online-to-offline features, integrating medical/doctor search and services makes absolute sense.

That kind of distribution could give Practo a running start as and when it expands into China, but Tencent may also look to use an alliance to grow usage of WeChat in India and parts of Southeast Asia, where it has previously entered into partnerships with Uber rival Easy Taxi.

Note: The original version of this post mistakenly valued Practo’s Series B round at $60 million, that has since been corrected. Apologies for any confusion.