Reddit’s traffic may be climbing amid its recent controversy and turmoil, but the company’s fate is now more questionable than before. And that means it’s time for competitors to swoop in to take advantage of Reddit’s inability to target those users looking for an alternative experience. Voat opened its doors to fleeing trolls, for example, and Tumblr launched its own AMA feature with “Answer Time.”

Today, another new app called Genius Hub is now debuting its own take on an improved AMA experience, with a chat app that lets users talk to influential, well-known or otherwise interesting people.

The idea for Genius Hub comes from William Channer of Panda Network, a startup factory founded by Ahmet Sulek and Channer. Panda puts out a number of products including the encrypted email app SnapMail, an online dashboard for reading top tech and designer news (previously just called Panda), the Slack design community Slackshot, the Dorm Room Tycoon podcast, and much more.

Explains Channer, he was inspired to build Genius Hub after receiving feedback from his podcast listeners. They wanted to know how he was able to secure interviews with people like Max Levchin or Walt Mossberg, for example.

“People seem to be obsessed with connecting with influential folks,” says Channer. “And so I thought maybe I could bridge that gap and make it easy to access in the inaccessible.”

Though inspired by Reddit’s AMA (“Ask Me Anything”) Q&A feature, Genius Hub operates differently. Instead of a website where there’s a lag in posting a question and getting a response (which makes it feel more like a message board), Genius Hub is a real-time chat web app.

“Our focus is on having a conversation right now, like Slack,” Channer notes. “But an AMA is very different from a group chat, so we had to redesign things from the ground up.”

To use the app, consumers actually purchase a ticket to the AMA, which will limit the number of participants, as compared with Reddit. That makes sessions feel more intimate and personal, the creators believe. Their hope is that people will be willing to pay for this kind of experience.

Genius Hub is launching with an AMA featuring Basecamp founder Jason Fried, who will do his Q&A session on Wednesday, August 12th at 11 AM PST. Tickets to participate in these one-hour sessions are $15 each, while it’s free for those who just want to watch. The sales from this first session are being donated to WWF, the website indicates – fair, given that this is something of a beta test at this point. Around 50 tickets will be available for each session.

Fried will be followed by TechStars’ David Cohen on Friday August 21 at 10 a.m. PDT.

Other events will likely fill in the gaps, but the schedule is yet to be determined. Guests will confirm their authenticity by announcing it on Twitter, and session transcripts will later be published to Medium.

Already on the line-up – meaning, they’ve agreed to do an AMA at some point – are the following: 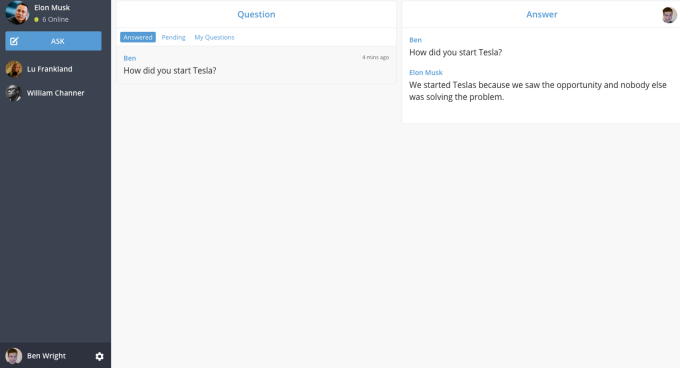 (Not a real session)

For now, guests are largely coming from the tech community, but in time, the plan is to allow anyone – authors, musicians, founders, athletes, actors, brands, or artists – to host their own AMA’s and connect directly with their audience. That could point to the possibility of an expanded business model further down the road – perhaps even the potential for a white-labeled version of this popular “AMA” format.

He also notes they’re looking into the Meerkat API to see if there’s a way to add a video element to these Q&A session.

For now, Genius Hub remains a product from Panda Network, not a standalone company, but the team is talking with investors who are likely waiting to see if the app will gain traction in the weeks ahead. Reddit may be struggling, but it still has the numbers and the brand recognition, which will prove challenging for Genius Hub when it tries to go after bigger names.