Tinder is tiptoeing into the friend zone and the work place. After years of saying “We want to overcome all the issues of meeting new people”, not just dating them, today Tinder will announce its first explicitly non-romantic feature. But it won’t be in Tinder’s app. And it will only be available to the 2,000 or so young movers and shakers who’ve made Forbes’ 30 Under 30 list. 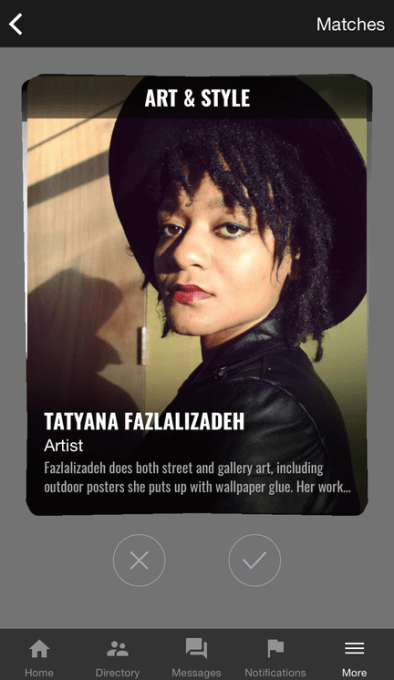 Forbes is building a social networking app exclusively for these millennial leaders, which will launch at its 30 Under 30 Summit in Philadelphia on October 4. The goal is to stoke this community into somewhat of an alumni network that attracts more powerful youngsters to the Forbes empire. It will offer a directory of members, a feed where they can post social media stories or polls, and the option to message each other.

But to break the ice, Forbes worked with Tinder and its co-founder Sean Rad who made the 30 list in 2014 to build a speed-networking feature. Members can swipe through profiles of fellow prodigies of both sexes, see their industry and description, and if both people swipe right, they’ll be invited to chat.

The partnership came about because “Tinder was trying to get into the business networking space,” says Forbes’ Head Of Mobile Products Salah Zalatimo, who came in from its acquisition of his app Camerama.

He tells me Tinder’s founders are “part of the family…it seemed like a mutually beneficial and symbiotic fit. Tinder gets to figure out and learn about getting into the business networking space and we can help our members.”

That doesn’t mean Tinder is rushing in to compete with LinkedIn. Rad tells me non-romantic networking is “not core to our strategy right now.” Still, he admits “Will this serve be a nice experiment? Sure….We think about meeting people as sort of a general challenge. We don’t want to solve it for just one [form of relationship].” 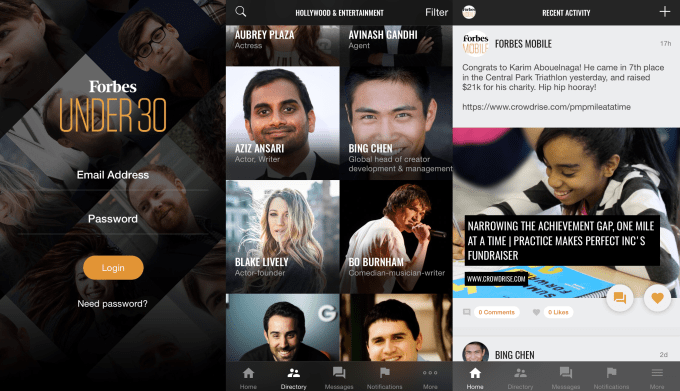 Back on its own app, Rad says Tinder Plus, its new monetization feature that limits your right swipes unless you pay, is doing “incredibly well. We’re pleasantly surprised.” He also tells me that any backlash about changing the rules to prevent people from endlessly Liking everyone has died down.

With over 1.5 billion swipes and 26 million matches per day, starting to earn money hasn’t extinguished Tinder’s wildfire growth. It’s up from 10 million matches per day in June 2014. But with the success of double opt-in connections for romance, Tinder’s widely copied interface could one day let it ignite new markets and use cases. What it learns from Forbes could fuel a way to eventually find friends, mentors, sales leads, or even co-founders on Tinder.