A business publicly debating customer problems on their Facebook Page’s wall is a recipe for a PR disaster. So today Facebook is giving Pages more options for privately messaging people who complain. Along with its Businesses On Messenger program, Facebook is squarely aiming to usurp telephones as the channel for customer support.

Starting today, business Pages will be able to privately message users who leave wall posts or comments for them. Previously, they could only reply in the same channel where the customer started the conversation. Users will be able to message businesses straight from Facebook News Feed ads, and the companies can reply with pre-saved support messages to save time (which we spotted in June). 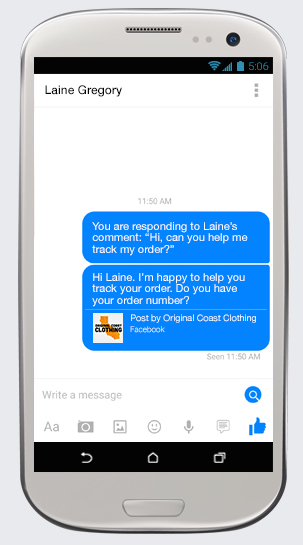 Perhaps most interestingly, Facebook is creating a new standard for customer support response time. Businesses that reply to 90 percent of messages and average a reply within five minutes will be awarded a “Very Responsive To Messages” badge on their Page.

That’s a high bar to live up to that could push companies to hire support staff specifically to respond to Facebook messages. If they’re not ready to handle the load, though, Pages can turn off the option to accept messages.

With the new features, smaller businesses could get some of the social customer support power that big brands buy through third-party Page management tools.

David Marcus, the head of Facebook Messenger, has said in the past that he thinks touch-tone phone customer support is primed for disruption. Synchronous chat just isn’t convenient if you have to wade through phone trees and wallow on hold. Asynchronous instant messaging offers satisfying near-immediacy without the hassle.

Meanwhile, businesses can save on expensive call center employees that only handle one query at a time by using instant messaging support staff that can simultaneously handle multiple angry customers.

That’s why Facebook revealed Businesses On Messenger at F8. It lets e-commerce customers on some sites request support via Facebook Messenger rather than having to call or email to change their order or get help. 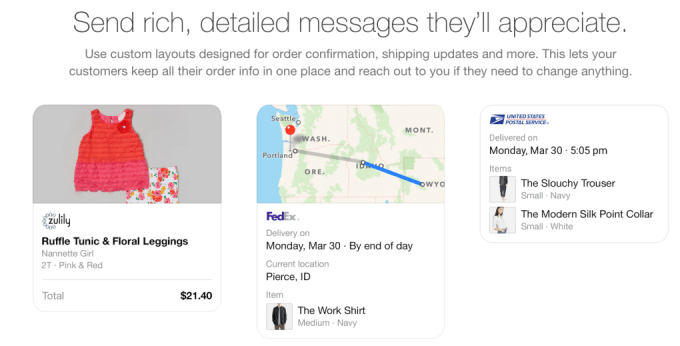 With saved responses, five-minute calls could turn into 15 second re-sendings of pre-made support answers. And Facebook is already working the Businesses On Messenger partners to let them use artificial intelligence systems to automate some of that response process, so humans only step in when the AI gets confused.

Businesses already have a big presence on Facebook, as well as team members publishing content there. Community managers might soon be joined by employees with a new role: “Community Support.”