When we wrote about Amplitude last year, we noted that it’s trying to undercut competitors like Mixpanel with lower prices and a freemium product. Today it’s going even further in that direction with a new plan that offers Amplitude’s basic features for free, as long as you’re tracking fewer than 10 million monthly user events.

“We’re giving away the same thing that Mixpanel charges $1,000 a month for, completely for free,” said co-founder and CEO Spenser Skates. He added that Amplitude is moving away from a pricing model that focuses on the volume of data you’re trying to measure — he called that model “incredibly painful” and “really bad for analytics culture.”

Not that pricing is Amplitude’s only selling point. Skates outlined several features that are meant to give app-makers a deeper understanding of user behavior, by allowing customers to see how different types of behavior are connected.

Those features include the Microscope, which allows customers to click on any data point and see the actions taken by the individual users in that group. There’s Behavioral Cohorting, where you can form different user cohorts and compare them. And there’s the Growth Discovery Engine, where you can examine the behaviors that are most likely to drive user retention and conversion. (Microscope is included in the free version. You have to pay for the other features.) 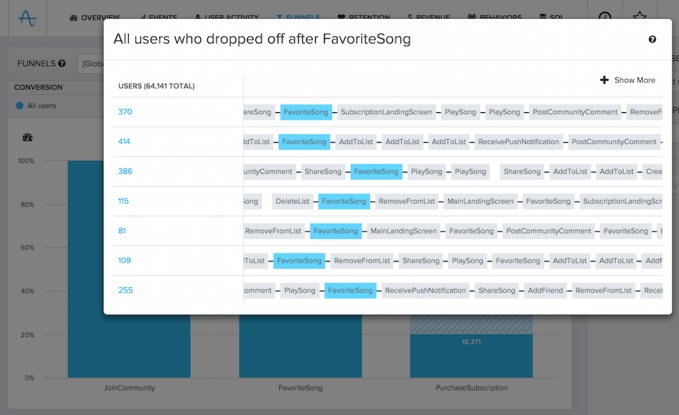 For example, Skates showed me a music app’s analytics dashboard. He was able to create cohorts of users who had added a friend in the first few days versus users who didn’t add friends, or those who added a song to a list versus those who didn’t. Then he could compare user retention between different groups and establish which activities seemed to reliably predict that users will stick around — that’s probably where the app developer would want to spend their energy.

Skates said this allows companies with data science teams to become more productive, and allows smaller companies to perform sophisticated analysis without having to “build out that data infrastructure.” Customers using Amplitude include Nokia, Rdio, Rhapsody, MapQuest (like TechCrunch, MapQuest is owned by Verizon/AOL), DoorDash and Yik Yak.

Benchmark partner Eric Vishria (previously co-founder of social browsing startup Rockmelt) told me he was impressed by the way Amplitude “combines deep tech expertise with business model innovation.” Specifically, he said that while many analytics companies offer a free tier, they still base their pricing on events measured, which is “super counterproductive to figuring out what really matters.”

“Amplitude’s scheme basically eliminates event pricing with those enormous upper bounds, and they are able to do that because of an extremely efficient architecture,” he added.

Amplitude was founded in 2012 and incubated in Y Combinator as a voice-to-text app called Sonalight.