Saida, an app that helps people get approved for short-term loans based on their activity on their phones, launched out of Y Combinator today.

Saida can see how a person, for example, uses their prepaid cellphone plan, such as how often they recharge that plan and what proportion of the plan is spent on data services, voice or text messaging. Users give Saida some information that helps handle all the approval for the loan on a mobile device. Software installed on those phones can help give users a “credit score” of sorts and help them get approved for a loan that can be paid back in 30-60 days. 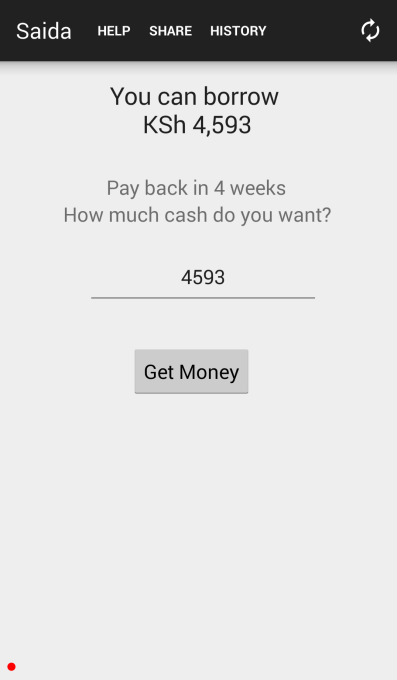 “Right now most of our customers are people who have a smartphone, who are running their own business or who are employed, and people who basically don’t have a credit card,” Kenneth Ngetha said. “That’s the three or four pieces of info from our demographic. The information that they’re able to share is how they are using their cellphone plan. That tells us a lot about their income cycle and how much they earn. We also look at how they use their expenditures — if they have any receipts or the type of phones they own.”

Ngetha said the average wait time for even small amounts of money could be a few days, going all the way up to a week for those without a lot of information to determine a credit score.

Still, that doesn’t mean a company like Saida will end up catching on. Loaning money is generally challenging and if a high-enough volume of users default on their loans — though, Ngetha says that the company will work with those people to try to pay them back — it will turn into a significant challenge for the business. There are competitors like InVenture, and there’s no sure way to know that larger banks or services like M-Pesa won’t decide to aggressively invest more money in something that could capture the entire market.

The service is still in the very early phases, Ngetha said, but the goal is to be able to immediately send funds to a user’s bank account. One scenario the company pointed out was vaccinating livestock against a spreading flu. Saida launched a few months ago and has already generated around 4,000 loans, the company said. The service is starting in Africa, with plans to eventually expand to other emerging markets

“We realized there’s so much info stored on a smartphone,” Ngetha said. “It’s a thing that has been an issue in the past, but one of the things that has made a really big difference is that [smartphones] are becoming very accessible. And the fact that, it’s the same scenario where you find in Latin America, you don’t have enough info about people [to assign a credit score]. Because a smartphone is there, we can do much more.”

Ngetha and his co-founder Kyale Mwendwa have had experience in financial services in Africa for about seven years, he said. The two were working for telco companies, and also mobile banking services when they began popping up in East Africa that allowed customers to access their bank accounts via text messages. The pair grew up in Kenya.

Update: Added additional context around the competitive landscape and other challenges.