Klarismo, which takes existing MRIs and other kinds of body scans to build a 3D model of a person, has raised $2.1 million and launched out of Y Combinator.

Klarismo is an online service where users are able to take a much deeper look at their body’s internal structure. It takes MRI scans and other kinds of scans that people are getting already and then uses that to build a 3D model of the person. That 3D model is then available online, where users can take a look at how their bodies have changed over time — from muscle growth and fat reduction to other things, like what their spleen looks like.

“This is focused on your internals; it’s super interesting if you’re an athlete or trying to lose weight or gain weight or build muscle,” CEO Marcus Foster said. “This is the only way you can actually track whether your body is changing in the ways you want it to. We literally can show you every little bit of muscle tissue you’ve built, or fat you’ve lost inside your body, which you couldn’t see any other way. We let you look at your body in a way you’ve never seen it before.

Still, all this data is seemingly incredibly valuable for companies like insurance agencies and medical firms — which means there’s no way of knowing whether those companies will want to get into it themselves. After all, Klarismo doesn’t control the data it receives. It instead partners with organizations to bring in scans, which other companies could easily attempt or outbid, if that sort of data becomes valuable on a marketplace. 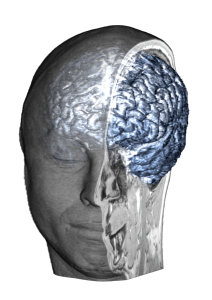 Klarismo currently partners with a number of institutions to produce those full-body scans, which Foster says will cost around $250. The goal, eventually, is to partner with all of the big-name organizations that have hundreds or thousands of scanners around the world, and encourage people to go in and get scanned regularly.

All of that data would be easily searchable to the point that a user could type “where is my spleen” and it would show it on the scan, Foster said.

Foster had ended up in several bicycle accidents and also discovered he had a tumor in his head. That made him question why he wasn’t able to look at a more comprehensive set of data he was generating anyway.

“Typically you get the scan done, a radiologist writes two sentences about it, and then prescribes you some treatment basically,” he said. “You usually don’t get to interact with the data much, even though there’s amazing data about your body.”

“Today the situation is, we only scan people when they’re sick, which means usually it’s too late,” Foster said. “When you’re sick you are already showing symptoms. With disease development, with cancer we scan you when you’re on Stage 3. That’s often too late to do anything about it. We basically thought about, how do we get to a place where people get scanned regularly.”

The new funding, in addition to funding coming as part of being in Y Combinator’s summer class, comes from Khosla Ventures, lowercase capital and Atomico.

The other benefit of collecting all this data, he said, is to generate additional information and research about how the human body works. The company could anonymize the data generated by its users in order to learn more about how parts of the body work, and then use that to discover new strategies and treatments.

“The hypothesis is, if you build a homogeneous dataset of hundreds of thousands or millions of scans, theres gonna be some pretty interesting stuff you can do with that,” Foster said. “Our approach is, how do we get to big numbers like that? We need to build a consumer product basically. And that’s how we came up with this.”