The Venice-based ephemeral messaging app has obviously left its Amazon Prime account in the hands of the startup’s weed dealer, given the copious Hitchhiker’s Guide to the Galaxy references in the description and the very idea that anyone wants to own a $25 towel with Snapchat’s logo on it. 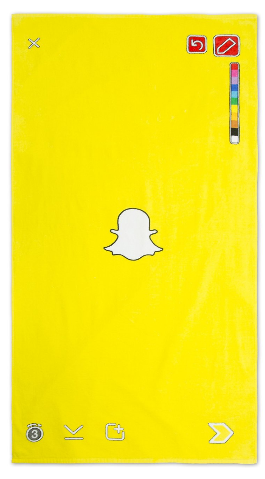 A towel, The Snapchatter’s Guide to Ghost World says, is about the most massively useful thing a Snapchatter can have. Partly it has great practical value. You can wrap it around you for warmth as you bound across the cold moons of Ephemera Beta; you can lie on it on the brilliant marble-sanded beaches of Chillzaan IV, inhaling the heady sea vapors; you can sleep under it beneath the stars which shine so redly on the desert world of Del’etooine; use it to sail a miniraft down the slow heavy Rio Venezio; wet it for use in hand-to-hand-combat; wrap it round your head to ward off noxious fumes or avoid the gaze of the Great Blue Permanatee (such a mind-boggingly stupid animal, it assumes that if you can’t see it, it can’t see you); you can wave your towel in emergencies as a distress signal, and of course dry yourself off with it if it still seems to be clean enough.

Reviews are currently pretty mixed, with one Amazon reviewer giving the towel a pretty measly one-star rating, saying “I placed the towel on the sand it promptly disappeared 3 seconds later.”