People aren’t using Facebook less, according to its new earnings report. Facebook recovered from last quarter’s miss, beating the street’s estimates in Q2 2015 with $4.04 billion in revenue and $0.50 earnings per share. Facebook now has 1.49 billion monthly users, up 3.47 percent quarter over quarter, which was a bit slower than Q1’s 3.6 percent growth.

Analysts had predicted $3.99 billion in revenue with 47 cents EPS. However, GAAP net income year-over-year, the measure of Facebook’s real profit, is down from $791 million to $719 million. That seems to be contributing to the current 1.39 percent dip in Facebook’s share price to $95.53 in after-hours trading.

But in terms of the long-term health of the social network, the most important stat is that Facebook held strong at 65 percent stickiness, or DAU divided by MAU. That’s the representation of how engaged users are, and the fact that it’s not slipping is a good sign as the service competes for attention with Snapchat and Twitter. 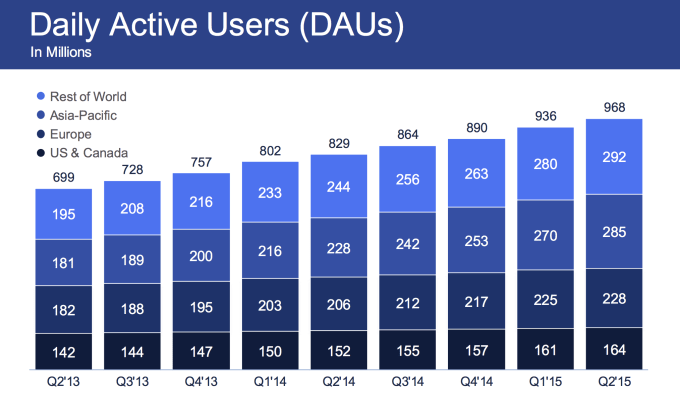 The most interesting stat from Facebook’s earnings call was when CEO Mark Zuckerberg noted that Facebook Events has hit “global scale” with 450 million users. That means it could be ready to get its own standalone app focused on helping people answer the question “What should I do tonight?”

Another important point discussed was Facebook’s playbook for monetizing Messenger and WhatsApp. Like how Facebook delayed ads in the News Feed in favor of first allowing voluntary interactions with business Pages, Facebook wants people to connect organically to businesses over chat before it lets companies pay to reach customers. 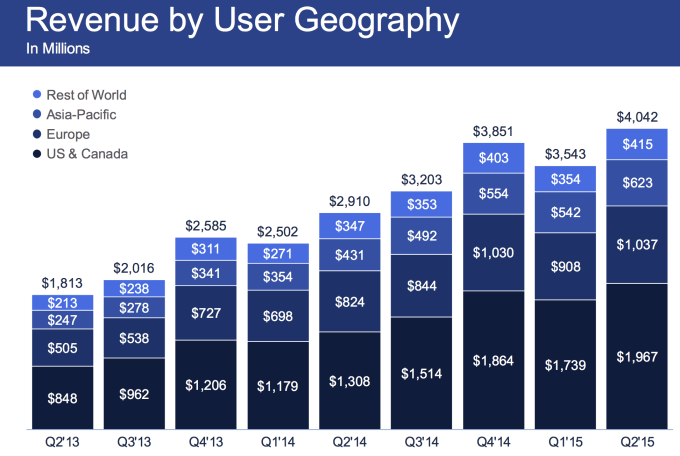 Facebook spent the quarter aggressively improving its advertising and e-commerce options while trying to pull content inside its walled garden, including videos and Instant Articles.

Meanwhile, Messenger has grown into a behemoth chat app, now hosting 700 million users. The recent rollout of friend-to-friend payments and an app platform could help Facebook deepen loyalty among its users, while relying on its core app’s News Feed ads to earn money.

Improved Instagram ad targeting and formats mean it could start producing big revenue from its photo sharing app. Facebook still isn’t saying much about Instagram or WhatsApp in its earnings report. Unofficially, eMarketer estimates Instagram will hit $595 million in revenue this year. 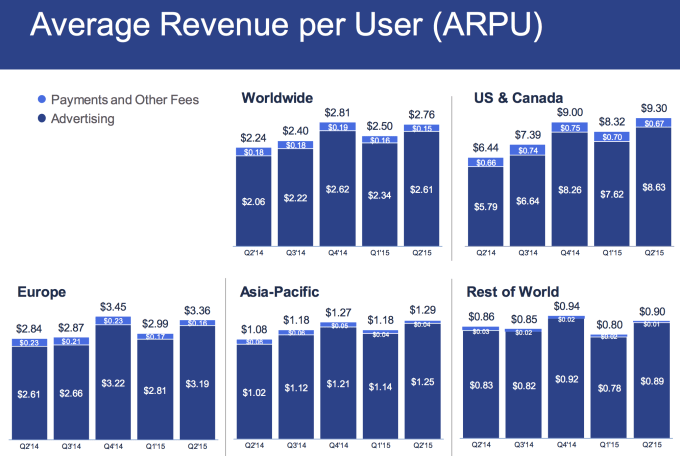 Facebook seems to have solved the ad revenue issue in its “rest of world” region, which includes many developing nations in South America and Africa. The ability to monetize users with slower network connections and older phones is critical to Facebook’s long-term revenue growth, since it’s already saturated user penetration in its key Western markets.

The recent launch of the stripped-down Facebook Lite Android app could make surfing the social network and seeing its ads even easier for people around the planet.

Facebook is only just beginning to see the fruits of its quest to absorb the Internet. In 18 months, it’s gone from hardly showing any videos to becoming a massive host of viewership. Organic clips from users and businesses provide cover, masking the intrusion of auto-play video ads.

With Instant Articles, it’s found a way to turn a giant hole in its garden wall into a new way to earn money. Instead of users slipping out to read articles on news sites or closing the app in frustration as they load, Instant Articles keep users bouncing around inside Facebook’s app where they see ads.

If not for last quarter’s miss that it blamed on foreign exchange fluctuations, this would have been Facebook’s 12th straight beat. And while many were sure Snapchat’s rapid growth would take a big bite out of Facebook’s, the company has continued steady growth. 11 years in, and people still can’t get enough of Facebook.