Twitter reported that its monthly active user count has reached 316 million, up a paltry 15 percent compared to the year-ago quarter, and up from 308 million in the preceding quarter.

The company indicated that it sees 80 percent of its monthly actives as monthly mobile actives. 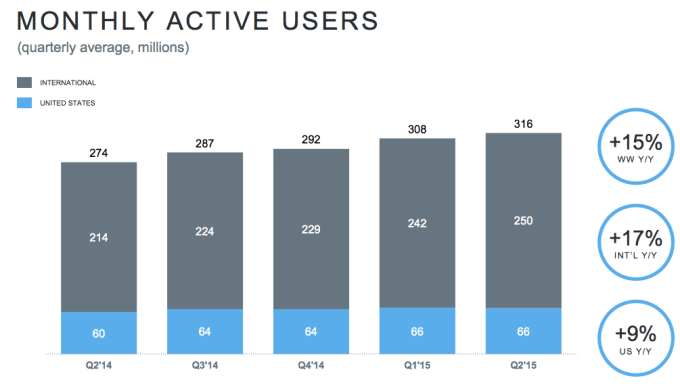 Its interim CEO, Jack Dorsey, addressed the lack of audience growth by saying this:

Our Q2 results show good progress in monetization, but we are not satisfied with our growth in audience.

The company lost a few employees focused on discovery and growth right before the earnings dropped.

Its official call will be Periscoped, even though the company broke out no numbers for that app, or Vine.

You can’t talk about Twitter without talking about how many users it has, since it’s naturally compared to Facebook in almost every way. While its financial results continue to impress even the staunchest of detractors, it’s the lack of measurable user growth, the hockey stick if you will, is what cheeses people off about Twitter.

Forget Facebook’s 1.4 billion users. Why doesn’t Twitter have even 500 million users? What’s stopping people from signing up? This is the next CEO’s problem to tackle, no matter who it is.