Despite being a few feet from Luis Suárez, I was only mildly concerned that he’d be lunging towards me to take a bite out of my shoulder.

But then again, I wasn’t actually a few feet away. I was scarfing down free snacks in a press suite packed with a half-dozen video editors and engineers that were beaming NextVR’s live virtual reality footage of the soccer game to users across the globe and to the very headset that I was wearing. 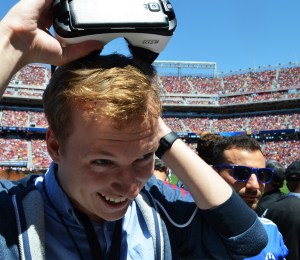 Currently, the company beams the VR footage to users sporting the Samsung Gear VR headset and a compatible Samsung Galaxy phone, since they are really the only consumer-facing VR headsets widely available at the moment, though several others, including the HTC Vive and Sony Project Morpheus will be launching next year.

Taking off the headset, I had a birds-eye view of the game from the suite as NextVR co-founder DJ Roller pointed out the locations of the five VR cameras (packed with ludicrously sophisticated technology) strategically positioned around the stadium.

The technology put me right beside the net to catch Man U’s Jesse Lingard score just past the hour mark, and I was really able to assume different perspectives throughout the game thanks to the multiple viewpoints which automatically switched to keep in line with the action happening on the field.

I got to take a closer look at the cameras themselves as I ventured down to the field with the NextVR team, passing through Levi’s Stadium’s patently luxurious VIP lounge in the process.

I attempted to grab a cheap beer from the BNY Mellon Club Lounge, all while overhearing a couple suited gentlemen chat about “growth equity,” only to be informed that a wrist band was a must to score a drink. As I walked away dejected, I overheard some major shade from the bartenders who said that someone who tried to order a Bud Light in the VIP section probably didn’t belong there. 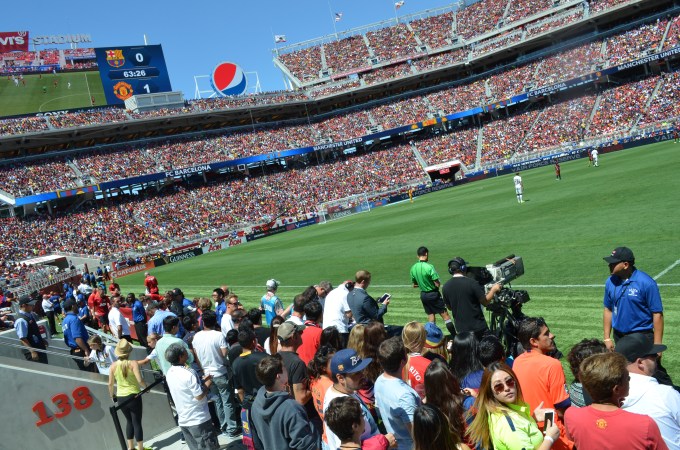 In all honesty yeah probably, but on the other hand, this technology had already put me field-side moments earlier with the same great view of the game as the bar’s. This is really the empowering part of this technology: putting viewers feet away from their favorite athletes with views that would otherwise be unattainable to Bud Light aficionados.

Note: I do realize that Bud Light tastes awful, but I too am sensitive to the fact that even crappy beers are like 11 bucks at these things.

From the vantage point of the field I got to take a look at one of the actual NextVR cameras itself, a surprisingly compact device powered by two Epic Red Dragons that take in the spectacular view with impressive accuracy. At other events, NextVR has utilized its full 360′ camera rig that sports a couple hundred thousand dollars worth of technology to give viewers insane, encompassing detail. From there, NextVR’s real magic begins, as the raw feed is encoded with sophisticated compression, while accounting for image depth, giving users a live view of what NextVR’s co-founder David Cole calls the event’s “3D mesh.” 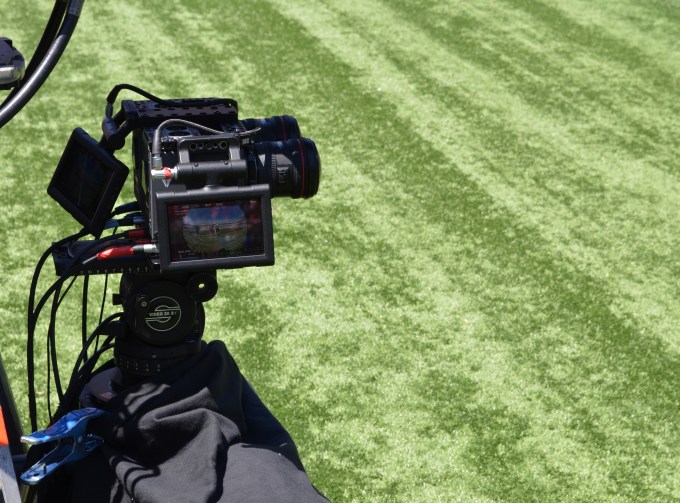 “The cameras are responsible for capturing a very high-fidelity video image. We’re capturing 24,000 pixels horizontally by  6,000 pixels vertically at 60 frames per second,” Cole said. “Our cameras survey the environment in real-time and build a 3D mesh of the world that actually gets translated down to the end-users.”

Looking to the future, Cole detailed his excitement for platforms that offer support for “full positional tracking” with six degrees of freedom, which will allow viewers an unprecedented virtual experience. What that means for viewers, according to Cole, is that “if there’s a ref standing in front of the camera, you can actually look around the ref and see the field a bit.”

The real-life experience at the stadium was a blast, and parts of that will always be impossible to replicate no matter how engrossing VR technology becomes. When it comes to sitting on the couch and watching the game from home though, I don’t doubt that technology like NextVR’s will bring viewers closer to their favorite teams than ever.

NextVR has set itself up in a pretty stellar position to be on the forefront of broadcasting live events, whether they’re sporting events, music performances or award shows (all of which Cole specified the team has been working on), and as more and more consumer devices are released to the public it’s going to be killer to see how the experiences offered by NextVR and others evolve.

I walked away from the game floored by the potential for this technology, and I had a while to think about it as I sat in traffic for two hours trying to get out of the stadium’s horrifically-designed parking garage, which those watching the game from the other side of the globe were spared the cruel (virtual) reality of.