One of the biggest problems with the Twitter-owned live streaming app Periscope from day one has been its notification system. While push notifications are a useful way to immediately discover which broadcasters you follow have just started a live stream so you can tune in and join in real time, its lack of granular controls meant users were faced with what could often be a deluge of alerts. And frankly, it got annoying. So annoying that, sometimes, users would just turn off push notifications altogether.

Today, Periscope is addressing this problem with the release of a new version of its iOS app that, at last, includes more granular control over your notifications. The app also now includes support for iOS 8 Handoff, which means you can watch Periscope live in your Mac’s Safari web browser.

First, with “Mute Users,” as the silencing feature is called, Periscope allows you to configure on a per-user basis whether you want to receive an instant alert on your smartphone that an individual you follow is going live.

If you choose to mute a user, you’ll still be able to view their broadcasts in your main feed within the Periscope app, but your phone won’t buzz incessantly with alerts. This can be especially helpful for those busier broadcasters you follow, or those who you only want to tune into on occasion – like when you’re bored and browsing through Periscope in search of someone or something to watch.

Previously, Periscope had offered the option to mute notifications for three hours, but it was more of an all-or-nothing switch. The company had also earlier faced complaints about its app’s noisiness, as it used to notify you every time someone followed you. After the initial ego boost confirming your popularity (ha!) the feature became so frustrating to users – who then vented so loudly – that the company ended up turning off those notifications by default.

More broadly speaking, the idea that push notifications should be used somewhat selectively when it comes to video content isn’t an idea that’s unique to Periscope, however – YouTube also recently rolled out an updated app that allows viewers to receive notifications when their favorite channels are updated. Similar to Periscope’s per-user “mute” setting, YouTube’s notification feature is something that’s controlled at the channel level, not the app level.

The new mute option will likely be something that’s welcomed by those who imported their Twitter contact lists into the app, and then proceeded to follow a large number of favorite accounts only to later realize their mistake as the app grew in popularity.

Of course, now, to quiet things down, you’ll have to make the adjustment on each noisy account you’ve had enough of – and that could still be a time-consuming process. 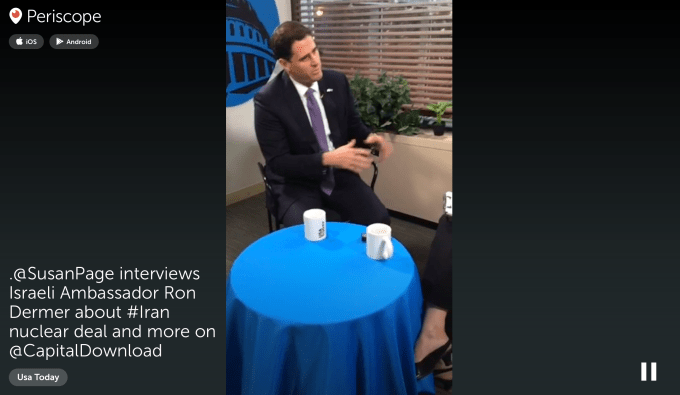 While “mute” is one standout feature in the new release, the updated iOS app also includes a few other new options, too, including the ability to view your viewer stats for past broadcasts, and the ability to set your language preferences so you’ll see more relevant videos in your global list.

But even better, the app now allows you to move between devices thanks to added support for iOS 8 Handoff. That means you can now watch Periscope live via Safari on Mac, for example. (The company recently added support for web replays, we should note.)

Handoff requires that both devices are available via Bluetooth, and are being used with the same iCloud account. It also requires you’re on iOS 8 and a compatible version of OS X. (More info on how to setup Handoff on your devices is here.)

Start watching a broadcast on one device and seamlessly transition to another with iOS 8+ Handoff support pic.twitter.com/h9o9POfA83

The mute broadcasters feature has not yet made its way to the Android version of Periscope, which still says you’ll need to unfollow users to stop receiving their alerts.

Correction: In tests, we had trouble getting the feature to work with Chrome. But Twitter’s own video shows this is supported.