Following the arrival of stronger-than-expected earnings last week, radio service Pandora this morning announced the expansion of its “Sponsored Listening” ad product, which is now being made available to all advertisers. The product, which was first introduced this past fall, was said previously to be scheduled for a launch in the second half of 2015. Instead of more interruptive ads, similar to what you would hear on terrestrial radio, Sponsored Listening lets users opt to watch a video or other rich media ad at the beginning of their Pandora session in exchange for an hour of commercial-free music.

These ad units, which require at least 15 seconds’ of users attention, can now include things like a swipeable slide gallery or a 360-degree product spotlight, in addition to video – the latter which was the only ad format initially available when the product first launched into beta. The idea is to capture users’ uninterrupted attention for a brief period of time, while making sure that these ad impressions are not lost, the company explains.

While the ads require at leas the 15-second engagement period, they can run as long as two-and-a-half minutes. The ads are also only available on mobile devices through Pandora’s app. This targeted roll out makes sense, as the company has said before that 80 percent of its active listeners are tuning in on mobile devices. 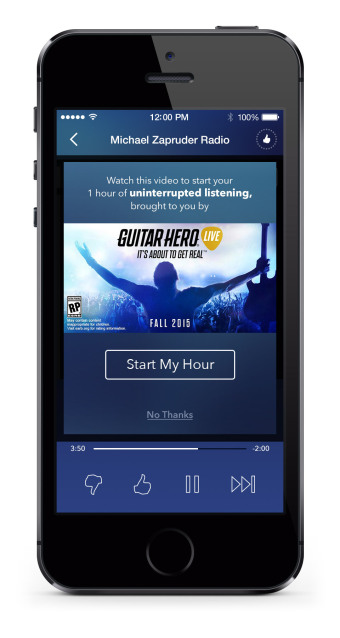 When the product first launched, it was only being made available to select advertisers, including Fox and Sony PlayStation, in a limited beta trial. Since then, Pandora has signed up around 20 advertisers including Land Rover North America, which is continuing its ads after the beta, as well as Corona Extra, Gatorade, truTV, and Yuengling, to name a few.

According to Pandora, Sponsored Listening accounted for a 12 percent lift in brand awareness for its advertisers, and a 30 percent lift in purchase intent. The company says the option also resonated with consumers, noting that –  even though it was only tested with a small subset of Pandora’s user base – over 4 million unique listeners chose to try the option. The company declined to say how many returned to try a second time, however, only saying that some had made it a “recurring habit.”

With today’s general availability, Sponsored Listening is being opened up to all advertisers as well as Pandora’s 80 million active listeners.

The impacts of Sponsored Listening have already been felt at Pandora, where ad revenue is a significant part of Pandora’s business. This past quarter, Pandora reported its ad revenue accounted for $230.9 million out of total revenue of $285.6 million, representing a 30 percent year-over-year increase. In addition, total listener hours were also up by 5 percent year-over-year to 5.30 billion, the company said.

“As the competition for consumer attention continues to intensify, brands are looking for advertising products that can help them create a lasting impression and resonate with their target audiences,” said Lizzie Widhelm, Pandora’s senior vice president of advertising product strategy and sales, in a statement about this launch.

Pandora is not alone in turning to sponsored sessions as a money maker. Ads, and video ads in particular, are being used now more than ever to help digital music services monetize their audiences, including those from Pandora competitors, like iHeartRadio, which offers video ads of its own. Spotify, too, though it’s focused on converting free users to subscription customers, is also offering “video takeover” ads in select markets on the desktop, and “Sponsored Sessions,” on mobile and tablets. The latter is similar to Pandora’s product, but, in Spotify’s case, users have to watch the entire video spot in exchange for 30 minutes of listening time.

Pandora’s expansion of its Sponsored Listening ad product comes at at time when there’s increasing competition in the digital music space, which notably now includes the addition of Apple Music. The new service also includes a radio component and curated playlists that could pull attention from a radio service like Pandora over time. But Apple Music is now facing antitrust probes because of its industry position, its push for exclusives, and its ability to extract a cut of the subscription revenue of rivals. It remains to be seen what effect Apple Music’s launch will have on the wider streaming music industry as a whole, or how it will impact the usage of competing products.