If you want to stream your music instead of buy tracks, there are more options than you can shake a stick at. You’ve got Spotify, Rdio, XBox Music (Microsoft), Amazon, Apple Music and Google Play just to name a few. One of the players, Google, which happens to have the world’s biggest search engine, has chosen to only recognize a few of them (that we can tell from doing simple Google searches and seeing previous participants).

In an ad unit called “Listen Now,” which Google has been testing for a while, when you Google a song name you’re presented with a few streaming options…essentially links to try out Google Play, Spotify and Amazon.

No Apple Music even though the test used to include the Apple-owned Beats streaming app. So Google’s test has yanked Apple out completely (Or Apple pulled Beats, ala the test screenshots in August): 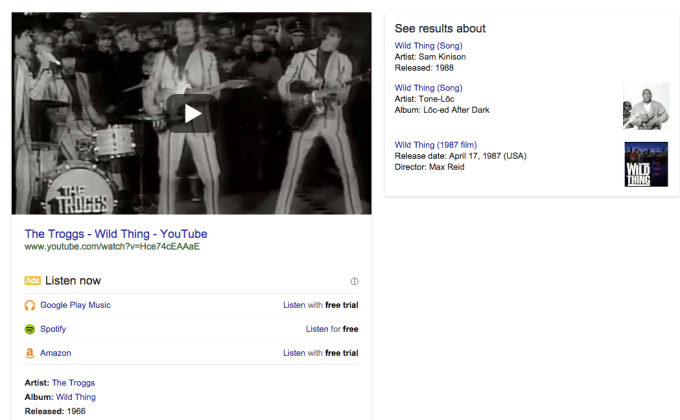 These “action ads” are the latest thing that Google is working on, which are way more interesting than its existing ad links that show up at the top of results. In addition the “Listen Now” flavor, you can “Watch Now” and have food delivered to you right from search results.

There’s no obvious rhyme or reason as to why certain companies are featured in the ads. Maybe they’re partners or maybe they’re paying for it?

While Taylor Swift doesn’t play nice with everyone in the streaming space, we do know that she plays nicely with more than just Google (Ahem, Apple.): 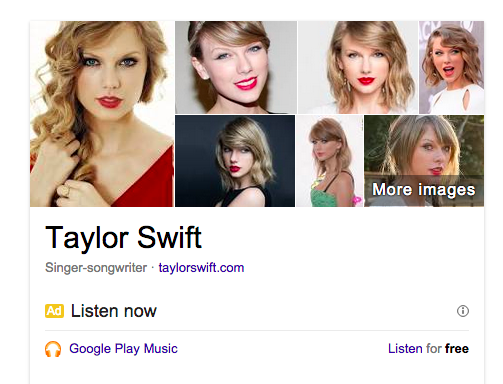 In fact, her latest album (1989) isn’t available on Google Play Music at all for streaming (you can buy tracks or the album)….only Apple Music. Crazy, right?

Kind of, but not really.

This is obviously a big deal because given Google’s search market share, which always rides higher than 60 percent, it can make or break a business for a company. Sure, Apple probably doesn’t *need* Google to make its Music a success, but Google is probably not interested in helping them launch successfully. I mean, the other services have links to web pages, but Google could easily send you off to iTunes if it wanted to. It doesn’t. I do have to point out that YouTube offers links to buy tracks to songs on iTunes, so there’s that.

The really interesting part is that I guess Google isn’t afraid of Spotify or Amazon, at least not enough to bury them a little bit…or completely like they have with Apple.

Nobody at Google is talking about it, since the Listen Now ad is “only a test,” but we’ll be keeping an eye on the options it gives you.

Think Google will end up Playing…nice? OK, that was awful.