Facebook is marking the one-year anniversary of the launch of its Internet.org service, which enables free mobile access to a selection of web services in emerging markets, with a push to bring more mobile operators into the project.

One key part of that charm offensive is a dedicated portal that provides a go-to resource for operators seeking to connect with Facebook and offer the service — which was first announced in 2013 —  to their subscribers. The site also lays out the business case, in Facebook’s eyes, behind Internet.org.

“As we approach year two, we’ve taken everything we’ve learned from working closely with our partners and are now ready to scale Internet.org free basic services. We’ve made it easier for any mobile operator to turn on Internet.org in new countries through a partner portal that includes technical tools and best practices, improving the process to offer free basic services to the unconnected,” Facebook wrote in a blog post. 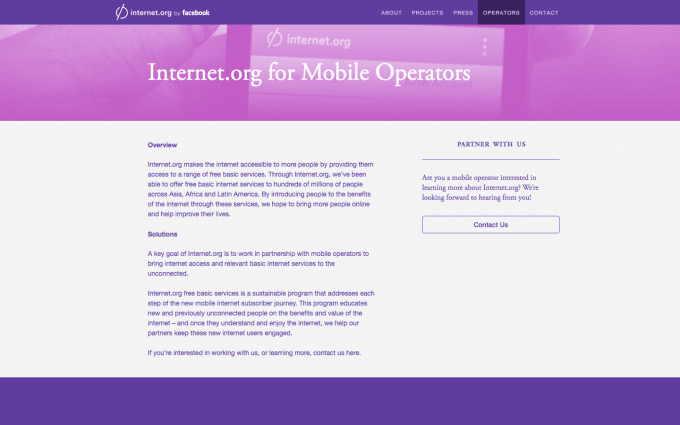 Internet.org began with initial launches in Africa, but it has since expanded to cover 17 countries — including large populations like Pakistan, India and Indonesia — across three continents.

Facebook argued today that more than half of the 9 million users to have used the service signed up for a paid-for data package of some kind within the first month, and that it has directly led phone owners to adopt new services 50 percent faster than they otherwise would.

Those claims are obviously designed to encourage operators to the program, to help them convert customers into data users and smartphones, but Internet.org has attracted plenty of criticism for violating the principles of net neutrality.

Mark Zuckerberg has refuted calls — loudest in India — that by constructing a program of pre-selected services, Facebook and its operator partners play the role of gatekeeper rather than encouraging a free Internet.

Facebook responded to that accusation by opening Internet.org to third-party developers, theoretically enabling anyone to add their services (although there are cost considerations and operator-set regulations to content with), and today it said that the ratio of paying users adds further validation to its efforts.

“These points show that Internet.org is not only a successful tool in helping bring people online, but it is successful in showing people the value of the internet and helping to accelerate its adoption,” the company wrote.

The net neutrality argument will continue unabashed, but it’s a very important part of the package. Facebook is hoping that operators will put these concerns to one side and see the business value that it claims Internet.org can deliver.

It will be fascinating to see whether we see an uptick in new launches or operators exercising caution in handling this potentially hot monetization potato. (Facebook and Internet.org could face regulation in India, for one place.)