Got a startup idea? That and some cash is all you need to get a fully functional app built for you by Gigster. Launching today, Gigster is a full-service development shop, rather than a marketplace where you have to manage the talent you find.

Just go to Gigster’s site, instant message with a sales engineer, tell them what you want built, and in 10 minutes you get a guaranteed quote for what it will cost and how long it will take. Give Gigster the go-ahead, and it will manage an elite set of freelance coders and designers to build your product and give you status reports each week. Once you get your project back, Gigster will even maintain the code, and you can pay to add upgrades or new features.

There’s a massive talent crunch in tech. It can be quite tough for a fledgling startup to attract great engineers, especially if they’re not near a hub city like San Francisco. Gigster could help entrepreneurs affordably develop a minimum viable product so they can get the funding and attention they need to build a company.

The Y Combinator startup is backed with $2.5 million from the accelerator, Greylock Partners, Bloomberg Beta, and Felicis Ventures, plus a slew of top angels like AngelList’s Naval Ravikant, Facebook Messenger’s Stan Chudnovsky, and Twitch’s Emmit Shear. To start building trust in the community, Gigster is offering heavily discounted pricing for the next few weeks, so now’s the time to turn that app dream into a reality.

The Struggle Is Real

“I’ve been coding since elementary school” Gigster co-founder Roger Dickey tells me. “I used to come to school with a different project every few days on a floppy disk.” That love for rapid prototyping led him to build 19 Facebook apps with his company Curiosoft before selling it to Zynga in 2008. There he built the wildly successful game Mafia Wars before leaving in 2011 to start investing.

Last year, Dickey tried building out 15 different ideas in search of a winner. But along the way, he realized just how difficult outsourcing development was. Marketplaces like oDesk and Elance (now Upwork) force buyers to vet tons of different developers and their bids. The work isn’t guaranteed and can vary widely in quality.

While testing oDesk, Dickey and his co-founder Debo Olaosebikan got bids ranging from $22 to $50,000 for the same project. The biggest problem with all of these is that the buyer has to manage the developers the whole way through, which is notoriously difficult and time-consuming. Outsourcing is supposed to decrease your workload, right? Crew and Toptal pre-vet their freelancers, but all the management issues remain.

Gigster fixes this problem by assigning a project manager to handle 100 percent of the management of your developers and be your sole point of contact. If the project is behind schedule, Gigster just assigns more developers to it or fires under-performing ones so it gets done on time.

It only deals with the cream of the crop talent. Just 7.7 percent of freelancers who apply to work with Gigster are accepted. The Gigsters come from companies like Google or Stripe that are looking for some extra projects, schools like MIT and CalTech where they’re trying to earn beer money, or startup founders moonlighting to pay the bills.

They don’t have to deal with bidding for projects or communicating directly with annoying buyers. They just get instructions from the Gigster PM and make it happen. One student earned $10,000 in a weekend completing a project in two all-nighters. 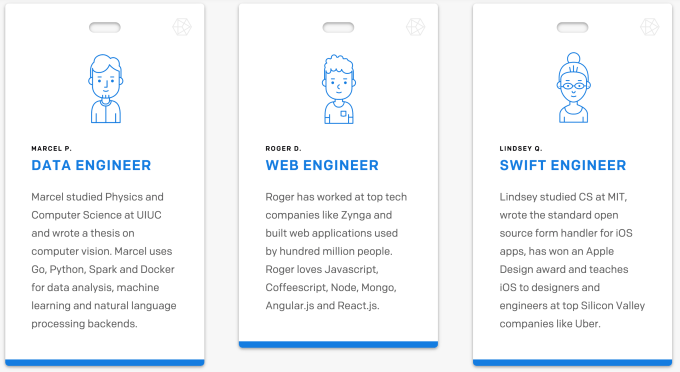 Dickey runs me through the process:

“Say you want to build an Uber for pizza delivery. You get [a Gigster sales engineer] who’ll ask about the details. ‘How do you want to handle delivery?’ ‘Are you going to use your own fleet or a fleet service?’ ‘Does it have to show exactly how long until the delivery?’ They figure out the budget and work schedule, and you pay with Stripe. On the backend, we assemble a team for you of both algorithms and people. You get one project manager, one or more engineers, and a UX/UI designer. The team gets started and you get weekly updates.”

Gigster does have some limitations. It specializes in engineering, not design. Its projects ship with sleek, functional UI, but if a buyer wants some premium beauty splashed on their project, they may have to look elsewhere or let Gigster connect them to someone.

Gigster will also have to build trust. Huge companies like IBM and Infosys get tons of outsourcing jobs because they’re well established. Gigster will have to convince people it’s worth the money to eliminate the management headaches, even if it hasn’t been around too long.

Pivotal Labs might seem like a daunting competitor to Gigster, but it’s more meant for enterprise companies and post-Series B startups. Pivotal’s in-house engineers can even be physically deployed to a client’s office, but that means its expensive rates subsidize its workers who don’t have assignments.

Gigster is designed for smaller startups and products, and its on-demand freelance network means you don’t pay people who aren’t on your project. If Gigster is the Uber for developers, Pivotal is like hiring a personal chauffeur.

Dickey believes he could have built the 15 apps he tried out for $10,000 to $15,000 each through Gigster, when he ended up spending about $1 million without it. Now his heart’s set on smoothing the friction of software development for everyone else. “Outsourcing” doesn’t have to be a dirty word.