PickTrace, a harvest and labor management platform for farm owners, is launching out of beta today.

One of a few AgTech startups in Y Combinator’s Spring 2015 batch, PickTrace is using a system of hardware and software to track worker attendance, productivity, and crop yield.

“Most of the fruit that you find in the produce section — berries, stone fruits, cherries, apples — is handpicked,” says PickTrace co-founder Austin Steed. “You have this large labor force, hundreds or thousands of employees, that family farms are not well equipped to handle.”

Generally farm employees are paid by the bucket, either at flat fee or by weight, to incentivize good performance, according to Austin.

“At the end of the day, the farm has to go back through and add up numbers for each employee, and calculate minimum wage based off of piece rates,” Austin says. “Basically during harvest season you’re constantly doing payroll.”

With PickTrace, each picker in the field is provided with a barcoded ID badge so they can check in when they start. When they finish picking, they weigh their yield at a Bluetooth-connected scale, which automatically captures the weight, location, employee and how long it took.

“We send all of this data to a virtual server, so the farmer can be on his phone or desktop and view real-time analytics around what’s happening in the field,” says Harrison Steed, Austin’s brother and co-founder. 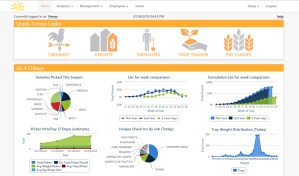 This is clearly useful for tracking employee productivity, but Harrison says that it’s equally as important to know exactly where crops are picked in the field in case of a contamination. For farmers still using a system of punch cards and paper records, this information can be incredibly difficult to track.

“It’s starting to take off now because technology has gotten to the point where it’s cheap enough, and the infrastructure is out there,” says Austin. “Now we can be out in the middle of the boonies and have 4G LTE, which means our system can be 100 percent in real time.”

Austin and Harrison, who grew up on a farm in the San Diego area, decided to launch PickTrace after building software for their own family’s farm and realizing how much of an improvement it was over the existing workflow.

PickTrace is currently working with 11 farms in Oregon, California, and Mexico that range from a couple hundred to a thousand acres and employ hundreds of seasonal employees each.