The NFL is preparing to launch a new version of its Games Pass service, which will now include the ability to watch games on a wider selection of devices, including the Apple TV. According to information posted on the NFL website, the new Game Pass service will also replace Game Rewind, a paid service that previously offered all 256 NFL regular season games on-demand, after they air on television. Game Rewind will be discontinued on July 31, 2015, the NFL site said, and users will be able to move to the updated Game Pass service instead.

The new Game Pass will offer apps for a number of devices, including mobile platforms as well as select connected TV devices like Xbox One, Xbox 360, Apple TV and more. Notably, this will be the first time that the NFL has provided access to full games on Apple TV – currently, the NFL Now channel on Apple TV features news, historic videos, and game highlights, not full games.

The NFL site says apps for these “connected TV” devices are coming soon, but didn’t provide a launch date. Though with the discontinuation of Game Rewind on July 31, the speculation is that this is also when the new Game Pass service rolls out. In addition to connected TV devices, Games Pass will be available through existing mobile apps like NFL Mobile for iOS, Android and Windows Phone, as well as on the desktop.

According to the website, NFL Game Pass will include all 256 regular-season games on demand, some live out-of-market preseason games, as well as the ability to watch older games from the 2009-2015 seasons, including past Super Bowls.

The service will feature tools like a “Scores On/Off” option to hide spoilers, condensed games that let you look back on entire games in about 30 minutes’ time, full replays of every game from 2009 on in high-def, exclusive All-22 and EndZone angles to analyze games, DVR controls including fast forward and rewind, and more. 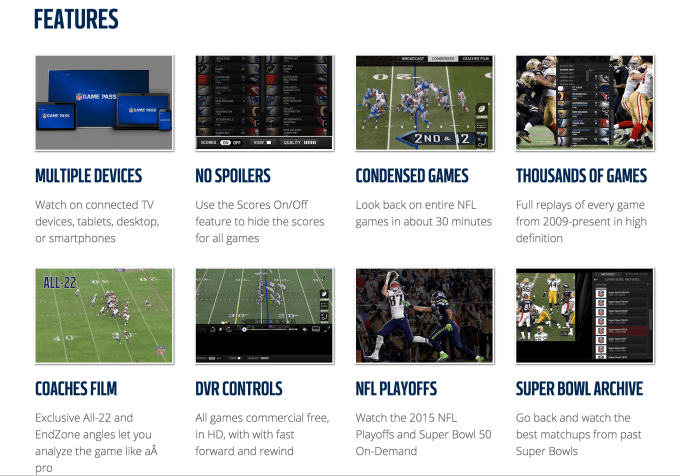 Pricing is not yet posted for the new Game Pass service, but is expected soon.

The fine print on the site indicates that NFL Game Pass includes live access to most preseason games, but those that are not available live will be made available on-demand in the NFL Game Pass archives after the original telecast.

However, Game Pass does not include live regular season, playoff, and Super Bowl game broadcasts – instead, these will become available after the games air on television. That’s not, then, an ideal solution for those cord cutters who are looking for alternative ways of watching games in real time through their many devices – but it would work for enthusiasts looking for replays, or those who want to watch games they would have otherwise missed (e.g. out-of-market fans), or those they couldn’t catch live due to other commitments.

The service will be available to users within the United States, Bermuda, Antigua, the Bahamas, any U.S. territories, possessions and commonwealths (including American Samoa, Guam, Puerto Rico and the US Virgin Islands) and Mexico.

Meanwhile, the NFL’s deal with DIRECTV continues – the NFL Sunday Ticket app will be available in 2015 on more devices, including Xbox 360, Roku and Chromecast for live game streaming, according to DIRECTV’s website. The app also runs on mobile, desktop, PS  3 & 4, and Xbox One. Apple TV, however, will not be supported the updated FAQ notes at this time. (But it’s possible “more devices” will be supported by launch time, the site teases.)

News of the forthcoming Game Pass subscription service has been slowly leaking out ahead of any official announcement by the NFL, thanks not only to the teaser info posted on its own website, but also via emails sent to current NFL Now Plus subscribers. 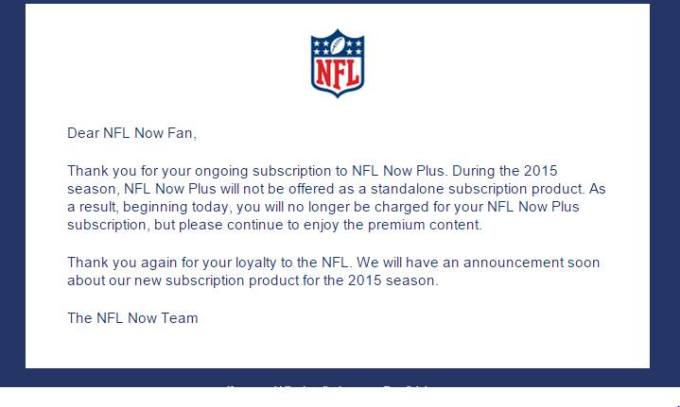 When reached for comment, an NFL spokesperson said while the information posted on the NFL website has prompted some inquiries, the organization is not prepared to reveal the details until its products are ready to launch.