Evernote has made some changes at the top of the company today, naming Chris O’Neill its new CEO and announcing that Phil Libin will be sliding over to the Executive Chairman spot, where he can be “more more actively involved with shaping the next generation of Evernote products.”

O’Neill spent almost 10 years at Google in various roles, recently wrapping up a stint heading up global business operations inside of Google [X]. 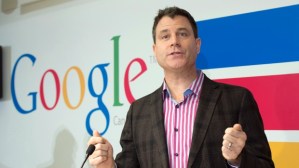 Libin said of O’Neill in a company press release:

Chris brings to Evernote the experience needed to scale the company so that we can create the maximum positive impact on the world. He’s highly regarded as a leader who can grow enormously successful teams while preserving their culture and values. I am both thrilled and honored that he is joining Evernote and look forward to all that we’re about to accomplish.

Evernote famously almost ran out of cash back in 2008, which Libin discussed in 2013.

We panicked. I spent a week frantically calling everyone that I knew.

Seven years later, the company claims it’s the home to 150M users and their various clips and jots.