Call9, a telemedicine startup in Y Combinator’s Spring 2015 cohort, is launching out of beta today to connect patients in emergency situations to doctors on demand.

If a nursing home patient exhibits warning signs of a heart attack, a nurse calls 911 and waits with the patient for an ambulance to arrive. The average ambulance wait time is 15 minutes, according to Call9 co-founder Timothy Peck, and this can be the difference between life and death.

Call9 has developed a 911 alternative for nursing homes, schools, and hotels to use in case of a medical emergency. The nurse, teacher, or concierge can open the Call9 app to immediately connect, via video chat, to an on-call ER doctor. The doctor assesses what’s going on with the patient, instructs the person on the ground how to perform basic medical procedures and administer medicine, and hits a button to order an ambulance if necessary. The app is just part one of Call9’s two-pronged approach to on-demand urgent care. The company distributes mobile emergency kits to each facility, which include an EKG machine, ultrasound machine, and other equipment necessary to perform bedside laboratory tests.

The data collected by these machines is uploaded into the cloud, which means that the remote doctor can see the results of an ultrasound on his screen in real-time and advise the nurse on where to place her hands, for instance. If available, the doctor can also see a patient’s chart and medical history.

Last week, Call9 was put to the test when a trial run with a healthy patient at a nursing home turned into an emergency situation, and it may very well have been the difference between life and death for the patient.

Peck, a Harvard-educated emergency medicine physician, was the doctor who answered the call from the Long Island nursing home, where a patient was complaining of stomach discomfort and constipation. While he was speaking to the patient, Peck noticed that the man appeared to be out of breath, and saw from his chart that he was a diabetic. 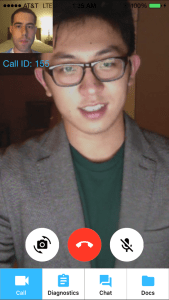 “Because I’m an emergency doctor, I was able to cut through the noise of what was going on,” says Peck. “Patients are always giving you information that may be relevant or not, and I was able to focus in on his shortness of breath and we ended up doing an EKG.”

Peck walked the nurse through the EKG (she had never done it before), and when he saw the results he quickly realized that the patient was having a heart attack.

He pressed a button on the app to call an ambulance, sent a message to the contact listed to alert the patient’s family, and talked him through exactly what was going on while they waited for the ambulance to arrive.

“We checked in on him this morning and he did have a full blown heart attack,” Peck says. “He probably would have died otherwise, had he just been treated for abdominal pain or constipation.”

It may seem a little risky to have non-doctors performing medical procedures in an emergency situation, but Peck says that this is often how professional nurses operate in a hospital setting.

“The nurse is an extension of the physician’s hands, but they are not necessarily trained in every single piece of diagnostic equipment that is out there,” he says. “Part of the reason you have to bring patients to the ER is because all of the equipment is there for doctors to do these hands-on things.”

Peck teamed up with co-founders Celina Tenev, a Stanford-trained radiology postdoctoral fellow, and XiaoSong Mu, a recent Stanford computer science graduate, after years of working in a broken emergency medical system. The group applied to Y Combinator four months ago with what was then just an idea. 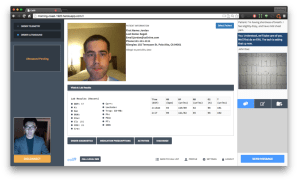 Today they’re working closely with three nursing homes on Long Island, three hotels (including one in the Caribbean) and seven schools across California and New York to validate the concept.

Peck has recruited a handful of his colleagues to take Call9 shifts so far, but the team has a group of 130 doctors standing by, waiting for them to scale.

“ER doctors work in 12-hour shifts, and if they ever want to get extra work, it’s 12 hours of time, there’s no seeing one patient,” Peck says. “With Call9 they can take ten calls at a time, or work for an hour, and it’s a whole different model for them to make extra revenue.”

Call9 is charging a basic subscription fee for the nursing homes, schools and hotels, depending on the medical supplies required and level of employee training. It charges per patient as well to cover the cost of diagnostic tests and the ambulance, if called.

“We’re building something from zero to one: we didn’t make that guy’s life easier, or get him to the hospital faster, we kept him alive,” Mu says.

“In a few years, people are going to be using Call9 instead of calling 911,” says Tenev.